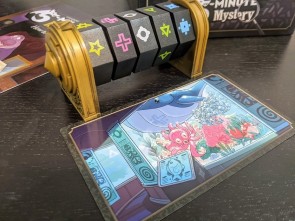 Real time games are a coin flip. They're either superb and you can't stop playing them, or reviled and no one even wants to talk about them. Find out where 5-Minute Mystery falls!

A walrus, who's also the curator of the museum, sits you down.

I need your help. Someone's stolen my macguffin!

Now, it's on you and your friends to work cooperatively to find the "macguffin" before the time runs out. Which despite the name, could be anywhere between five to ten minutes. Already, 5-Minute Mystery had me chuckling, partly through the absurdity of the situation and the comedic artwork. But it goes a bit deeper by referencing the macguffin; a classic genre convention in murder mystery.

The game tastes like a twisted cocktail of two parts Where's Waldo, one part Guess Who, and a dash of whiskey. A drink fitting of Phillip Marlowe.

You start by getting a handful of suspect cards and selecting a scenario.

First thing you'll need to do is find clues by scanning picture cards, or crime scenes, for hidden symbols. In each picture there are five different shapes: star, cross, circle, square and triangle.

Then you get to play with one of the most satisfying board game components I've played with: The Codex. It's hard to quantify the tangibility of this component, but it's so satisfying to play with. Essentially it has five hexagon rings, with each dedicated to a shape type. For example, the star hex might show a star filled in on one side, an outline on another, and on another have the star inside of the circle.

Did you get it right? 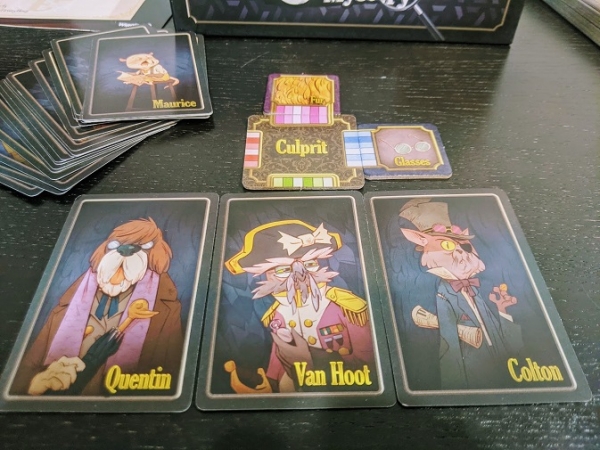 If the shapes on your codex match the back of scene card you'll engage with the second uniquely fun mechanic: clues.

Flashback to the start of the game for a second, imagine it's all black and white, and the rain is puddling outside. At the start of the game, you divvy up the all of the suspect cards between players, and pick a single suspect token from pile of tokens. This suspect has a coloured barcode on each side of the back of the token matching the four types of clues.

Back to the present. You'll be drawing clue tokens such as a monocle, or an umbrella, and they'll have a similar barcode. If they align with the suspect, it means the clue is correct. Otherwise, it tells you the clue is incorrect, which is just as important.

It's quite difficult, at least to begin with, to find the hidden symbols and work The Codex efficiently. So when you get it right and are rewarded with a clue, you feel the dopamine rush. But when you draw a matching clue, oh boy! It's like a shot of adrenaline to the heart. You've eliminated so much work for the team, it feels fantastic.

Either way, you're eliminating suspects through these drawn clues. Continuing until you've either eliminated enough of the suspects to make a guess at who the culprit is, or more likely, run out of time.

In that case, you'll need to channel your inner Hercule Poirot and use all your deduction skills and uncovered clues to accuse one of the animal's of the crime.

Get it right, and you win the game. 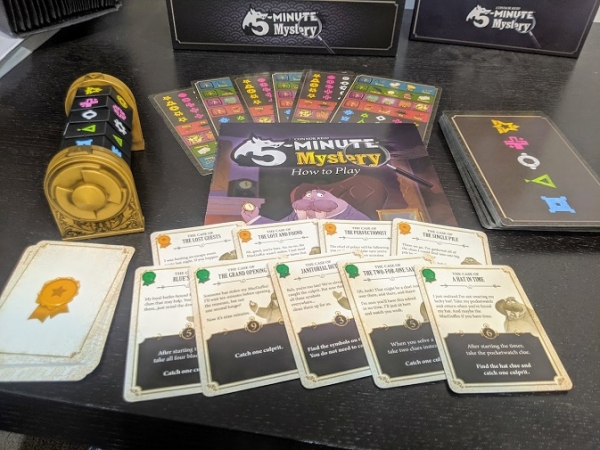 Your time is up, chump

Like the predecessor 5-Minute Dungeon, Connor Reid understands what's needed to make a real time game fun. These two competing objectives of finding symbols, and deducing bad guys create fun and frantic gameplay. Where your attention is split, making you constantly reprioritise what's important right now. This puts a lot of pressure on you which is exacerbated by the stupid stuffy walrus counting down.

The pressure you feel from this timer is no joke. The energy it creates is palpable, and you'll be amazed at how quickly the time passes when you're staring intently at the images on the table. 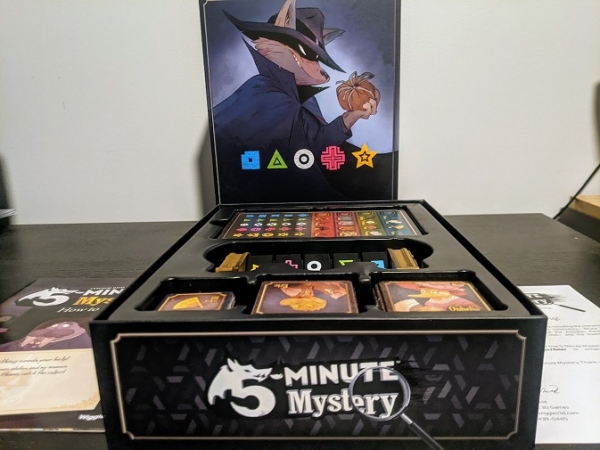 For me, 5-Minute Mystery is a blue moon board game. It's fantastic. One of my favourites from 2020.

But only when the conditions are right.

The box recommends 1-6 players, but I wouldn't recommend playing it with more than 3.

Everyone will be wanting to smoosh their faces as close to the crime scene cards as possible. Leaving some doing all the work, while others unable to get a good look, spend the time wondering what else they can play.

Then the rule book recommends a mini campaign of five games in a row.

Any more than 3 and you're going to start to wear out the mechanic of the 5-Minute Mystery. This is a fantastic game for people with large collections, but if you're playing 5-Minute Mystery every night. It's going to wear very thin, very quickly.

It's best left for once in a blue moon.

Despite saying this, you'll be surprised at how often a blue moon appears. It's one of my most played games of last year. Due to it's quick setup, teach and play. It's easy to break it out when you have 10 minutes to play, and serves a perfect bookend for almost any game night.

If you're looking for another game which fills the same void as Connor Reid's 5-Minute Dungeon, then 5 Minute Mystery is a must have.

September 09, 2021
Rating
4.0
5-Minute Mystery
Another real time gem from Connor Reid! I can see it becoming tiresome over extend plays, so best to only bring it out occasionally. Otherwise, unleash your inner sleuth and find out who took that macguffin!
D
DavidNorris Top 50 Reviewer 10 reviews