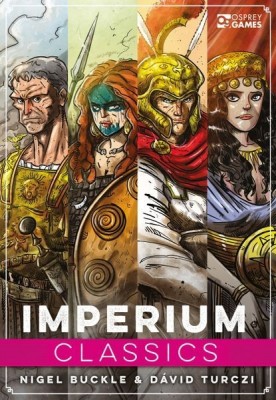 This well crafted deck-builder allows you to rub shoulders with the titans of history, and extend all of your spare mental energy into creating the best civilization as possible.

The tapestry of history

Every civilization has to start from somewhere. Be sticks and stones, the invention of steel, or a deck of cards. In Imperium Classics, you'll be starting with three; a development deck, a nation deck, and your draw deck.

It's a deck-building game, where whenever you run out of cards in your draw deck, the top card of your civilizationbased nation deck is added. This way, despite using a common marketplace to gain a lot of cards. Your deck will have a strong influence of the civilization you're playing as.

Leading to the main draw of Imperium Classics: the constant drip-feed of flavour.

Every card tells a story, every deck a tale. By the time you've finished the game and counted points you have a chronicling of what happened to your people.

It's evocative, and not through the written word. It's the mechanics of the game, pulling out the theme like an expert surgeon pulling out a heart.

For instance, at the overarching level you have the Persians whose focus is on conquering other nations, the Romans who want to expand their land and use it to gain glory, or the Celts who are out to cause havoc to anyone in reaching distance. All resembling the civilizations from history.

Then you drop a level.

Each game your civilization starts in the barbaric state. But as time passes and you cycle through your draw deck. New technology, and culture is seeded into your society, until it raises above the chaos and becomes civilized. At this point your people no longer see the benefit of the old ways, forcing you to change from using barbaric cards to using empire cards.

This is one example, but the game is littered with thematic touches. From historic figures who appear once then disappear into the annals of history, to the unrest cards representing wars and infighting. 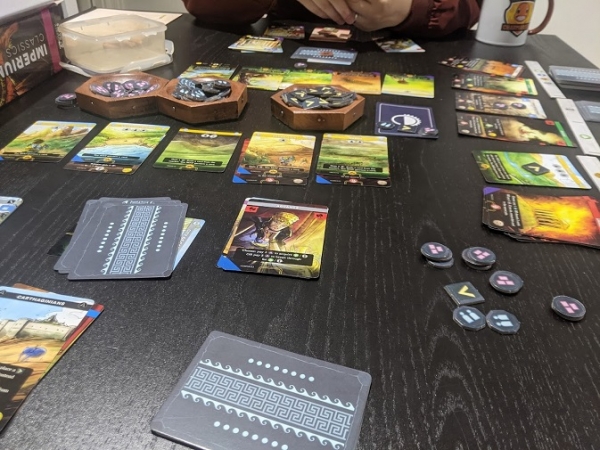 A two player game of Imperium Classics took us between two and a half to three hours. I know there are laws of relativity but two and a half hours is still a bloody long time.

Even still, it's electric getting your civilization up and running, and plotting what you're doing next.

I had the same feeling playing Civilization 5 (the video game) where you can foresee the upgrades and improvements coming. So you end up on this treadmill of goal setting, planning and achieving. It's the reason I've only played Civ 5 once, but I played for 8 hours straight.

Unfortunately, like Civilization 5 there are long stretches of the game where you focus only on the cards in front of you. While with some cards you can attack opponents, it's hard to get a read on who's winning, or how you're doing. Making it at times feel almost solitaire in its experience.

Exacerbating this issue is when you're playing different complexity civilizations, or playing with differing experience levels. Where it may take one person 30 seconds to take a turn, and another 2 minutes. 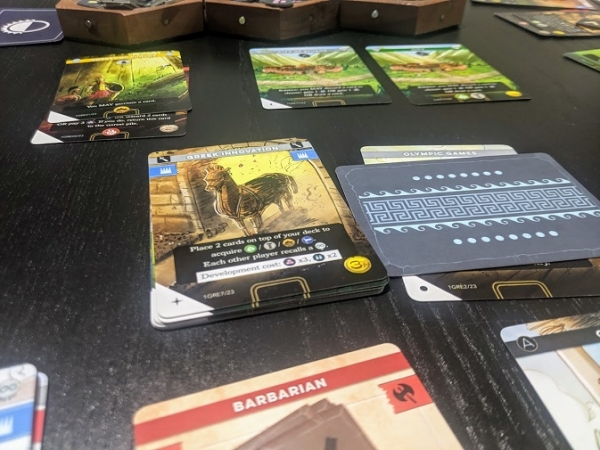 The sun setting on the Roman empire

As titillating as it is to build up your civilization, history has taught us that nothing lasts forever. I found the back half of the game tedious, as I lost sight of the end game condition I was chasing. Often falling back on hastily cycling through my deck to get through my development cards.

At the beginning of the game, there is an entertaining conundrum to ponder. How do you maximise your civilization while racing through your deck to get nation cards? But when you reach a certain point, these power increases suffer dreadfully from diminishing returns. This kidnaps the excitement of building up new abilities, replacing it with the tedium of getting through your deck.

I'm happy to give Imperium Classics the benefit of the doubt here. I played five games from start to finish, and I feel like there's a lot more to uncover within this game. Like once you get familiar with which cards are in which suit so you can form strategies around digging through the decks - instead of focusing on what's in the markets. 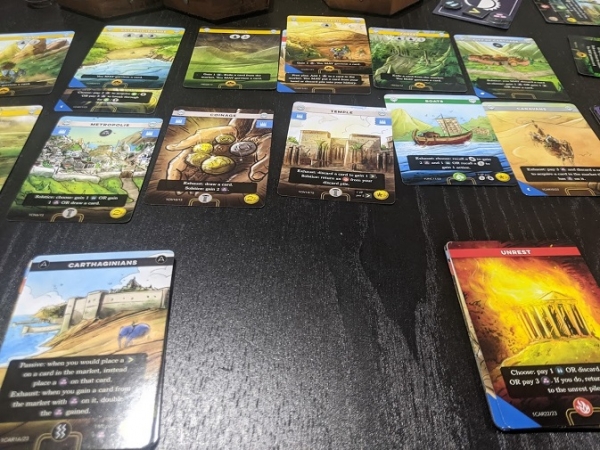 The art has charm to it. It treads the line between too cartoony and too serious. Mihajlo Dimitrievski has done a wonderful job with it. Based on this game I'll be looking out for his future works.

The rule book could be better, I struggled with picking the game up. It gives too brief overview of the major rules, and then hid most of the rules behind keywords in the appendix. Every game had me digging through it to find the conversion ratio of progress tokens.

Then scoring at the end of the game is a right mess. You'll need pens, paper, a calculator, and Charlie Day pointing at a pin up board to get it right.

Even then you'll not be sure you've done it correctly.

After such an epic game, this accounting is hardly the climatic finish you're wanting. But also somewhat expected for a deck-building game.

These complaints are easy to ignore when you're in the thick of Imperium Classics. If you enjoy deck-builders with a bit of meat on their bones, and don't mind a longer play time, with slower and more calculated play. Then Imperium Classics is very good, and won't be out of place in your collection.

September 09, 2021
Rating
4.0
Imperium Classics
Not without its faults, Imperium Classics delivers a deep and enthralling experience that is tempered by the slower second half of the game.
D
DavidNorris Top 50 Reviewer 10 reviews

southernman replied the topic: #326838 29 Sep 2021 12:06
After a few plays of this with three people this should not really be called a deck builder but a deck stripper - you have to reduce your deck to get to one of the main win conditions (and if you want the interest of seeing all your cards) and there is often few reasons to actually buy cards from the tableau, in fact some Civs you just do not want to buy cards at all unless they are very positive for you.
And the rulebook is atrocious for learning the game, there are some aspects of the game you don't even know are there unless you watch a video or see someone mention it in a forum (and I'm a veteran of hundreds and hundreds of rulebooks, most much longer than this one).
In the end it may be fun (over a looong period) to build out your empire but you won't be in for the win doing that, just the experience. I suspect solo against the Bot, I haven't done it (I don't do solo games) may be the best (only) way to play it.

I've not had issues with the rule book. The only major omission is in the solo rules and how to deal with unrest cards. Perhaps Im playing it wrong and just have not realised. The game is a little fiddly. THe main crime as noted in the review, is that it runs longer than it should. At 90 minutes i think this would be a really solid game at 250minutes less so
Read More...