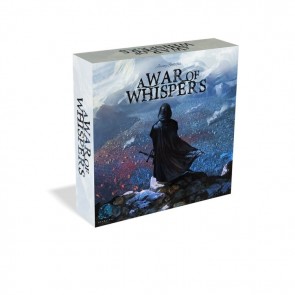 Conquer cities, take forts, and subjugate the populace. However, wars are not won on the battlefield alone. In the courts and palaces, in the corridors of power, the spymasters operate. Behind the crown stand the people with the real power. Stands you.

War of Whispers is designed by Jeremy Stolzfus with art from Tomasz Jedruszek and Dann May, and published by Starling Games. It places you at the centre of a war, in the role of a devious spymaster. You look to manipulate the conflict for your own mysterious ends. When the game begins you’ll shuffle up some tokens to show you which faction you want to come out on top, who should die, and all the preferences you have in between.

Although you will have favourites, you are merely a spy, you don’t own any of these armies. A small phrase, but important. The core of the game is placing agents into the circle of actions that surround the map in the middle (there is something about the circular map of this game I just love). Each faction has 4 spaces to play into, and those are very simple actions for the most part: recruit troops, draw cards, attack. Your actions are open to everyone, there are few surprises there. The wrinkle is that no one knows exactly why you are taking that action. 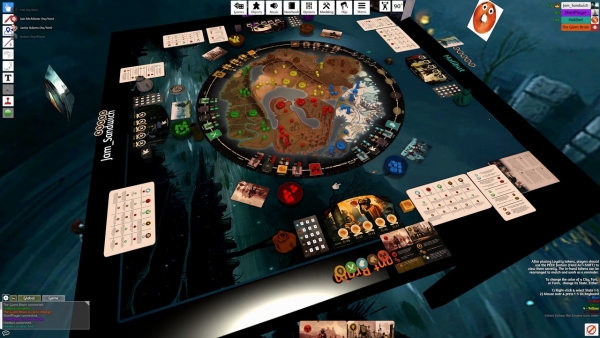 The first moves are made (Tabletop Simulator mod is really good)

Sure I can march the green army into blue territory and capture that city. More cities means more points for those loyal to green at the end. But am I loyal to green? Maybe I am stretching their supply lines thin, setting them up for an attack by another faction.

Combat is fast and deterministic, merely trading troops on a 1 for 1 basis, with a slight disadvantage if you are attacking a fort. The thing with the attack action is that you cannot move troops through their own territory. If you have troops stuck deep within a region, they will make for great defenders, lousy attackers. When you attack you must invade another territory giving the game an intensely aggressive feel right from the off.

With only 4 rounds you have to be bold, taking decisions that will affect the lives of all who call this world home. Each action feels momentous, important, historic. Actions are quick to take, but their impact ripples through the world as everyone else looks at you with the ‘why are they doing that’ look on their face.

I really enjoyed my first play of War of Whispers. It puts you in the driving seat of a war and asks you which road to hurtle down. Your actions are open, your motivations secret. Every decision has weight and heft. You’ll stare your opponents down, backstab, betray, and befriend. Just like a good spy should

This is a first thoughts review of War of Whispers. I played the game on Tabletop Simulator. This is not an in depth review, just my impressions after an initial play. It should not be taken as my final critical verdict on the game. Jamie has bought the game with his own money.

September 30, 2021
Rating
5.0
War of Whispers
A superb distillation of the ideas behind fantasy epics like Game of Thrones in a game that makes you really feel like a spymaster.
T
thegiantbrain Top 50 Reviewer 36 reviews

At the beginning of the game you randomly pick factions and the factor by which they score and they score x3, x2, x0 and -1 (I think that's right but you get the gist). you take actions that help you score highest scoring factions and actions to weaken your zero and negative scoring factions. Everyone's plans are secret but as actions are taken you can get an idea of what factions the other players might favor.

My negative scoring faction was being propped up by two players and looked strong early so I switched them to be my x3 nation. However, I had to reveal may change. If you change any of the factions order of scoring you must reveal it to everyone.

I agree the decisions you make do seem monumental as you can take an early action in a faction area, but if play further back in order you may gain more actions...if you know the game Tokaido its similar to that where if someone skips action spaces others can take more actions depending where they place. Anyway, sorry I'm beginning to ramble and I'm not the best writer so I'll stop.

I came in close second in the end. I put this on my list of games to buy after Christmas.
Read More...