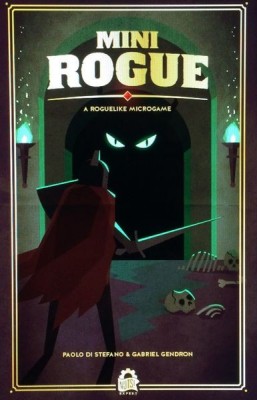 Big surprise in a little box.

Mini Rogue, a solo or co-op two player design by Paolo di Stefano and Gabriel Gendron, has its work cut out for it. There is certainly no shortage of dungeoncrawl-inspired games out there and some very good ones (One Deck Dungeon springs to mind) and it is the kind of small box title that tends to fly under the notice of folks whose attentions are turned to larger, higher profile games. But folks, as someone that in general terms likes exactly this kind of game and especially appreciates its minimalist approach, don’t sleep on this one. It’s been one of the biggest surprises of the year for me.

Look, it ain’t original. Pick an adventurer, fight monsters, avoid traps, loot treasure, go down a level, and do all of the above again. It’s almost boring to write about this kind of game because it’s just such a common thing. But the small box format and tightly editorial design makes for some compelling differentiators, as does a cleanly executed sense of modern graphic design that makes the game look better than many of its peers.

Here’s how it goes down. There’s a Dungeon (or Tower) board that shows where you are. Each floor is a 3x3 grid of cards. You start on the top left, doing whatever that card is. If it’s a monster, you fight and what the monster actually is (regardless of the picture) is dependent on the floor you are on. So there’s no need for an entirely different deck of cards for each level just to show a different picture. Smart! There are also traps, treasures, special rooms, merchants, bonfires, corridors, and other features to encounter, and many functions are likewise impacted by how deep (or high) you are. This kind of baked-in difficulty scaling works extremely well, I think.

Anyway, once you take care of the room you are in, you reveal the next two rooms to the right and below where you are. You get to choose between them, and as the level progresses you eventually wind up in the bottom right of the grid. Once there, you descend a level which means you have to eat a Food (or lose 3 HP), reset any abilities you have, and reset the grid for the next level. If it’s a boss level though, you fight a big baddie.

That’s pretty much the flow of it, if you get to the end there’s a big battle with the main boss for the win. It’s quite challenging, and I’ve yet to make it within striking distance. Some of my failures were due to bad choices and overly risky choices. Others were because of just plain bad luck. But I’ve never felt cheated or waylaid by the game even when I’ve rolled like a chump to my death. The dice system is cool. You have a character die and a dungeon die. Skill checks need a 5 or 6, and sometimes that may do something like avoid a blade trap or open a treasure chest. That dungeon die may affect what happens when you succeed or fail- maybe you get a better treasure, maybe the trap is worse. In combat, you roll both dice and your die is damage- and I’m happy to announce that Mini Rogue features the greatest mechanic in the history of games: exploding sixes. Yep, every six you roll adds another roll. But you have to be careful because there is an X face that renders your efforts moot. The monsters attack based on the dungeon die, with a 1 missing, 2-5 hitting for damage and possible effects (poison, curses, and so forth), and 6 being a critical that bypasses any armor you have.  If you don’t like a roll, you can perform a Feat, which costs either HP or XP, to reroll.

Experience and leveling, which happens through various triggers along with the expected monster-mashing, eventually gives you more character dice and thus better odds at skill checks and higher damage output versus monsters. And – get this – there’s actually the dreaded level drain in this game. Some monsters make you lose XP and potentially dice. This is super bad. But it makes those Ghoul encounters extra spicy and high stakes. I really like how poison and curses add bad dice to your small dice pool – it’s fun and you never know when those statuses are going to hit you.

Now, there’s a lot of opportunities here for stupid, unnecessary game components like dials, heart tokens, poison counter, and whatnot. This game manages most details on tracks, and I am here for it. HP, XP, Food, Gold, monster health, everything is on tracks and marked with cubes. I feel like this game was designed to be as economical as possible and I love it for that.

Yet, despite the small size and compactness of it, I think this is a very robust and full-featured design with a judicious balance of abstraction and specificity. There’s a great campaign option where you can play through a little story and earn progressive unlocks, like a proper roguelike. There is also an optional variant that adds attack stances so you can risk a greater chance for failure against a greater chance for critical hits- I highly recommend this one card addition. I’ve played a lot of games like this, and this is the tightest and most refined I think I’ve played. But it doesn’t feel like a “minigame” at all, and it is an unusually satisfying way to spend a 20-30 minute solo session with minimal setup and tear down.

The co-op game is fine, it plays pretty much like you’d expect and there’s built-in modifications to account for another player. It’s fun to have two different character classes with their unique powers in the mix, but I’ve found that going it alone is really where this game excels. It seems a bit easier with another player, but if that turns out to be an issue there are some difficulty modifications.

There are expansions out there on the way and I’m cautiously stoked for them. It’s a game that has some room for extra cards and variant options to add some complexity, but I am wary that extra content might outstrip the scope and economical execution that make this game unique amongst the competition. But that said, this is one of the best values in games today and a great example of how designers could be doing more  to innovate and explore in the small box/minimal component category.

jason10mm replied the topic: #327548 29 Oct 2021 15:11
How do you think this compares to Iron Helm? The "pick two choose one" sounds kinda similar (though I suppose IH adds a push your luck element to that choice). The art, at least on the card you show, isn't nearly as atmospheric as IH or say, Escape the Dark Castle, but maybe there is more to the aesthetic with other cards.

These games are all simple and throwaway, and not super memorable as far as “I told someone about something that happened in game a year after it happened” but they are a lot of fun at the moment.

ChristopherMD replied the topic: #328104 19 Nov 2021 23:06
Just played a learning game of this. Got about halfway through the dungeon before I ran out of food and died. I agree with everything Michael wrote in the review. They really accomplished so much with so little here that it's undeniably impressive. A neat thing is that it's perfect information when exploring while still "feeling" like exploring because of the grid. Like there's just enough of a sense of movement even if it's ultimately meaningless because you always start top-left and end bottom-right.

There's a little campaign in the back of the rulebook and a small skill tree you can spend campaign points on. I'll definitely give it a shot hopefully soon. I bought it with the Depths of Damnation expansion as that was the one that interested me the most. It adds a few characters/monsters/rooms that are cool and also Lore cards. They're the kind of thing Michael usually hates where you flip a card and read a situation "You come across the body of a dead adventurer, do you?" and then resolve them. But here's the thing, only 1 room card lets you draw a Lore card. With the expansion that's 1 out of 26 cards where only 8 get dealt each level. Also I think the Witch is my favorite character for her Confusion skill. Once per level she can "Apply the monster's attack to itself." hehe
Read More...