Calico is the Cat's Pajamas 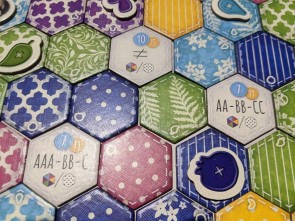 Who doesn't want to play a game about getting cosy with cats?

Seemingly nobody. As cats are in the board game spotlight at the moment with Isle of Cats, Fort: Cats and Dogs, Crazy Cat Lady, and Calico.

However, Calico isn't only about cats.

It's about making them comfy.

Each turn you'll be adding a patch to to your quilt board. Which patch you add, and where you add it, is how you gain victory points. With more complex patterns earning you more victory points. For instance, if you place three patches of the same colour in a group you gain a button worth 3 points. Although if you manage to connect a group of 6 of the same pattern you'll attract Cira the cat, who's worth 9 points!

Beyond these patterns, you also start the game with three objective tiles already placed. These tiles will give you an arrangement to form as well, which can be completed for the colour, pattern, or both. Where completing the arrangement for both showers you in points like cat fur in shedding season.

After placing your patch, you'll refill your hand of two patches from a central marketplace. Continue playing until everyone's quilts are complete and then count the cats and the points you've acquired throughout to find out the winner. 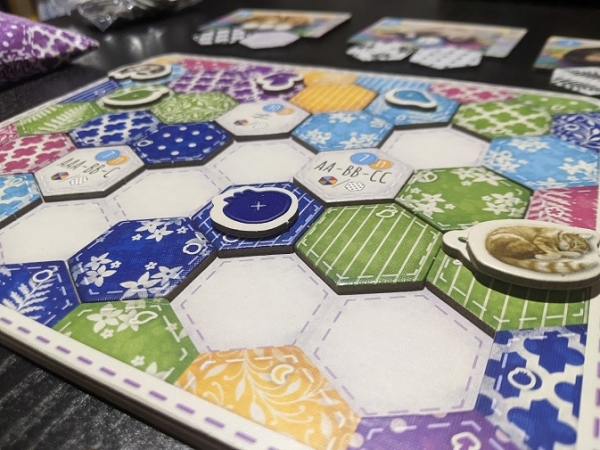 Congratulations, You Just Played Yourself

There's enough going on in Calico that you could fall over, accidentally place a tile, and still come away with 3 points. However, to score the big numbers requires careful placement, planning, and sacrifice.

You start the game with the aim of completing all three objective tiles for both colour and pattern. But with each tile taking a limited spot on your board, you don't have much wiggle room for unwanted tiles. And if there's one certainty in Calico it's you'll never get the tile which is both the colour and pattern you want.

This puts you in the crossroads between what you want to do, and what you can do. You're always deciding what's the best move to do with an imperfect tile, and while you'll do your best to get some points. You'll slowly move away from the big point scorers - those starting objectives - one imperfect tile at a time.

So in the end, you end up playing yourself.

I found I spent the first half of Calico stringing together combinations and having fun collecting cats. And the second half cursing myself for the mess I've put myself into. 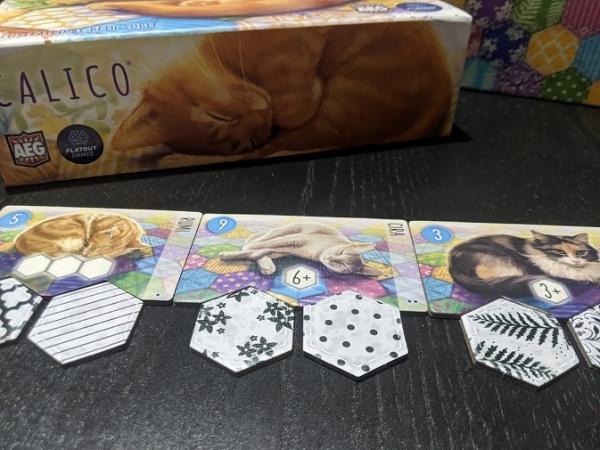 Do Not Believe the Cute Cat

Even after a few games of Calico, you'll still find yourself in the same trap. Because even though you will instinctively pick up how to play the game - it's quite barren on complex rules. When you look at your board, you'll be seeing colours with your left eye, and patterns with your right. Because at its core, it's two puzzles overlaying each other.

It takes a lot of concentration to keep everything straight in your head, and even more to plan out future turns. Making Calico a game where you spend more time looking at your board than your opponents. Which is fine, because even though you're drawing from the same market there's very little interaction between players. Given the game is so tight, there's not even room to hate draft.

Because of this limited interactivity, I found there to be little difference between playing with other people and playing solo. Still, I enjoyed puzzling and tormenting myself over every move. But do not believe the cute cat on the cover, playing well requires deep concentration and heavy thinking. More so than other family focused games. 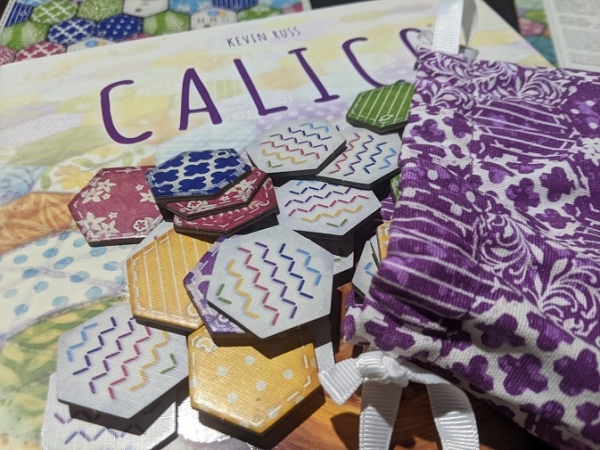 Component-wise I wished they had generic cat tokens instead of individual tokens for different cats. Which is a pain to sort through. Otherwise, the boards are double layered cardboard, which is my favourite type of component. The tiles fit in snug enough to provide the same experience of a well produced puzzle piece. And the illustrations from Beth Sobel are faultless and really brings out the comfy-ness of the theme.

In my eyes, Calico is a good abstract game let down by its lack of interaction. It would be better suited as a smart phone app. If you're looking for a similar tile laying game that is less brain drain and more family fun then it's worth having a look at Barenpark. Otherwise, if you're like me and like the brain drain but prefer more interaction, then I highly recommend Azul. 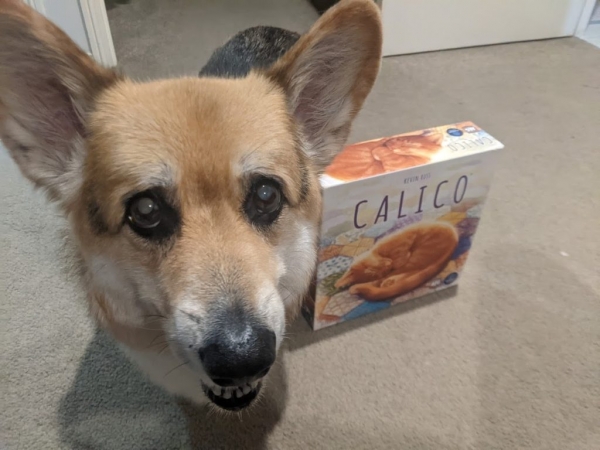 Thanks for reading. Visit Roll to Review, where I'm ranking all games I review. Calico currently ranks 40th out of 80 games.

December 14, 2021
Rating
3.0
Calico
Calico is fantastic if you want to sit down a puzzle for the duration, but if you're looking for interaction with other players your going to be disappointed.
D
DavidNorris Top 50 Reviewer 10 reviews