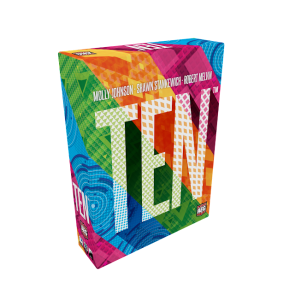 Ten has a lot of promise from the outset. It's based on one of the gamblers core staples, the tense delicious and often painful game of 21 or Blackjack. Except the difference here is that you are not only trying not to bust over the that gateway number of Ten but you are also using the cards you gain to create runs in four different colours.

Ten has a lot of promise from the outset. It’s based on one of the gamblers core staples, the tense delicious and often painful game of 21 or Blackjack. Except the difference here is that you are not only trying not to bust over the that gateway number of Ten but you are also using the cards you gain to create runs in four different colours. Once the main deck is exhausted then points are tallied based on the runs achieved and the winner can be decided.

There’s three types of cards in the deck, the normal value cards have a number and colour that you are trying to get runs with. The currency cards will award you with the associated amount of currency that can be used to purchase cards from the market. Wildcards will allow you to fill in spaces where you are missing all important numbers for your runs. When a Wildcard is drawn then play stops and an auction is held to decide who will win that card. Each player takes their turn to draw cards from deck and decide whether to continue drawing or stop and claim the played currency or number cards. Currency cards minus from the total, while the number cards add to it. Those willing to push further might end up busting if they go over the value of Ten. Interestingly this happens if the total number of currency cards also goes over the value of ten as well which is something else to keep an eye on.
If you decide to stop you can decide to take either the number cards and the option to purchase much wanted cards from the supply and every one else gets some more currency, or you can take all of the currency and the number cards head to the market. There they sit, waiting to be purchased at a later date.

There’s a little bit of complication here in terms of remembering the nuances in the different rules, and while the back of the rule book has a round summary, it seems to miss out on some of the important points that then cause you to need to double check the rulebook until you are 100% sure of what you are doing. Like if you take the number cards, everyone else gets currency. But that’s not mentioned on the back which seems like a strange oversight, even though it’s a pretty important part that helps to balance up the risk reward. I really like the artwork, it’s not only functional but extremely striking and stands out well on the table. Once you’re a fair way into the game, the table will be covered with an abundance of colour and design which I really enjoyed seeing.

Ten needs that risk/reward mechanic in order for it to work. there needs to be the feeling that you are pushing just that little bit forward in order to get the card you need to complete the set. So you need those fly-by-the-seat-of-their-pants players to make it work and raise the excitement in the game. It struggles with that, because once you get the card you really want, there’s never really a reason to push further if you don’t want to. If you manage to get a run of number cards and then tap out after three cards and if there’s no currency that has been played, then the opponents don’t get the intended kickback. As the game goes on the busted and unclaimed number cards end up in a sprawling market. The attraction to play on diminishes a little bit further because you can claim cards and then buy a choice card from the market to fill in the blanks on the runs you are creating. Yeah, you can only buy one at a time, and certain cards are scarce based on their values, but nothing is removed from play apart from the currency cards.

The auctions are good because it allows you to grab wild cards, but again as the game goes on, you might be keeping currency back to buy a card you know you can get without wasting money on trying to outbid someone else. You are limited to ten currency but as many bust tokens as you want, so sometimes you might just push and bust to give you the money for the market down the line.
There’s that need to push forward which never seems to manifest itself, because you’re only really competing against yourself instead of a dealer or another player which is what makes Blackjack and Pontoon so moreish. It all ends up a little bit pedestrian and sterile, and even in the situation where you do get someone risking it all for the luck and glory, all of the real risk is on them. If they bust then the cards they were after end up on market anyhow, and yeah, it will take longer to buy them but you’ll play a reasonable amount of rounds in even the lower player games so it’s not completely out of the question. There isn’t really a huge change in the game when you add in more players, as you never have an effect on the outcome of someone else’s turn, unless you manage to convince them to try to take that one more card in the hope that they’ll bust.
So I can see how it can be fun I think, but it can last too long and too often we were happy we got to the end of the game instead of being happy that we played it. A shame really. I much preferred it’s sibling Point Salad. Five out of Ten?