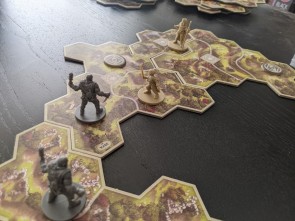 Game Name
The Lord of the Rings: Journeys in Middle-Earth
Publisher
Fantasy Flight Games
Designer
Players
1 - 5
There Will Be Games

After playing through most of the Journeys in Middle-Earth campaign, I was left with a singular thought. Should this game have stayed an app like Slay the Spire, or Armello?

I don't envy any professional who's been tasked to create something new with existing IP. Whatever you make is going to draw comparisons to the original. Then any changes are examined in excruciating detail to see if it all lines up.

If it doesn't. Well, see the fan response on the latest Star Wars Movies.

So let's leave the lore to one side and talk about Journeys in Middle-Earth as though it wasn't based on Lord of the Rings.

Is it still a good board game?

Well for starters, should it even be a board game?

Ultimately, it's a campaign game played over several scenarios. With each scenario offering its own experience. This would traditionally be done with hours of setup time, and more cards than a Hallmark factory. But here, it's done with an app. 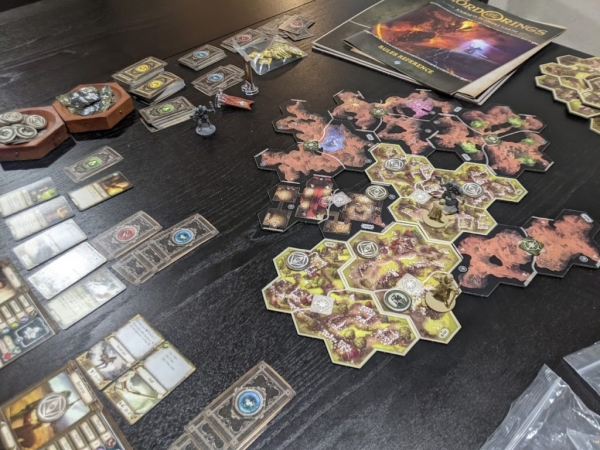 The app does a lot behind the scenes, from making the game flow smoothly, to taking the pain out of the setup. Be gone the hour-long setup of the original Mansions of Madness. Replaced with a couple of minutes of creating token banks and handing out character sheets. This is a fantastic and welcome change.

However, because of how the app is integrated it creates friction during gameplay. Instead of focusing solely on the board, your focus is split between screen and table. As there's no narration in the app, you'll be reading from the device, then moving your minis on the table. It can be irritating constantly flicking between the two.

Making it worse is the app stopping and starting gameplay whenever new map tiles are uncovered, or tokens are added to the board. Often you're doubling up the work the app has already done to make it physical.

This is why I question whether this would be a better experience if it was just an app.

Because even with this fancy technology, the designers have added additional busywork in shuffling your deck every turn. Something, an app could do in a second. 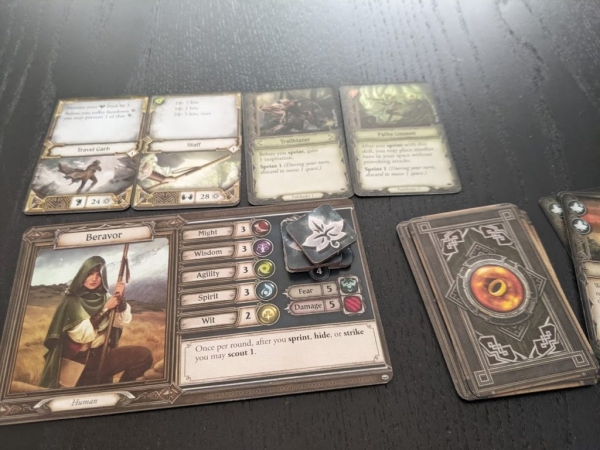 The Gap Between Theory and Reality

Outside of the app, Journeys in Middle-Earth differentiates itself from other dungeon crawlers by giving each player a deck of cards. Starting each turn, you'll be drawing two cards with the option of placing one in your prepared area, and the other on the top or bottom of your deck. Prepared cards can be used during your turn, while the rest of your deck will be used for tests.

A test is conducted by looking at the attribute on your character sheet and drawing that many cards from the deck. For instance, if I had a Might of 2 and it was a Might test, I'd draw 2 cards. Then I would count all the success symbols on these cards and that would be my result. However, there is another symbol called Inspiration. You can use Inspiration tokens you've accrued throughout your journey to change your Inspiration symbols into successes.

In theory, this card play tantalizes my grey matter. You only have four successes in your deck. Preparing one of these four might net me a great ability, but makes me weaker during these tests. Likewise, taking a card that doesn't have a symbol gives me an ability, and makes the chances of drawing a success more likely.

However, in reality, this decision felt inconsequential. At its best, there were times where you'd have the right cards prepared, Inspiration to spend, and choices about what to do. But a lot of my time was spent having no Inspiration tokens and prepared cards that weren't suited to the situation. Leaving me to suffer through whatever the game threw at me.

This was both frustrating and unfun.

So much of the gameplay hinges on these Inspiration tokens that it turns this sprawling dungeon crawler into an inspiration management simulator. 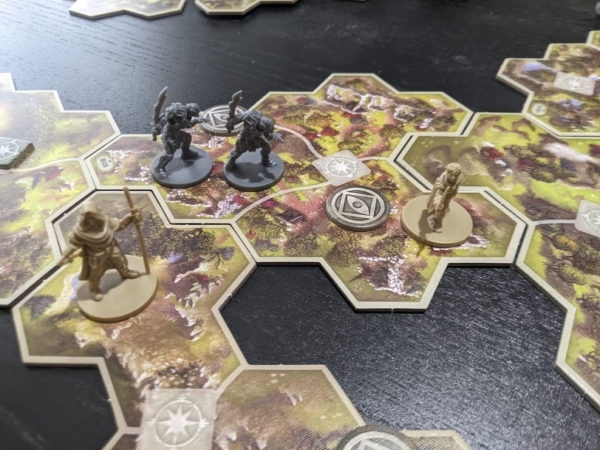 The inconsistency with the card play carried through to the rest of the game. Where in one scenario, I was constantly pressed for time. In the next, I finished it with not even a third of the timer (threat meter) being used.

Then there were enemies I easily killed in one action, other times my characters would swing two or three times without landing a hit. While another time still, the toughest monster appeared on top of my weakest member. This led to combat and the immediate death of one of my characters. Poor Bilbo.

This erratic gameplay makes it tough to gauge how you're going.

And it's not helped when you're missing information. In one mission deep in the campaign, I was working towards the objective when the threat meter passed a threshold. All of a sudden I failed the objective, and everything changed. I felt cheated. I didn't have any warning this was going to happen. Up until that point, the threat meter had been an annoyance, but this time it had some dire consequences. 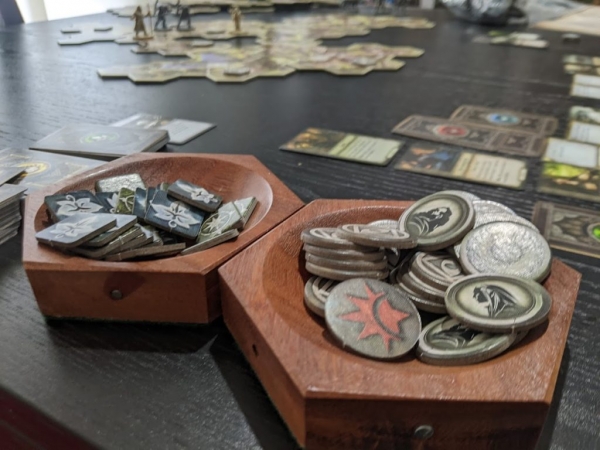 The story in Journeys in Middle-Earth was exceptionally well done, and even though I failed a couple of missions, and won a few others. The story never missed a beat, making it feel like it was telling my story rather than a pre-written piece. And while it wasn't as grandeur a masterpiece as Lord of the Rings, it hooked me enough to see through most of the campaign.

Otherwise, compared to other dungeon crawlers, Journeys in Middle-Earth feels restrictive both in play and levelling up after a mission. However, it is considerably easier to get to the table. So if you're looking for a game to quickly pull out and satisfy your cravings. This might be the one for you.

Although, if you're looking for a dungeon crawler that's less restricting and goes great with beer and pretzels, then look no further than Hellboy: The Board Game. Alternatively, Destinies is another app-driven narrative board game that's made BGG's Top 10 of 2021.

Thanks for reading. Find more reviews at Roll to Review, where I'm ranking all the games I review. Lord of the Rings Journeys in Middle-Earth currently ranks 60th out of 83 games.

December 30, 2021
Rating
3.0
Lord of the Rings Journeys in Middle Earth
A sometimes fun, sometimes frustrating romp through Middle-Earth. The story and writing carries the erratic gameplay. However, the low setup time and investment required to get the game up and running means that this game can quickly fulfill any dungeon crawling cravings you have.
D
DavidNorris Top 50 Reviewer 10 reviews