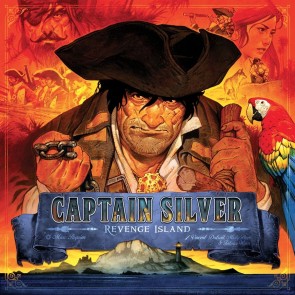 Treasure Island is one of 2018’s unsung gems buried, like so many other gaming gems, in the ongoing avalanche of releases. Its map-based gameplay that has players scrawling all over the board in felt-tip is a joyous recreation of childhood treasure hunting. But for the adult in us, it also has solid deduction and chase-based gameplay to enjoy. For all its pleasures, however, it is not entirely without problems.

Enter Captain Silver - Revenge Island, a full-box expansion that aims to fix the most obvious of those issues which is that it’s hard for the Long John Silver player, who hides the treasure and gives clues to the other, searching players, to win. It’s not a fatal flaw in the original which states in the rules that Long John needs to take on an aspect of the Game’s Master’s mantle, directing things so that everyone has fun. And that’s fine but hey, it’d be nice if he could be competitive at the same time, right?

Revenge Island’s solution to this is the introduction of Black Spot cards. These are special one-off powers the Long John player can use to boost his chances. They run a gamut of special effects that cover all aspects of play in the base game. The “Lie” card for example gives Long John an extra chance to give an incorrect clue to the players. Phantom, meanwhile allows you to escape with two miniatures, only one of which must reach the treasure for you to win.

Just as they represent a gamut of play styles, they also vary in power, indicated by a one or two skull rating on each card. These let you balance the game as you see fit: the rules suggest a single skull is enough to bring parity to the base game and that two or three gives greater advantages to Long John. In practice, we found two skulls were better, but it’s perhaps wiser to listen to the playtesters than a random reviewer who might not have figured out how to play Long John very well!

The Black Spot cards are great. However many skulls you give Long John it gives that player a greater chance to win while requiring almost zero extra rules weight and also increasing their strategic options and variety in the game. There’s no way we’ll be playing Treasure Island in the future without them.

However, they’re only one deck of cards, and to justify the full expansion box treatment, there’s more content inside. Hidden beneath the box insert is a better set of whiteboard markers which is a useful, if inessential, addition. You can also take the insert out of the expansion and replace the one in the base game box: the expansion one is lower, letting you fit all the new stuff into a single box. But the bulk of the box space is taken up with a new board. This has a more accessible projection of the sometimes confusing map from the original game on one side, and a whole new atoll, the titular Revenge Island, on the other.

There’s no doubt that the new projection is a small step up but the old one wasn’t a huge issue to begin with. The new map, though, feels entirely pointless. This isn’t a game where the geography of the island makes much impact on play. All the players are interested in is their position relative to the treasure: the scenery is there to provide landmarks against which Long John can offer clues. Changing the layout of the ground beneath your feet thus makes no real difference to the decisions or deductions you’re making.

A few special terrain rules just muddy the waters. Again they have minimal impact on play so they’re easy to forget in the excitement of scouring the sand for treasure. This makes Revenge Island something of a mixed bag, where you’re forced to pay full price for a big-box expansion in order to get a single useful deck of cards inside. Whether you feel that’s worthwhile depends on how much you like the base game, and Long John’s role in it, and whether you’ve found a hidden cache of pirate treasure to help you pay for it.

charlest replied the topic: #329606 10 Jan 2022 10:30
I don't think much of this expansion either. I didn't find the base game map too hard to read, and I actually don't mind Long John Silver being nearly impossible to win. I'm not sure if I will even use the new cards in future plays.

I do find the new map slightly interesting. The layout of impassable terrain means you have to take some alternate movement paths when heading in certain directions. This is minimal though in terms of overall impact so I get your point. The rules for what you can and cannot move through, however, are annoying.

I still think Treasure Island is an amazing game. It's been in and out of my top 50 games the past few years.

charlest wrote: I don't think much of this expansion either. I didn't find the base game map too hard to read, and I actually don't mind Long John Silver being nearly impossible to win. I'm not sure if I will even use the new cards in future plays.

I still think Treasure Island is an amazing game. It's been in and out of my top 50 games the past few years.

Treasure Island is in my top 75. It's such an unusual game, and I love the way that building up an actual map on the game board is part of the play. Talk about emergent theme,

But while it's fine to have Long John run the game, I don't quite get why you wouldn't take the opportunity to make him more competitive? Especially when it involves no extra rules and adds a bit of fun variety. I really like the Black Spot cards, to the point where I felt a bit bad giving the expansion 2*. But when so much of the contents are pretty pointless, I felt it was only fair.

charlest replied the topic: #329614 10 Jan 2022 12:07
Mostly because having an extra deck is slightly annoying, figuring out how much difficulty is appropriate would not always be easy (making it too easy for Long John Silver would be far worse than doing nothing IMO), and then remembering I have that ability and the timing of when to play it is a tiny bit of trouble.

It's just less elegant and less simple, even if it's not complex or much more weight. I've played with it twice and just felt ambivalent each time.
Read More...