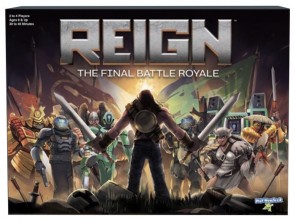 Game Name
Reign: The Final Battle Royale
Players
2 - 4
There Will Be Games

Look, I’m not going to sit here and tell you that Reign:  The Final Battle Royale by Play Monster is a great game. I’m not even going to suggest that you find one of the places selling this thing at sub-$20 price points because most of you reading this would come back to me and be like “Barnes, this game is garbage, why were you so positive about it.” In fact, I am going to specifically qualify this review by stating this: if you style yourself as a “board gamer” or part of the board gaming community in the modern Boardgamegeek.com sense or a “gaming hobbyist” then just don’t even read any further because frankly speaking there is practically nothing here for you. If you demand cleverness, balance, and a bunch of fancy mechanisms then this game is going to be your bane.

Alright, if you are still with me, hear me out on Reign.

I’ve recently realized that my favorite kind of games are simple and squishy, where the fun comes from playing and laughing rather than having the “fun” be proscribed by process and structure. I joke about particularly liking stupid games where dumb shit happens, but maybe that’s not so much a joke as a vision statement. Reign fits squarely into that vision. It’s an almost offensively stupid game that has virtually nothing to do with current trends in design and does virtually nothing to appease or appeal to hobbyists because in the world that this game exists in, that demographic is irrelevant.

Concept: Samurai, Barbarians, Super Soldiers, and Drones are on an island that is about to be hit by a couple of different catastrophes that will eventually destroy the whole thing section by section. Based on a small stack of cards that indicate which section of the board is under the gun and a timer that ticks down with each turn, you know what’s coming and if you’ve got a lot of pieces in that section, you have to try to get at least some of them out. Because when the timer goes off, the entire section of the board is removed and everything there dies horribly. The goal of the game is to have the last figure standing in the safe zone.

So these groups start on the outside perimeter of the island and everyone has to fight tooth and nail to get to that center safe zone, picking up Power Gems along the way. Each side has 12 figures with strengths ranging from 1-3. On a turn, you move one figure up to three spaces and if you land next to another player you can fight them. It’s a D6 roll off with +1, +2, or +3 per side based on the figures. You can also spend a Power Gem to roll a special power die to add to your combat value. So a lowly 1 strength figure has a shot at beating an elite 3-strength piece. Low roller loses their piece.

I was actually laughing out loud as I read the rules because this thing just totally flies in the face of so much of modern game design. The setup isn’t even balanced- everyone takes turns placing pieces so from the outset it’s all out of whack when you are squished in by a bunch of heavies. At least, unless you are careful. Otherwise, you might wind up with figures that have no chance of making it to the center. You might lose all your heavy hitters in the early scrimmage. You can find yourself unable to get any Power Gems because someone else has scooped them all up. The winner of the game isn’t even necessarily the player who did the best – in fact, the first game I played was won by the Super Soldiers’ very last figure who got a supremely lucky, no Power Gem victory against the last level 3 Barbarian in the center, who had pretty much slaughtered all comers for several turns. It was a shout out loud moment.

This all takes about 30 minutes, which is probably about all you want it to in all honesty. What’s surprising is that despite the spectacularly dopey concept and the fact that the game is really just kind of about mashing some wonderfully and refreshingly trashy toy soldiers together, there are just enough MEANINGFUL DECISIONS under the surface. There’s more game here then most anyone with a BGG user ID will likely let on. Being able to move only one figure three spaces each turn (plus extra if you spend a Power Gem) is tremendously limiting, and it means you’ve got to choose who moves carefully. Paying attention to where the stronger figures are matters. Deciding when to focus on saving your troops from imminent destruction and when to let them go is always a concern. There’s even some decision space in the setup – you can spread out or “invest” in certain sections, hoping that they’ll be scheduled for destruction later. And of course, you can always drop those heavies down in the middle of your opponent’s weaker units even if it’s just a flex and you never use them.

I’m not going to say that any of that really matters in the end but hey, maybe for a turn or two it’ll seem like you did something smart. Because it really is a game where you roll D6s to remove figures and that last Super Soldier can carry the day. This also means that rather than fussy mechanisms and rules, you’ve got nothing but raw drama. Narrative develops from that one 1-strength Drone that just wouldn’t die, the Barbarian that killed half of someone else’s army, as well as that Hail Mary Super Soldier. The stuff that childhood gaming legends are made of.

To be clear, this is a kids’ game, not really something for brow-furrowing adult board gamers who need to have their time playing with toys validated by a phony air of intellectual sophistication. That said, if it had come out in 1983, it would be the subject of much nostalgic rhapsodizing.  The DNA of Survive! Is in here for sure, but I kind of wonder if whoever designed this game (it’s uncredited) has ever even played it, let alone any board game made in this century. I also suspect that this could have been intended to be a design for a Fortnite or PUBG-inspired (or maybe even licensed) board game. Indeed, the gradually disappearing board here feels like it is more influenced by the maps in those video games rather than, say, Cosmic Frog or Hey That’s My Fish, two of the key games in the “disappearing board” genre.

The game really reminds me of other outlying, marginal, outside games like Viktory or Chaostle. Games that are coming from places other than the usual circles and winding up with something maybe a little rough but with plenty of heart and a wild sense of life that you don’t find in the workmanlike crap that trickles out on the regular. I love that it feels reckless, uncaring, and irresponsible. I love that it makes me feel reckless, uncaring, and irresponsible, that it causes me to drop all the pretense of games criticism and just have fun with it.

Most of my time in the hobby was from 1983 - 2007 without knowing anything about BGG or euro games (two of our most played AH games were Wizards Quest and Wrasslin’). I just gravitate toward big dumb fun and narrative. Since then, there’s been good advances in the types of games I really enjoy — but I always have a soft spot for these games.

We're on the outs MB, so I'm totally NOT buying this game DESPITE it sounding like ALL the FUN things. CAPS LOCK!

But if you wanted to mail me your copy before you eventually put it on a FS thread, I won't turn it down

Michael Barnes replied the topic: #330077 24 Jan 2022 19:05
I’m capricious my dude. Y’all know this. I genuinely enjoyed that stuff a year ago but now I’m going back to like pre-Settlers of Catan era games. What I want out of games right now is big stupid fun without commitment and without the stress of stretch goal FOMO and all this fucking cleverness all over the place. I want bratty, obnoxious kids games. Family stuff from the 70s and 80s.

I saw a copy of Chaostle at Half Price Books before Christmas with the expansion, I kind of wish I picked it up! That game was stupid as hell but it was cool and fun.