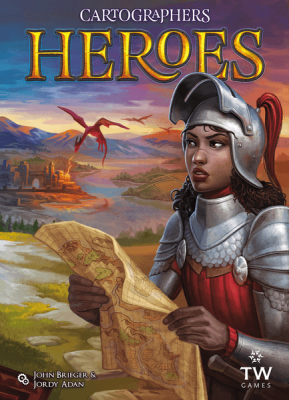 Now that the roll and write craze is running out of steam, it’s easy to look back and see how the very appeal of it was bound up by how easy these games were to learn, enjoy and discard. But there are a couple of titles that look like they might stand the test of time. Chief amongst them is Cartographers and, as if to prove its credentials, it’s back with a new edition, Cartographers: Heroes and a range of expansion maps.

Cartographers did two things that almost no other roll and write games managed at all. First, it had a degree of interaction. The core of the game is drawing shapes of landscape onto a gridding map to satisfy a random range of scoring conditions. But every so often this peaceful pursuit would be interrupted by an ambush card, where you’d pass your map to a neighbour and have them draw a negative polyomino in the most awkward space they could find. It wasn’t much, but it was a lot better than nothing.

Second, it evoked a theme well. The act of drawing symbols onto the map gave you the sense you were doing what it said on the box. And at the end, you were left with a physical record of your game that was worth looking back on, something that might even be of some use. You could imagine someone adapting those maps for a role-playing game campaign, for example.

All of this is retained in Cartographers: Heroes. Indeed while all the fun of the original is very much intact, the central criticism of this new game is that it doesn’t bring enough that’s new to the table. It’s fully compatible with the older game, and there are some imaginative new scoring cards to shuffle in. Banded Hills, for example, earns you points for complete rows with five or more terrain types, a fun challenge for a game that only has four common types. But for the most part, it’s the same-old, same-old, and likely to be of limited interest to owners of its predecessor.

The most noticeable difference is the addition of the titular Hero cards. They’re the nemesis of the monster ambushes of the original. You draw them onto your map as a single square but they project a pattern of influence on nearby squares that you draw in with tiny stars. Any monsters in those squares, or any that get added later, are removed. Although the concept is new, this doesn’t have much impact on gameplay. Placing heroes doesn’t require much thought, and is almost always about fitting them where they’ll get rid of the most monsters.

Far more impactful are the new monster ambush cards themselves. They’re the standout change in Cartographers: Heroes, which is ironic given the games’ title. Rather than the static patterns of the original, these new enemies are dynamic. Zombies spread if they’re not contained, while Gorgons and Trolls destroy adjacent squares, ruining your careful polyomino placement. Best of all are the Dragons which give you a reward of gold if you can surround or destroy them. Drawing them onto the most irritating places on your opponent’s maps is a whole new level of vindictive fun. 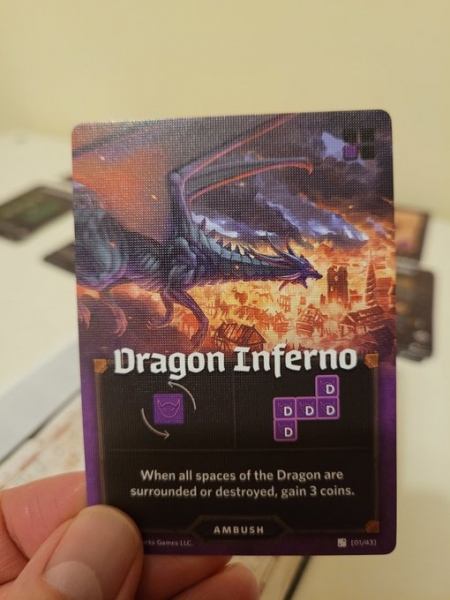 For some peculiar reason, Cartographers: Heroes doesn't retain the ruins of the original, although they're still on the map sheets in case you want to mix the two games together, which you can easily do. However, it's a slightly disappointing omission that feels like it's trying to give players a reason to own both.

So if you’re new to the series, Cartographers: Heroes is a great place to start. If not, you might find some of the new expansion maps to be a better way to enhance your game. These aren’t just extra map configurations - after all, you can make as many of those as you want with the excellent Cartographers Map Generator. Rather, these packs include new rules and cards along with a pad of maps that give the game a more significant twist.

Take the first map pack, for instance, Nebblis - Plane of Flame. In the midst of the map is a volcano, taking up four squares and there are three eruption cards you shuffle into the landscape deck. When drawn, rather than drawing terrain in the shape shown, you destroy that configuration of squares. These lava flows start in the volcano but can then continue on from a previous eruption, and one card offers gold if you wipe out a large area instead of a smaller one. It’s a fun addition, a minor twist to the base game concept, requiring you to juggle staying out of the way of potential lava versus maximising your scoring. 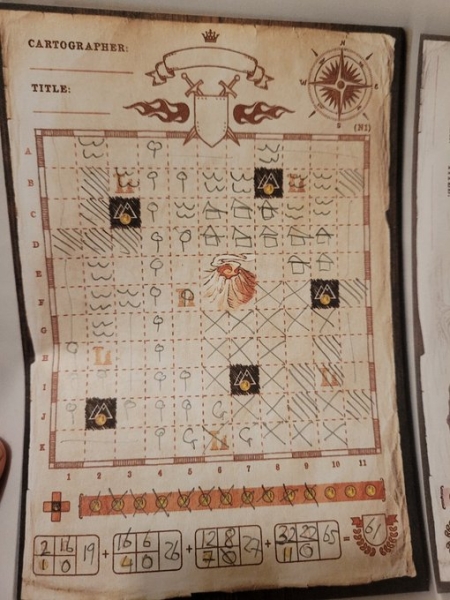 Map pack two, Affril - Plan of Knowledge, is the weakest of the three I’ve played. The concept is good: in place of a contiguous map, the squares are split between a number of islands. To continue mapping from one island to the next you have to spend a gold to make the connection. There are some new scoring cards to use in place of those originals that offer points for long chains of scenery. While this sounds fun in theory, in practice it’s very frustrating, shrinking the strategic space of the game. It also raises a number of rules and scoring questions that aren’t covered in the included sheet.

The concept of map partitions is better realised in the third pack, Undercity - Depths of Sabek. This also splits the map area but in a more straightforward, yet also more interesting way, dividing it into above and below ground. You can draw in either, following the normal rules, but you can only connect the two halves through a gateway square that joins them. This gives you more space to work with, reducing frustration, while leaving you with more interesting choices to make. It’s ably served by the added scoring cards that reward you for working in both spaces or plumbing the depths of the dungeon.

All these releases show that the core system of Cartographers is straining under the weight of its own popularity. But that doesn’t mean they should be ignored. On the contrary, this remains the best flip and write around, offering depth, theme and interaction with the genre’s trademark accessibility. If you’re going to go all-in on a small box game, there aren't many better candidates than this.