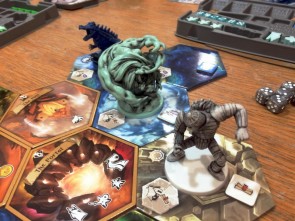 We were still trying to understand the special powers of the 8 elemental realms and how our dragon, wizard and warriors could take advantage of each and how we could impose our dominance over the other factions in this growing world. Each realm also had a giant monster that would wreak death and cause havoc amongst us, if we couldn't work out how to defeat it first or control it and steer it in our favour. We didn't have much time to build our Dwellings of Eldervale by Luke Laurie from Breaking Games.

It had been long in the making and highly anticipated by myself, as well as by a friend of mine, who had backed the game's crowdfunding campaign. Unfortunately, when it finally arrived, it was in the middle of the pandemic. So the giant box with the nine different plastic miniatures and the many cardboard tiles, decks of cards, dozens of different coloured dice and custom meeples sat quietly in a corner slowly gathering dust until eventually, we were able to meet in person again and get this epic worker placement, area control and engine building game to the table.

My friend had done their homework and learned the rules to teach the game to us. The setup took a while and was a bit fiddly with all the different elemental tiles to be sorted and shuffled, along with preparing each elemental's deck of cards and tokens. My friend did a great job explaining the game to us and once setup was finally complete, it didn't take long for us to take our first turns.

Given none of us had played the game before, we did have a few rules questions, which took a little while to answer, because the rulebook isn't necessarily very clear and even though everything is there, it's not always easy to find and the answer is sometimes hidden inside another section. However, most of the time, the answer to a rules question was pretty straightforward and after a few rounds, the game really started to flow quite quickly.

It didn't take us long to start plonking elemental monsters onto the map and engaging in fights. It was this part of the game that had attracted me to Dwellings of Eldervale in the first place. The idea that other factions can join a battle and that it's possible for a monster to rush into a battle made this game sound really exciting and different from other games I'd seen before. Yet, even though battles are implemented really neatly and cleanly, they're not actually as exciting as I had expected them to be.

It's nice to see that the losers get a consolation prize in the form of a sword for every unit that died and that ended up in the Underworld. Swords can be used in battles to improve your chances of winning, so the more battles you lose and the more swords you get, the stronger you potentially are in future battles. It's a lovely little catch-up mechanism and not really something I had seen before, but unfortunately, it doesn't really add any excitement to the battles in Dwellings of Eldervale.

Given the scope of the game, I expected Dwellings of Eldervale to give you many routes to victory and allow for many different and roughly equally successful strategies. Even though there are different ways to gain points in the game, the most points come from placing your dwellings, which makes sense, given the name of the game. That's a bit disappointing though, because it means there really is only one viable strategy: get your dwellings built in valuable locations and get them out before everyone else, then rush the end of the game.

That means it all comes down to how quickly and efficiently you can gather resources and convert them so that you can build those dwellings. It also means that luck plays a fairly large part in the game, because if you're lucky, you are able to claim the perfect dungeon card and add it to your tableau and switch your engine into the next higher gear. If you then also draw the perfect magic cards, you're going to be unstoppable.

It's really not what I had expected Dwellings of Eldervale to be. Maybe that's my mistake, but the game really seemed to promise great battles and the strategy and tactics that come with it. It seemed to be about area control and knocking people off the map, when in fact, you do recall your workers ever so often, so controlling area isn't really an important part of the game.

Player interaction is much more about buying the dungeon card another faction might need and joining battels and rolling the perfect dice to win the fight and take the glory points away from another player who will enjoy collecting their swords instead and then backstab you at the next opportunity.

The games I played all ended with relatively close scores, which adds to the feeling that your victory wasn't really earned, but more a matter of having been able to rush the victory at the right moment and having drawn the right cards and had the best dice luck throughout. It could easily have been another player who could have scored a couple more points and won instead.

I know, it all sounds rather bad and maybe that's because my anticipation was higher than what the game ever intended to deliver. So, sure, Dwellings of Eldervale is a fun game and I would enjoy playing it again, assuming someone else is happy to set it all up for me, because the setup does feel too time-consuming and fiddly. It also looks great on the table, with the strong colours of the realm tiles and the highly detailed plastic miniatures and custom wooden meeples. Yet, it's not a game that is at the top of my list of games I can't wait to play again.

Also, the choice of colours is a bit difficult if you are colourblind. I found it very hard to distinguish the two blues that are in the game. I appreciate that the game is trying to choose colours of the rainbow for the possible factions, but that makes it hard to distinguish them. Saying that, the different elements do also have different symbols. So you can work out which ones is which, but the symbols aren't hugely different, so it's not super easy either.

Overall, Dwellings of Eldervale just doesn't deliver what it seems to promise. It's not epic and even though it has a couple of interesting mechanisms, it just doesn't stand out for me. It seems a case where the publisher wanted to produce a high-quality game with all the bells and whistles, but didn't invest enough time on ensuring the gameplay is enthralling and exciting.

That's a real shame, because Breaking Games' previous game Rise of Tribes was fantastic and really delivered on its promise. In fact, you can see a lot of similarities between the two games and feel that one tried to improve on the other, but it just wasn't to be.

February 15, 2022
Rating
2.5
Dwellings of Eldervale
It seems a case where the publisher wanted to produce a high-quality game with all the bells and whistles, but didn't invest enough time on ensuring the gameplay is enthralling and exciting.
O
oliverkinne Top 50 Reviewer 47 reviews

Bixby replied the topic: #332605 27 Apr 2022 13:27
Interesting review.
I certainly have a different experience with DoE. I managed to get a Deluxe copy on the secondary market in February. Since then, I have played 9 times and find that there is a lot to love about the game. A few points:
- The rule book is very well laid out and quite comprehensive. We have been pleasantly surprised when we thought we had a weird edge case to find that the rulebook offered a quick and clear ruling for whatever it was we were pondering.

- Each of my 9 plays has felt very different with focuses varying from dwellings to card tableaus, to combat. I have played at various player counts: 2, 4, & 5.

- The setup is really not that fiddly, or we do not find it to be. Perhaps it is familiarity with the game, but the insert is fantastic and all of the components are extremely well organized. The decks required no setup at all as they are all stored ready to use. The only setup is to select the element tiles for the elements in use for that game and prep the play board with tiles making sure there is one monster lair in starting setup.

- The designer modules being added to the game really add interesting variations to game play too.

I realize that games are enjoyment of games are very subjective and that is one of the things I truly enjoy about this hobby. There is something for everyone's taste. I personally rate Tichu and Puerto Rico very low... not because they are bad games, but because they are not for me.

I felt this review deserved a counterpoint. I have played and rated well over 1000 different games. Only 6 of those rate as a 9 or higher for me, and Dwellings of Eldervale quickly climbed into that tier of games. This game has legs, and enduring ability to feel fresh when it hits the table, and is asked for by many in our play group. Just another viewpoint from a different perspective.

oliverkinne replied the topic: #333315 27 May 2022 02:56
It looks like people do have very different experiences with Dwellings of Eldervale - which I think is a good thing. Not every game will be for everyone. So thank you all for sharing your views.
Read More...