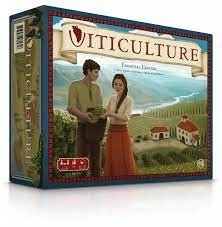 My experience with wine is pretty much limited to some ill-fated excursions in underage drinking with some fine, twist-top wines like T.J Swann. Along those lines of tragic adventures was my time browsing Facebook Board Game groups. However, one positive exchange that sticks in my mind was a post from someone explaining that they had an alcohol abuse problem (a.k.a. They spilled their wine on their copy of Viticulture) and that Jamey Stegmaier himself replied to the post and offered a replacement for the vino damaged parts. To paraphrase what Jamey said “We WANT you to kick back, relax and enjoy our games.” That, I thought, is just an extremely cool thing to do on the part of Mr. Stegmaier and, I also thought, "That is a company I'd like to support."

Viticulture: Essential Edition is worker placement and engine building, with an emphasis on the building (by the time you get your engine purring, the game is usually over). The Essential Edition moniker basically means Viticulture has gone through a number of editions and they have balanced the game/cards, added a Grande worker that allows you to go to a space already occupied by an opponent and tossed in some of the cooler things from the expansions. 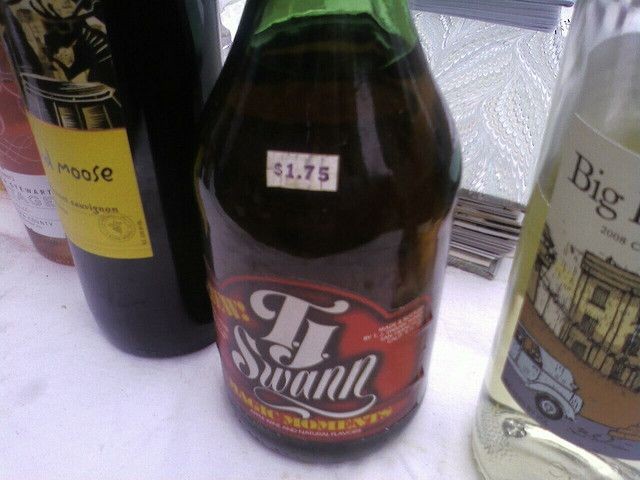 When you start the game, players will randomly be dealt a couple of the Mama and Papas cards. Besides being an obvious way to put the likeness of Kickstarter backers in game, it is the way the game varies your starting cards, lira and building upgrades. It gives the game a bit of asymmetrical lite action to the beginning. My tip is to take any building the game offers instead of the optional lira: it is one less worker you have to waste by going to the building space later in the game. 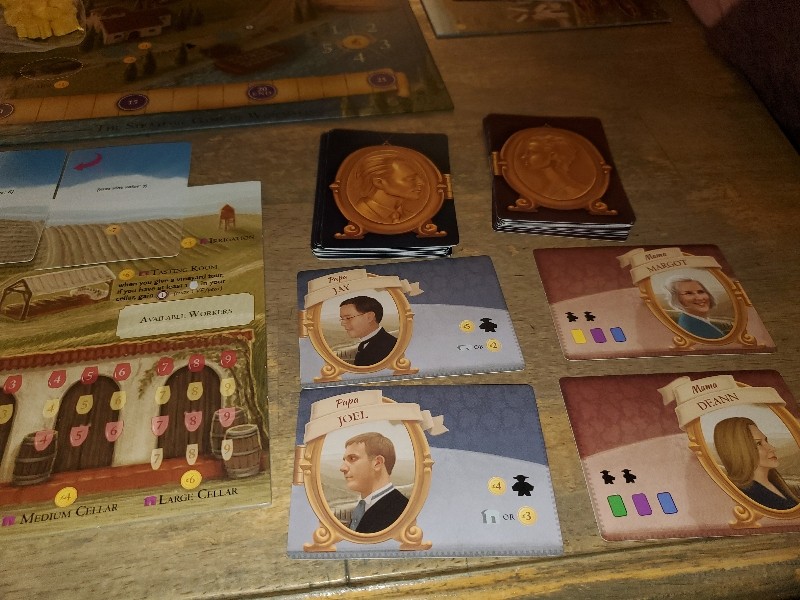 The first phase of the game is called “Wake Up”(Wake up! Grab a brush and put a little make-up). This is where the turn order is decided. Sure, it balances better rewards for going later in the round with lesser rewards for going earlier but the reason I really mention it is two-fold: This first reason was so I could put the System of a Down lyrics in this review and the second reason is that the Meeple that you use to make your turn order selection is a Rooster/Cock. Which leads to some great high brow humor at the beginning of every round when you ask “Where should I put my cock?” or when you lament the misplacement of the meeple and ask “Has anyone seen my cock?” 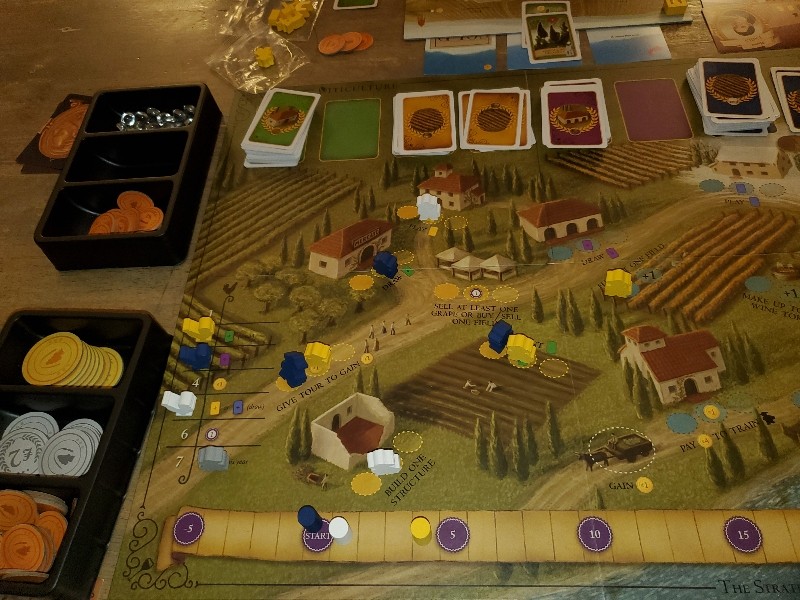 In plenty of reviews, you will see the phrase “It scales well.” In the case of Viticulture “It scales...well...” The game supports One to Six players and I have played it at everything from two to five players. The way the game expands the player count is adding player spaces to locations. Where there is one space for each location in a two-player game, there are two spaces in the three to four player game and three spaces in a five to six player game. Also factor in that the second added space provides a bonus for the first player to go there, usually allowing you to take the action twice (if you have the resources to do so) or giving you a discount or victory point. So, in a two-player game, competition for spaces is super tight, many times frustratingly so. When you jump to three players, then it becomes very open, with you rarely being blocked out (especially since you can use your single Grande worker to go to a space that is already occupied.) When you move up to four players, it becomes tight once more and, at five players, it opens up once again.

At first glance, it looks like the Wine Order cards are your goal cards. In reality, the Winter visitor and, to a smaller degree, the summer visitor cards, will be your goal cards, albeit in the shorter term. Pulling Wine Order cards during the first round for 6 Blush or 7 Sparkling Wines is a “Fuck Me” moment, knowing you are literally game “years” from having the Vines and Cellar upgrades needed to produce them. Other times, you will simply have bad luck pulling Vine cards and have all white or all red grapes to plant. Summer visitors generally give you a lira boost or discount (to get your engine started) and Winter Visitors will boost/shortcut later round actions (once your engine is ready to run). This is bit of a generalization because you'll find both types in either deck. There is a limit of 7 total cards that you can hold in your hand at the end of each round (This included Vine, Summer Visitor, Winter Visitor and Wine Order cards) but just take that as your sign that you should always have as many cards as possible in your hand. 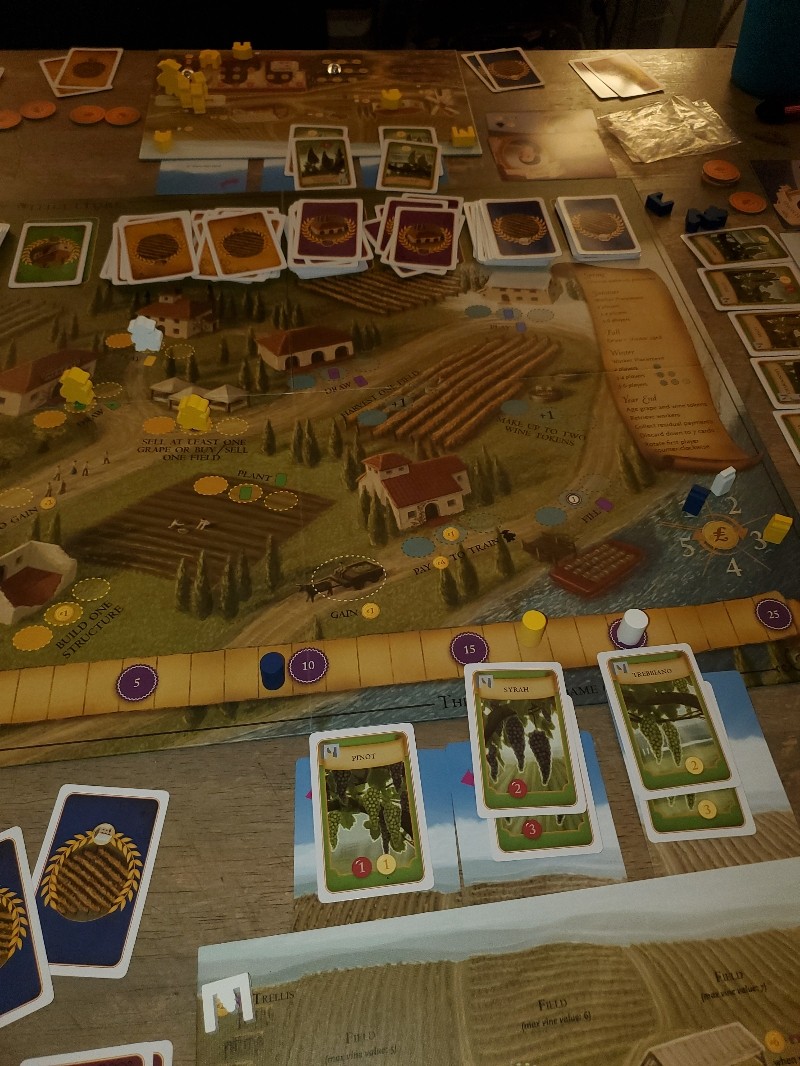 I won't go over all the spaces on the board (which let you draw a card, play a card, plant vines, make wine, etc...) but one stands out as the the go-to action on your first turn: Buy/Sell one field (of the three fields you own). It gives you an interest free “loan” of lira on something, quite frankly, you aren't going to be able to use the first few rounds of the game and lira is super sparse at the beginning of the game. If you are playing with the bonus spaces and are the first one to go to this space, It also earns you a Victory Point (both when you Sell the Field and, later, when you purchase it back). Feel free to try to talk me out of taking this action first every game but I'm convinced this is OP space during the opening round. 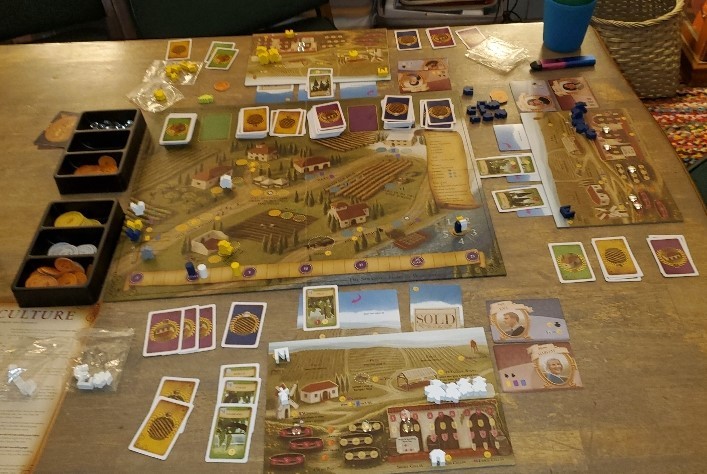 What I realized when playing this game for Review was that, when trying to decide if it was a “good” game, I had over a dozen plays, all which I thoroughly enjoyed. And that, win or lose, they all came with those bonus post-coital discussions (If only I would have drawn a different Wine Order card or If I could have gotten red grape vine cards earlier...) that mark a infectious game. Maybe the first move you want to make is a bit obvious but it also doesn't mean that player is going to win. Sure, the randomness of securing cards may have hindered your ability to produce Victory Points. But, as you talk to the other players, you realize it did the same to them as well.

I much prefer Viticulture at three or five players, as the openness makes it much more enjoyable. Despite living in Missouri, where you can't toss a grape without hitting a local winery, I can take or leave the Wine Making setting. But the theme is so “inoffensive”, I've found it an extremely easy sell to get to the table. If you can drink to that, Viticulture's bouquet is sure to appeal to you. (Disclaimer: It really just smells like cardboard and wooden pieces).

April 02, 2022
Rating
4.0
Viticulture: Essential Edition
What I realized when playing this game for Review was that, when trying to decide if it was a “good” game, I had over a dozen plays, all which I thoroughly enjoyed. And that, win or lose, they all came with those bonus post-coital discussions (If only I would have drawn a different Wine Order card or If I could have gotten red grape vine cards earlier...) that mark a infectious game. Maybe the first move you want to make is a bit obvious but it also doesn't mean that player is going to win. Sure, the randomness of securing cards may have hindered your ability to produce Victory Points. But, as you talk to the other players, you realize it did the same to them as well.

charlest wrote: Welcome back to reviewing, Wade. Good write up.

Second that. Good to have you back. (Now play some Unmatched so we can collaborate on an Unmatched vs Funkoverse piece.)

charlest wrote: Welcome back to reviewing, Wade. Good write up.

Second that. Good to have you back. (Now play some Unmatched so we can collaborate on an Unmatched vs Funkoverse piece.)

Thank you both! I'm hoping to ease back in to reviewing. We'll see how that goes.