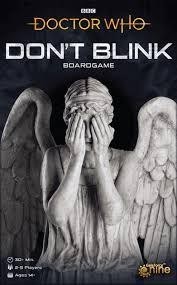 I was instantly delighted when I opened the package that Gale Force 9 sent me containing their two newest titles, Pathfinder: Level 20 and Doctor Who: Don’t Blink. I was immediately reminded of Fantasy Flight Games’ Silver Line, a series of $20-$30 titles that publisher did before they became an Asmodee thrall and started cranking out endless LCGs and a variety of cash cow licensed titles. Like the Silver Line games, these are inexpensive and have what many today would unfortunately consider spartan components- no miniatures (cardboard standees) and relatively minimal production across the board. There aren’t 35 scenarios for these games and expansions are pretty unlikely. 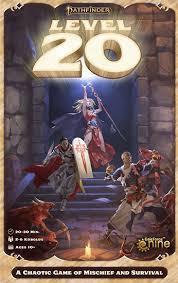 But what you get with both of these games are tightly focused, fun designs that don’t ask a lot from you other than to spend a couple of minutes learning to play. These designs, worked up by the folks at Lynnvander Studios, aren’t going to set the gaming world on fire and they are hardly innovative or progressive in any way but they are definitely solid and worthwhile. The secret ingredient is that both games have great concepts that make them easy to pitch to a group and get to the table. 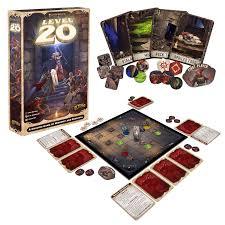 Pathfinder: Level 20 is the better of the two games and it is the first time we’ve seen a board game based on the popular 5E alternative. And rather than going for the routine RPG-on-a-board or dungeoncrawler route, they did something very different. The idea is that the players are Kobolds and a level 19 Fighter is heading down to their warren looking to get the last few XP needed to hit the titular level 20.  The Kobolds have to evade the fighter (who is, at this point in their career, completely capable of one-shotting them) while trying to embarrass and humilate the interloper enough so that they lose all their Pride and leave rather than suffer further indignity at the hands of these lowly critters.

I love this. It’s a little meta, it’s little silly, and it’s a unique take that will appeal to lots of folks. The gameplay is easy enough that anyone can dig in. Each Kobold gets two movement points and a couple of “Ferocity” tokens that give a boost when you need it. Everyone scurries around a grid-based board, rummaging through junk piles for treasure cards to inflict misery on the Fighter, who moves using a simple “move to the closest Kobold” automation scheme.  The trick is using the cards to thwart the fighter’s expected movement. You can leave spoiled food out to, well, you can figure out what that does to the hero. You can plant moss to cause them to slip and slide, hopefully into a wall. There are stalactites that can fall and create obstacles. And if you find yourself in a pinch, there are tunnel cards so you can make a quick escape. If only one Kobold is left standing, they win. But you can also win by “killstealing”, meaning that you were the Kobold that inflicted the final blow to the fighter’s pride.

There’s plenty of room for clever play, surprises, and laughs and it can get only very slightly thinky in terms of working out how to avoid the Fighter’s attention and position yourself to not get killed in the next turn.  This game went over extremely well with my kids’ RPG group, who have asked for it almost every session since I got it several weeks ago. It’s rated 2-4 players but I think it’s a fine solo game. Expect to spend 20-30 minutes with it, which is exactly where it needs to be time-wise.

The other title is another go at a Doctor Who game, which I’m on board for by default as I love the show and I would expect most folks interested in it will find this one fun to play. Don’t Blink has some very slight similarities to Level 20 but it is a somewhat more complex design that trades in the automated opposition for a human player taking control of the dreaded Weeping Angels. The remainder of the table represents the 11th Doctor (that’s the Matt Smith one) and his notable companions Amy Pond, Clara Oswald, and Rory.  They’ve got to round up repair parts across a modular board of 3x3 tiles to get the TARDIS spinning again before everyone is captured.

This game is all about bluff and secret action selection. There are eight Weeping Angels on the board, but only four (or fewer) can move each turn as selected on cards held by the angel player. The heroes move up to six spaces and facing matters, as is appropriate given the nature of Weeping Angels.

For the uninformed, Weeping Angels only move when you aren’t looking at them. When you see them, they seem to be immobile statues. Turn away, and they’ll get ya. So the heroes have a handful of “Blink?” cards including some special action cards specific to characters. Each hero gets one of these cards and when the angel player moves their selected Weeping Angels, if any move into the LOS of a hero then the hero reveals their “Blink?” card.  A “Don’t Blink” freezes the angel. The angels can also catch the attention of heroes looking away to force them to reveal their card.

So there is some tricky play here, especially when the heroes can do things like drag statues around on their move. The angels have a killer nine square move per activation so they can really get around the rooms. But the heroes can also pull off a neat stunt by using that drag move to position angels facing each other, causing them to remain immobile. The double bluff with the cardplay is dramatic and the special actions give it just a little more heft.

This is a 2-5 player game but with the way the cards work solo is off the table barring some kind of homebrew variant that I’m sure someone will cook up. It tends to run a little longer than Level 20, chiefly because there is more analysis in how to move effectively while also considering eight possible Weeping Angels moving on their turn, facing, LOS, determining which cards to put on which characters, and working out how to round up those Tardis bits. There’s a suggestion for timed turns, and although I usually don’t go for that I think here it’s a good idea – and it also adds some real-time urgency that elevates the gameplay.

Both of these games are smaller in scope than today’s average big-box blockbuster and with that comes smaller footprints, lower cost to entry, more modest production, and less of a sense that picking one of these up is some kind of life commitment. I am absolutely here for all of the above, I love these kinds of games and I’d love to see GF9 do more with this format. I’m frankly more excited these days by a pretty good $30 game than I am by a great $300 one, so these titles are really speaking to my sensibilities right now.

There are no user reviews for this listing.
Already have an account? Log in now or Create an account
Discuss this article
Log in to comment
Posts in discussion: GF9 Gives Off Silver Line Vibes- Pathfinder Level 20 and Doctor Who: Don’t Blink Reviews

Unbox Now is a new board game label aimed at helping friends and family choose the right board game to play together. The Unbox Now label will feature 11 best-selling Asmodee games, and games under this label have won over 140 awards. Unbox Now also introduces a Loyalty Program that rewards players with additional free content and online features like instructions, infographics and rulebooks.

"With thousands of products to choose from, it can be overwhelming for consumers who are new to board games to know just which game is right for them," said Andre Kieren, Head of Asmodee USA Distribution. "With Unbox Now, that question is an easy one to answer: you know that when you choose an Unbox Now board game it will be the best the industry has to offer, easy to learn and play, and enjoyable for all ages.” 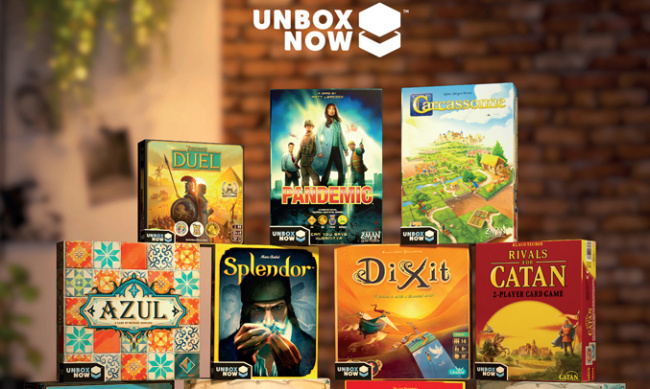 It's just so much different than those others, and only really acessible to people that have played Seven wonders First. Why not put Seven Wonders in that group?

Smeagol wrote: Is Seven Wonders :Duel a bit out of place in that photo?

It's just so much different than those others, and only really acessible to people that have played Seven wonders First. Why not put Seven Wonders in that group?

My wife and I only play Seven Wonders: Duel. She's never played SW, and I only did once (hating it). We both dig SW:D.

Cranberries replied the topic: #332892 07 May 2022 21:23
I was reading some Firefox homepage/Pocket clickbait article on how globalization and cheap stuff may be going away, and wondering if how that will affect the material production of boardgames, especially if publishers move to local production. I know nothing, but would hazard a guess that we'll get expensive games with high production values from time to time but see more of this small box stuff, and in my dream apocalyptic gaming future, more historically rich small games like 1st edition Pax Pamir or other games of that ilk. I realize I keep saying this in different threads, repeatedly, but only because I'm starting to believe that language is an advanced form of magic that can alter reality. Small good games. Small good games.
Read More...