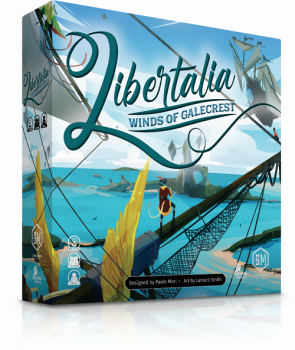 In previous reviews of Stonemaier games, I've mentioned their passing resemblance to a company known as Working Designs. Working Designs was a Video game publisher who specialized in localization of games and in creating deluxe (and collectible) versions of those games. Later in their life cycle, WD began tweaking those games (with the blessing of the original creators) to provide a better gaming experience. Of course, this came with the praises of some gamers and the spewing of bile by others who claimed the original vision was compromised. I hope Stonemaier is ready for the same type of reaction to Libertalia: Winds of Galecrest (Despite them having Libertalia creator Paolo Mori collaborating for all of the changes). At risk of spoiling my thoughts on the modifications implemented in this release, I think Winds of Galecrest has been taken from a borderline great game and evolved it into one that firmly resides in the “Cutthroat Classic” category.

The most obvious change is the artwork by Lamaro Smith. I mean, come on, when you think of Libertalia, there is only one piece of art that you instantly think of...and that is the cover of Merchants and Marauders. 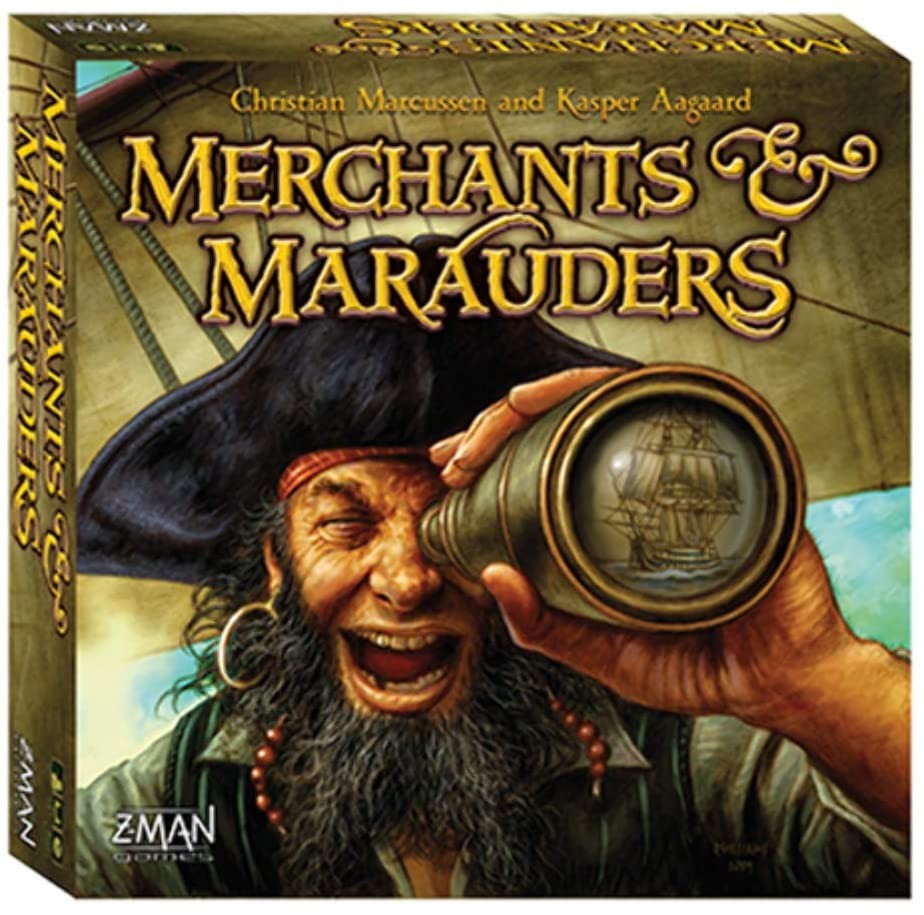 Okay, maybe it is just me. I have no idea why but I always picture M&M's boxart when I think of Libertalia. Take from that what you will but I think it means that the majority of base boardgame pirate artwork is pretty interchangeable. Not so with Winds of Galecrest. It has a pastel, breezy feel and the character design is based on anthropomorphic animals. When my daughter pulled the Scout card, she said “Awww, look at him! He's such a pure soul!” 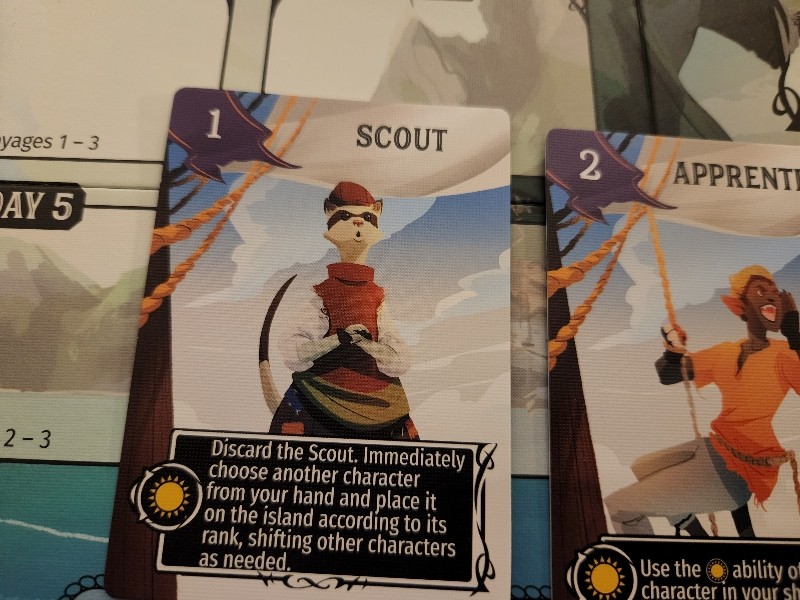 I don't think ANY character from the original Libertalia could be called a “Pure Soul” based on the artwork. Probably the best way to describe the original Libertalia character cards was “Screen capped from a Live Action Sega CD game.” Now with a whopping 40 character cards in each deck, the artwork/animal aspect really helps to define them as individuals. The Mutineer is a slimy, backstabbing Lizard, the Surgeon is a Kangaroo Doctor, and the Gambler is a sneaky raccoon. 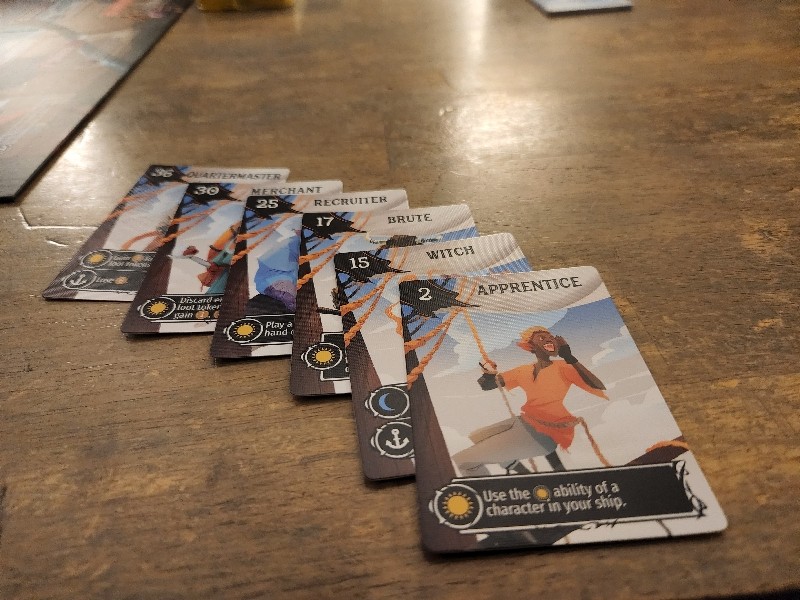 The game's core is still (mostly) the same. At the beginning of a voyage all players gain the same six character cards from their individual decks. Players then evaluate the loot tokens for the day (and the following days for this specific voyage) and choose which card they wish to play. Card powers and rank will have a great influence on when you play them but a good sum of the challenge is predicting what your opponents will play. After daytime powers are activated (which can change the order of the cards), the highest ranking card gets first dibs on the loot tokens (and dusk powers will activate which will, again, impact player order and loot snatching). This is when you cue the pirate theme, because this generally leads to at least a few players at the table cussing like a sailor. 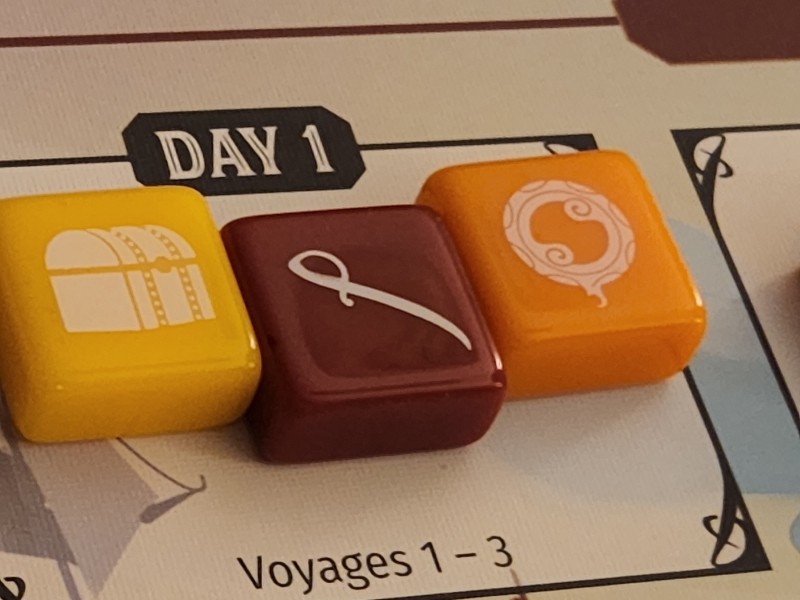 The Reputation track is pure genius. It removes the baseless tiebreaker mechanism from the original game and hinges it on actions you have actually taken in-game. The visual representation means a single glance can tell you where you will fare on any ties that might occur and you constantly want to have the highest reputation for tie-breakers...except at the beginning of each voyage when you awarded the starting gold for a voyage and scum of the earth are awarded more gold than the opponents that are standing on higher moral ground. This adds an additional layer of tactics in regards to the timing of playing cards that move you up or down the reputation track. Have fun mentally juggling if having a higher reputation will compensate for the additional doubloons your competitors will be getting at the start of each voyage. 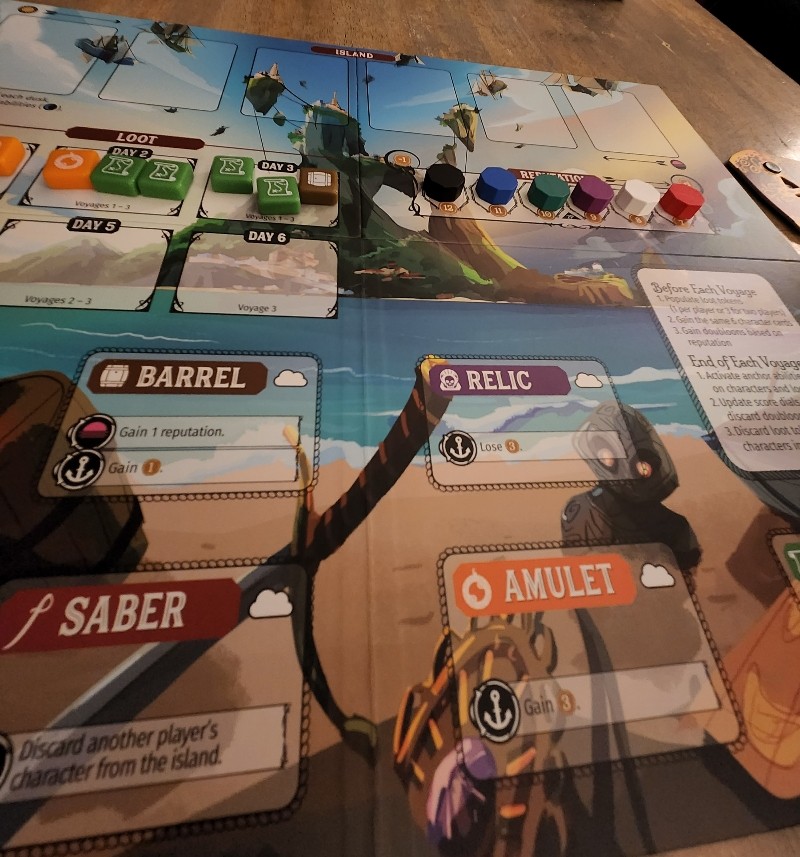 After each Voyage is completed (which consists of four days in the first voyage, five in the second and six days in the third), Players will weigh anchor (thus activating an Anchor abilities of any characters on your ship), total up their total doubloons and “Bury” them by adding that amount to the included Treasure Chest counter. Those Buried/Banked doubloons become untouchable, all characters aboard your ship are discarded into the “Graveyard” (unless you have a card that says otherwise...You know what, just add the sentence Unless a card says otherwise to everything in this review, it pretty much fits.) and a new voyage begins and starting doubloons are handed out according to the reputation track.

If you were doing the math, you might have realized that players started with a hand of six cards but only used (probably) four of them during the first voyage. This adds another devious wrinkle to the game as unplayed character cards carry over from one voyage to the next. A super strong card that might butt heads to your disadvantage can be held to be played on a later voyage...and everyone else might be thinking that too.

Libertalia: Winds of Galecrest comes with a two-sided board: The calm side and the stormy side. The loot spaces on the calm side are less “In your face” with the other players and the stormy side puts you cutlass to cutlass with all the other players. And while that could have been more than enough options for players, it goes above and beyond by adding two-sided loot tiles for every space that allow you to customize your game with the stormy/calm selection that you like best. 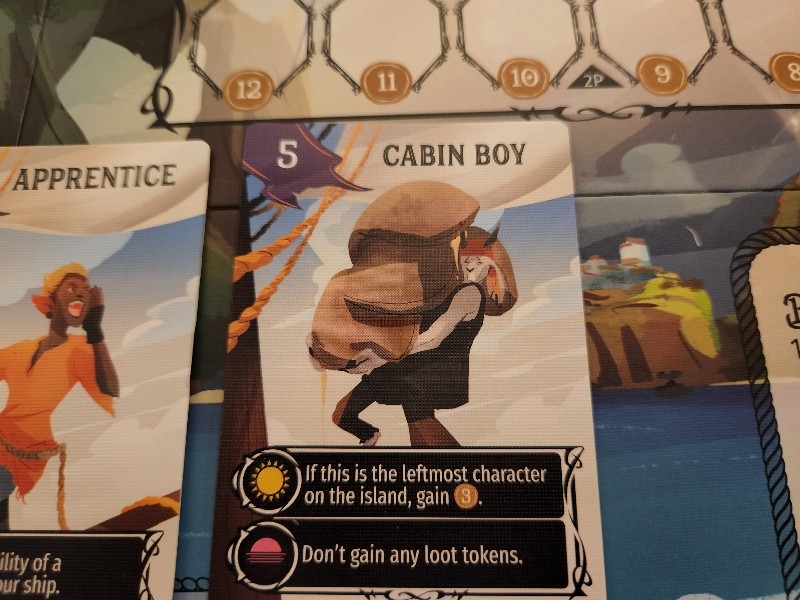 Libertalia supports one to six players. If you are cringing at the thought of a six-player game, worry not. This game is so slick and quick, six players is a regular ocean breeze. And this game thrives on more players, with four to six being it's sweet spot. There are specialty rules (and an additional tile) for a two-player version that, while not close to being the optimal way to play, still gives a satisfying version of the game.

What is obvious with Libertalia: Winds of Galecrest is that Paolo Mori has spent the last 10 years since it's initial release simmering dozens of changes inside his mind...and not in a knee-jerk updating of the rules to any complaints but with thoroughly tested tweaks and twists. The result is a rapier of a game: lightweight, very sharp and it thrusts you into the role of a savvy pirate.

April 13, 2022
Rating
5.0
Libertalia: Winds of Galecrest
The result is a rapier of a game: lightweight, very sharp and it thrusts you into the role of a savvy pirate.
W
WadeMonnig Top 10 Reviewer 195 reviews

There are no user reviews for this listing.
Already have an account? Log in now or Create an account
Discuss this article
Log in to comment
Posts in discussion: Sky Pirates-Whatever happened to “We Raid, We Pillage?”- A Libertalia: Winds of Galecrest Review

thegiantbrain replied the topic: #332522 24 Apr 2022 07:19
Thanks for the review. Really tempted by this one as I regularly accommodate a large number of players.

WadeMonnig replied the topic: #332531 24 Apr 2022 20:06
Probably goes without saying but it works best with at least one person who has played before and knows the cards. I generally narrate the rounds, but once everyone has the general idea, it goes super quick.

Michael Barnes replied the topic: #332536 25 Apr 2022 03:02
I think I’m gonna get this, I liked the original from playing on BGA but it is one of those “almost but not quite” games. This looks like it may bring it home. Love the new art, far better than the silly ass Pirates of the Caribbean junk.

Paolo Mori is quite an underrated designer IMO.

Michael Barnes wrote: I think I’m gonna get this, I liked the original from playing on BGA.

I was tempted to explore how this game almost screams "This would be so great as an app with daytime/dusk powers run behind the scene!" But I think it would lose as much as it gains without the tabletop banter and reading other players in person.
Read More...