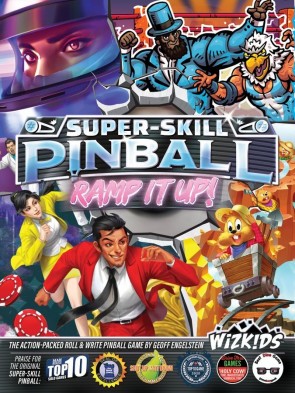 Growing up by the English seaside, the promenade was thronged with video game arcades. Penny falls, one-armed bandits, all the bright and tacky lures of the British at their merrymaking. There were also coin-op video games on which I spent my ten pence pieces. But there were no pinball tables. I didn’t discover that delight until years later, playing The Addams Family or Star Trek in dingy student bars. I was never any good at them, but there was something about their size, their mechanics, the luck of physics, that made them addictive.

Plenty of coin-op video games have gotten the tabletop treatment down the years, for better or worse, mostly the former with quick merchandise tie-ins to fool credulous kids. Pinball, though, is a harder ask. At least it seemed to be until Super Skill Pinball: 4-Cade hit the shelves. Although my curiosity was piqued right away, awakened by the memory of those dingy student bars, I didn’t manage to catch it until this sequel, Super Skill Pinball: Ramp It Up, which uses the same base mechanics for four new tables.

When you open up a roll and write game, what you’re expecting is a thick pad of scoresheets. Inside Super Skill Pinball: Ramp It Up, by contrast, what you get is a thick wad of shiny, wipe-clean cardboard. There are four tables, each of which has two halves, the main playfield and a backglass, and there’s enough for four players to play simultaneously. Even given that the sheets are double-sided, that’s still a lot of cardboard.

There’s a quick start sheet too, so I grab that, the two halves of the first table, Gopher Gold, and one of the included dry-wipe markers. At first glance, I don’t care much for the garish cartoon art but once assembled, and the neat silver-effect pinball marker placed on the on-ramp, I’ve got to admit it very much looks the part. Like a real pinball table. This thought, in various manifestations, is going to recur frequently over my first few plays.

Play in Super Skill Pinball: Ramp It Up starts at the top of the table and then, each turn, drops down a level on the table based on your choice of one of two rolled dice. Depending on what numbers come up you can hit targets, sets of which earn a bonus like multiball, or perhaps a bumper which you can go round and round so long as you keep rolling the right chain of numbers, scoring a point each time. At the bottom of the table are the flippers which can launch you to the top of the table again, but each time you hit them, you cross off the corresponding number. If you can’t cross off a number, you lose the ball.

My first play of Gopher Gold involves getting a feel for the table. And that takes a while: each set of targets has a different bonus and the backglass has another flipper that can loop the ball or send it down a target cascade. But it doesn’t take long before I’m invested in this slip of wipe-clean cardboard as an actual pinball table. Especially when I get two of those cool fake-silver balls to bounce around at once in a realistically brief multiball. By ball two I’m beginning to get a sense that the order in which I do things has a definite impact on my overall score, and that good play isn’t just about picking the highest scoring number on each roll. There’s luck, sure, but there are also some interesting probabilities to play.

By ball three I’m looking forward to another game to try and improve my paltry score. I’m also feeling confident enough to try something I’ve never dared do on an actual pinball table which is tilt. This allows you to modify a dice score but beware: the more you change it, the more likely your next roll is to lead to the table shutting down for this ball. My risk pays off and the next few drops to the flippers are heart-in-mouth time as I hope I get a roll that will allow me to keep playing. Fate isn’t kind, and I bank an average, unspectacular score.

Another play reveals that Super Skill Pinball: Ramp It Up certainly has the right mix of super skill and super luck. Having got a handle on the table mechanics I’m able to double my score from the last round simply by making choices in what feels like a strategically sensible order. At the same time, the restriction to only two numbers per turn has an odd sense of paradox. On the one hand, it keeps me on my toes by restricting my options, meaning that I’m constantly having to reevaluate my game plan. On the other, that restriction feels like it gives the game a cramped decision space, making the choice less interesting.

Armed with my new understanding, I move on to the next table, High Roller Heist. And as soon as I do so, it feels like I’m hitting the bumpers myself. While the basic mechanics are the same, the table is totally different, with its own new five full pages of rules. The target sets do different things but the backglass is completely new. There are three areas and a security guard who moves between them and will “jail” your ball if it’s in the same area. Each area has its own scoring rules from a set of drop targets, to a dice-based code break, to a pyramid of increasing rewards.

Right away it’s clear this table is a lot more thinky than Gopher Gold. You have to try and break into the backglass while getting the timing right to avoid the guard while having the best bonuses. However, the extra rules and the extra strategy also make it a lot slower. Like a lot of board games based on twitch skill activities, there’s a strange disconnect between how well it evokes the sense of that activity and how well it evokes the feel of that activity. While dice make great arbiters for the whims of physics, no pinball table will pause and wait while I plan my next move.

The next table, Pin Pals, takes this disconnect to a whole new level by introducing the concept of co-op play in the guise of a wrestling match. And as I fetch my eldest daughter down to try it out, I find myself torn. On one hand, this is a brilliant innovation, leveraging the power of tabletop to do something totally new and fresh. On the other hand, it’s obviously not pinball. And it’s also even slower than Gopher Gold as we have to stop from time to time and plot strategy together, only to cheer or groan as the dice punt us around the table from target to bumper.

The final table is Top Speed and it’s the best of the lot, provided you can cope with another five pages of dedicated rules. Top speed has boxes you can cross off for rolls of 7-9 on a six-sided dice because it also has a “speed” bonus you add to your dice rolls. Trying to control this to make use of those extra boxes is a circular strategic nightmare as you need to hit speed control features at the right time. After playing this, it feels like it has the best balance of bringing dazzling new ideas to the table while still remaining fast and relatively accessible.

Having earned its way into my small pile of other roll and write games that proved worth keeping - and it is a pretty small pile, all told - I have mixed feelings about Super Skill Pinball: Ramp It Up. Its evocation of pinball in a wholly different medium is uncanny, and it’s certainly fun to play. But the overhead of learning and managing each table drags it down. Despite the inclusion of Pin Pals, it doesn’t feel like a game I can imagine teaching and playing often with other people. And that’s a shame because it’s so full of fresh, intriguing ideas. But then again, remembering how I stood alone, flicking the flippers in those smokey student bars, perhaps that’s Super Skill Pinball’s ultimate thematic triumph.

April 18, 2022
Rating
3.0
Super Skill Pinball: Ramp It Up
A clever concept that brings pinball to life on your tabletop, with lots of variety in one box, provided you can learn the rules and ride the rolls at a relatively slow strategic pace.
MT
Matt Thrower #1 Reviewer 286 reviews

WadeMonnig replied the topic: #332415 19 Apr 2022 18:52
"While dice make great arbiters for the whims of physics, no pinball table will pause and wait while I plan my next move."
*bumps the table as the ball rolls down the left flipper, holds down the right flipper as the ball settles to a stop in the angle of the right flipper* Pause Mode