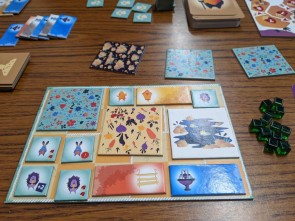 I recently conducted an interview with Ellie Dix and I wanted to dive into her designs wearing my critics hat (well swim hat I guess if we are going to continue the metaphor). As I mentioned in the interview, Ellie was kind enough to send me a Buzzlebox for review back in 2020, and with one thing and another I have only recently had the chance to properly give the games inside a good shake.

The Buzzle Box is a collection of puzzles and games, all of which have been designed by Ellie, put out under her imprint The Dark Imp, and with a particular theme. The one I was sent was around the theme of gardens and poultry and contained two games, the larger of which is Gnome Grown. The other game is called Count your Chickens and I'll get around to that one.

In Gnome Grown you’ll be constructing a beautiful garden, building features and attracting animals to fulfil objectives. Over all of this stands the Gnome and they want paid. In Ladybirds. 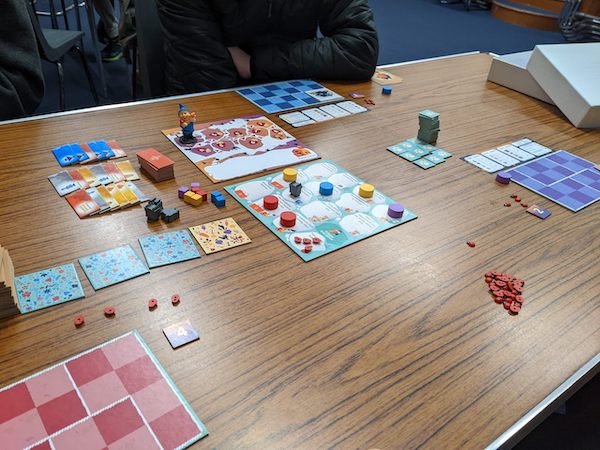 Game setup and ready to play

The game itself is simple enough. Bit of worker placement to get tiles, place tiles, and score objectives. Everyone’s garden grid looks the same, so all the successes and mistakes are going to be your very own.

A veg patch here, statue there, a hedgehog under the statue and suddenly you have an objective fulfilled. You know the usual garden layout. The wrinkle here is that your garden is split up into odd shapes and an objective can only be scored if all the requirements are inside one of these shapes. In a lot of this style of game you get a bunch of polyomino shaped pieces to puzzle on how to fit into a regular shape. Gnome Grown turns that on its head with regular shapes overlapping and fighting for space in your odd patches of garden. 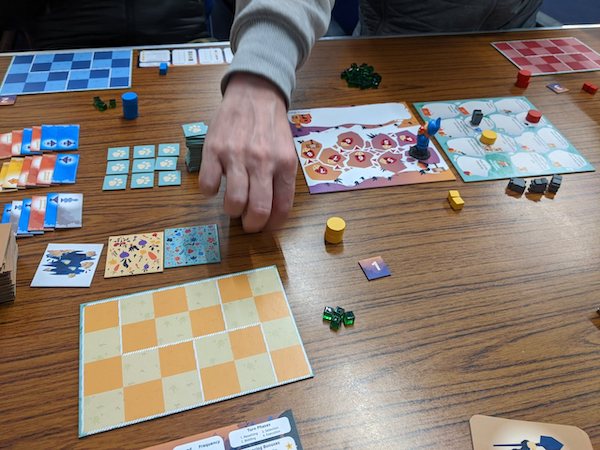 See this area here is small, so maybe I can only score one objective in it. This one is large so can it fit two or more? It’s a compelling puzzle with lots of opportunity for clever placement or calamitous mistakes. The regular tiles can straddle several zones giving you lots of opportunity to turn a single move into a bonanza of points as you bring a bunch of objectives to completion all at once.

The worker placement is relatively straightforward, with plenty of opportunity for one upping another player, blocking a move, and frustrating plans. Cheap or free spaces go first, and as the board fills the payment to the Gnome becomes ever more common. A little bribe mechanic allowing you to occupy the same space as another player adds a little spice to the deal and keeps the gnome rolling in ladybirds.

The gnome looks at you from atop the garden. Their steely eyed stare, making you count every ladybird, and pay the tithe you owe. ‘Pay the Gnome’ became a catchphrase as we played. This ceramic monarch trapse along the turn tracker, stomping towards the end game with gritted teeth. As they see the end in sight, their greed grows, their demands ever more unreasonable. A clever player can sate the gnome's desire for ladybirds, whilst skimming off the top of the gnome’s stash. 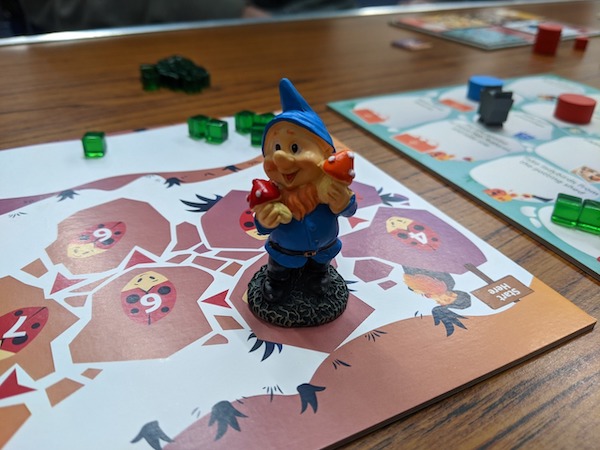 Don't believe his jovial countenance. There is a hard capitalist heart in there.

The ladybirds not only are used to pay for spaces on the worker placement side of the game, but also to jostle for position at the start of the round. Here Gnome Grown shows off an excellent trick, which was certainly the first time I had seen this mechanism. Each player has a token showing their position in the round from 1st to 4th. Now going last in a worker placement game is generally not great, but it can give you momentum for the next round. Gnome Grown does this by assigning a value in ladybirds to each token from 1 to 4. At the start of each round, apart from the first, you will bid for position and the person in last starts with 4 ladybirds towards that bid, the person in first only 1. Simple, neat, and effective. My favourite kind of design. 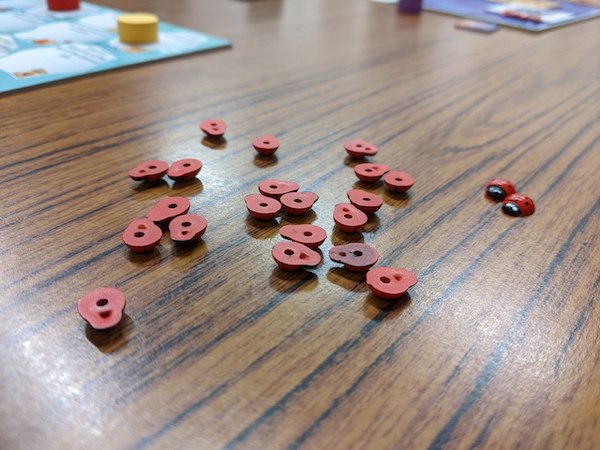 So hard to pick up

We can’t shut the gate on this particular garden without talking a little about production. The Dark Imp, is a small imprint and not printing games in the thousands. That does show a little in the quality of some of the components, but not nearly as much as you might expect from a small outfit. The card stock for the game is decent and thick, though the finish is a little glossy for my own tastes. The tiles are nice and thick, and easy to pick up and move around. All the worker tokens are easy to handle. That leaves only the ladybirds. These are absolutely minute and really difficult to pick up. We ended up putting them upside down on the board, making me feel like I was paying for goods in insect carcasses. I did replace them with other tokens after our first game.

Gnome Grown is a pacey, well thought out game with more depth than it first appears. It encourages you to play in its garden, to manipulate systems, and end up with a beautiful, well managed garden. Of course you might end up with a hastily thrown together nightmare. It feels great to play, and very satisfying. Just don’t forget to ‘Pay the Gnome’.