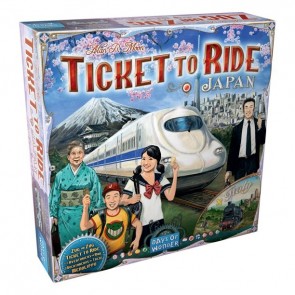 Bullet Trains have always been kind of mythical to me. Despite growing up in a town in the U.S. named Pacific (who changed it's name from Franklin to Pacific to kiss Union/Pacific Railroad ass back in the day) and watching at least a dozen fright trains trundle through town on a daily basis, the closest thing to a bullet train I experienced was the occasional Amtrak trundling through town at a slightly faster clip. Sure, the Amtrak was almost always greeted with a sense of joy...but only because it was only four or five cars long and you knew you weren't going to be stuck waiting at the crossing for ten minutes. But, mass transit moving at 150mph? That was a mythical beast from the east. So, the bullet trains included for the Japan map in the TTR Map Collection Volume 7 is what made me want this release.

First and Foremost, you only use 20 trains of your color on the Japan map. This is very important as things get really wild, really fast if you don't (see also: I always get one rule wrong: Patent Pending). While that number may seem extremely limiting, it goes hand and hand with the Bullet Trains.

The Bullet Train mechanism for the Japan involves players claiming the grey Bullet Train routes by spending the required number of cards. The twist is that instead of filling the route with your trains, you place a single bullet train on that route and it can be used to reach destinations by ANY player. What you get for your expendtiure is points on the Bullet Train scoring track. (Alas, we might have stumbled upon why the United States has never had bullet trains: the accumulation of mystical points and a system that can be used by all just doesn't appeal to our capitalistic greed.) If you happen to use up all of the Bullet Trains, the remaining BT Routes can be claimed like normal grey tracks by any player and only be used by them to reach those destination. Once the endgame is triggered (by a player having 2 or less trains remaining AND there being two or less Bullet Trains remaining), Players are awarded points for how much they helped to develop the Bullet Train network and negative points are accessed if you are in last place OR even more negative points if you did not assist in the network at all.) It's an intriguing system and mostly works as intended. However, especially in a two-player game, it can be “gamed” with one player simply not assisting in Bullet Train network at all (-20pts) or just claiming a single spot (I'm looking at you Osaka to Kyoto) to avoid the bigger “No Assistance” penalty (-10pts). I wouldn't say it ruins the map for two-players but it certainly sucks the enjoyment factor down if someone wakes up and chooses violence. 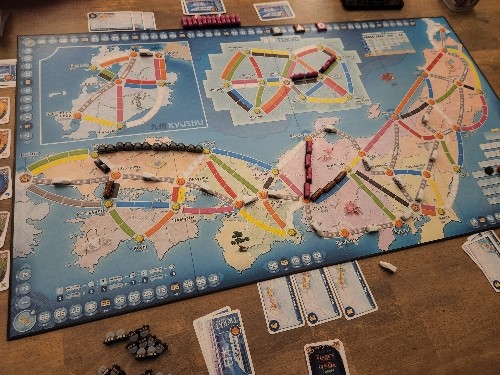 I should also note that the map includes “Exploded/Zoom” of the Tokyo and Kyushu Subway systems. This is more of a concession to not having a really weird looking map but may take some explaining to players who have not seen this is a TTR map before.Overall, I really enjoy the Japan map. The “co-op” feel of the Bullet Trains is a fresh addition to the TTR world. But it feels a little more “breakable” if you play a more cutthroat style. 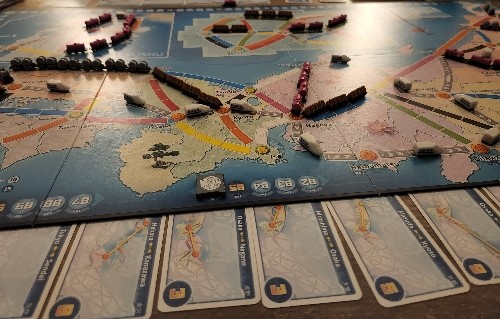 On the (literal) flip-side of Japan is the Italy map. Italy adds the Ferry mechanism to the standard TTR gameplay. You will find Ferry Spaces/Routes on the board that can only be claimed with either the small deck of Ferry Cards that are included (One can be drawn per turn, much like taking a single Locomotive card except they are always available. These cards count as two ferry spaces and can be combined with Locomotive cards to fulfill the required Ferry Icons while the rest of the grey spaces in the Ferry route are filled like normal grey routes in game. I, personally, love the Ferry routes because they are usually five to seven spaces long, so they drop serious points onto the board when you purchase them. Of course, drawing a Ferry Card does telegraph to the rest of the table that you plan on claiming a Ferry Route in the near future...or does it? 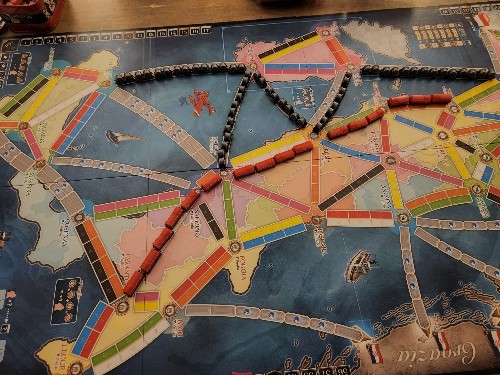 More importantly, Italy adds a regional scoring mechanism to the end game. The map of Italy is divided into 17 regions and players earn points for connecting those regions. This can impact final scoring in a significant way. So much so that, when end game approaches, instead of drawing more destination cards (and risking being saddled with negative points), it is a viable strategy to gamble on simply connecting additional regions to your network. It's a classic risk versus reward scenario where you try to balance what points you get from playing trains PLUS the additional region bonus while also pushing the game toward it's conclusion. 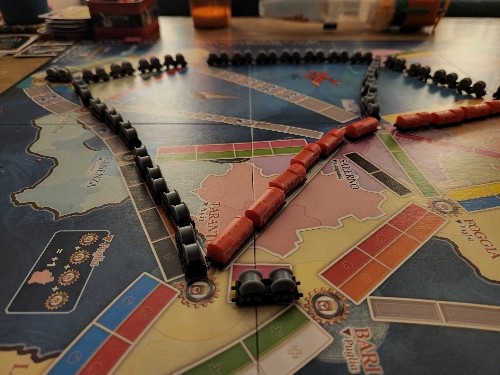 This does add a bit of time to end game scoring, involving all players counting the number of regions they have linked to (or, if their route isn't one continuous run, doing it separately for each section they completed). And, there are three regions that have bonuses for connecting all those cities in those regions. It's a bit more involved than TTR's “Longest Route” bonus, but considering most players will get a point boost of some sort, it is worth it. All cities are clearly marked with what region they belong to (via text below the city name) along with the regions icon/crest.

Both maps are extremely satisfying. Italy really surprised me because it has (somewhat) subverted the “Keep Drawing Route Cards” turns that usually end every game of Ticket To Ride. At the same time, it also feels the most “TTR” of the two maps, with plenty in common with the traditional U.S. Or Europe map. The Japan map flourishes when everyone plays it “straight” but weakens when a player/players tries to “game” the bullet train system. Both of these in one expansion is a great way to ride the rails once again in Ticket To Ride.

May 04, 2022
Rating
4.0
A Ticket To Ride Map Collection Volume 7 (Italy and Japan)
Both maps are extremely satisfying. Italy really surprised me because it has (somewhat) subverted the “Keep Drawing Route Cards” turns that usually end every game of Ticket To Ride. At the same time, it also feels the most “TTR” of the two maps, with plenty in common with the traditional U.S. Or Europe map. The Japan map flourishes when everyone plays it “straight” but weakens when a player/players tries to “game” the bullet train system. Both of these in one expansion is a great way to ride the rails once again in Ticket To Ride.
W
WadeMonnig Top 10 Reviewer 195 reviews

There are no user reviews for this listing.
Already have an account? Log in now or Create an account
Discuss this article
Log in to comment
Posts in discussion: Number One with a Bullet: A Ticket To Ride Map Collection Volume 7 (Italy and Japan) Review