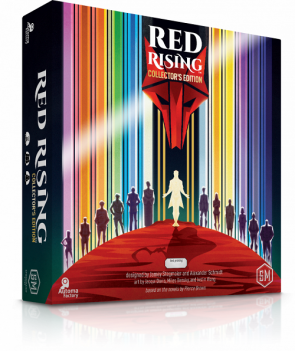 The quick and dirty explanation of Red Rising is that you play a card, do it's deploy action and then pick up a different card and gain one of the games resources. A quick and dirty review of Red Rising would be that Stonemaier games really thought putting Fantasy Realms and the Red Rising Universe together would be cool. Neither of these quick and dirty's are particularly accurate. Red Rising is more than “Pick a card, Discard a card” but it is going to make me feel dirty for wanting to use the corporate buzz word “Synergy.”

Take the Tyrion Lannister card: Alone he is worth 20 core points. It wants to be paired with Jaime Lannister which will give you an bonus 20 points if you also have Jaime in your hand. However, any other Lannister cards will cause you to lose 30 points per card. Or the 25 core points for the Frodo Baggins card that will gain you one breakfast token when it is deployed to The Shire and will earn you an additional 15 points if you can pair it with the Samwise card. Or the 15 core point Boba Fett card which let's you banish any gold cards underneath where he is deployed, with him earning an additional 5 points for every gold card in the banished pile at the end of the game. Of course, these above examples are fictitious: They aren't actually in the game but they do point out the major drawback to Red Rising: a vast majority of the players will have zero connection with the characters. Sure, the first Red Rising book sold over two million copies in the United States. But there is roughly 329 million people in the U.S. And that breaks down to less than one percent of the population who are familiar with the franchise. And what percentage of those are a boardgamer? And, more importantly, if not knowing why one card wants to be teamed with another is bad, not being able to remember a card you saw before because you can't recall their name is worse. I've played Red Rising the last few nights in a row and I can positively recall the name of two characters, Stallion and Darrow (and I remember Darrow, not because he is the main character from the book series but, because Paul Darrow played Avon in Blake's 7). What other cards stuck in my head? Surgeon, Magistrate, and the Loan Shark. A.K.A. The generic cards. The sad truth is that without having a mythology that is in the collective consciousness of the majority of the players, it would be better off just having generic but identifiable characters. 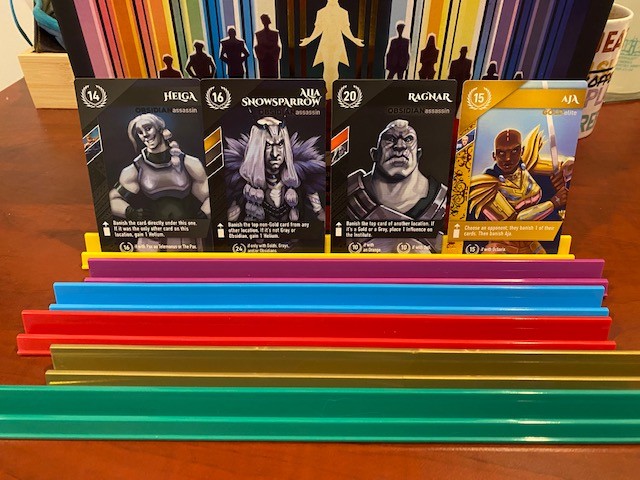 In short (or in this case, to sum up that long example), anyone who says the theme could be swapped out for something else or that it doesn't impact the game is mistaken. One of the knocks against the game is that it includes 112 cards and that is “too many.” But if this was Star Wars themed, could you imagine players bemoaning the fact that IG-88 was included? It also has 14 different castes (suits of cards) but if this was Game of Thrones themed, would they say it has too many houses represented in it? Is 112 cards too many? If you expect to track every single character, yes. Is 14 different castes too many? With Orange and Gray effectively wild, being able to stand in for any named card or any other colored card (respectively), not really. There is a certain symmetry to having seven cards of each color and 21 Gold cards and, if you actively remember those numbers, it informs your strategy. 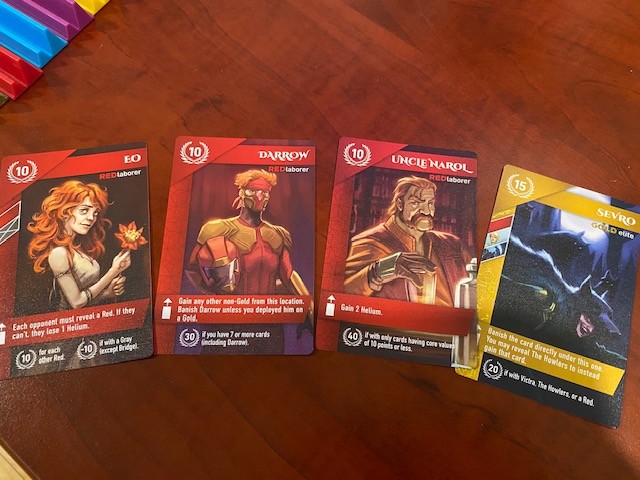 All the cards have plenty of action text on them and you'll want to read them all. So, with four different planet locations with cards on all of them, player's will routinely spend a good portion of the game with their neck crinked checking what is available. You start the game with five cards but you can have up to seven your hand at the end of the game. There is a penalty of negative ten points assessed for every card you have over seven cards at game's end. The problem with that is only 18 of the cards 112 in the deck have a CORE VP value (what they will be worth just by themselves at the end of the game) of less than 10, so it's not a significant deterrent. Which means if there is one dominant strategy for Red Rising, it's get as many cards as possible as you play. 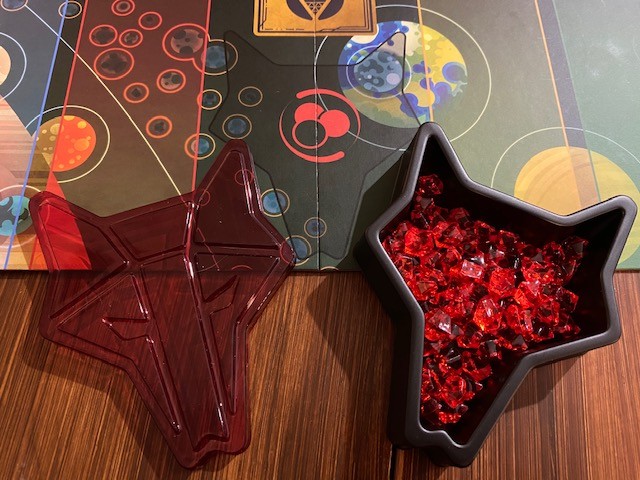 The nature of the game (building the best hand of cards) means that, usually, when the end game is triggered it is with a player or two that are feeling satisfied with what they have while everyone else feels like they were still working towards something. It can feel like the game ends on a downbeat for the majority of players at the table...or it can fuel post game discussions of would have/should have/could have. But it is easy to tell when someone is pushing for endgame because they will start using the Scout Action instead of the normal Lead Action, so you can't really complain that you were not warned. Also dealing with the nature of the game is being dealt cards: With the high number of Gold “Elites” included with the game, it's rare you are going to get a hand of five cards that you can't at least work with when you begin. But, sometimes that is going to happen and It can feel like getting dealt 7-2 off suit in Texas Hold 'em except there is no way to fold. But the game only runs about ten to fifteen minutes per player, even with the required reading, and I simply took it as a extra challenge when it did happen to me.

It's obvious to me that Red Rising is a labor of love for Jamey Stegmaier. He found a series that he adored and literally built a game around it. If I was in his position, you would probably be reading someone else's review of my Blake's 7 game. 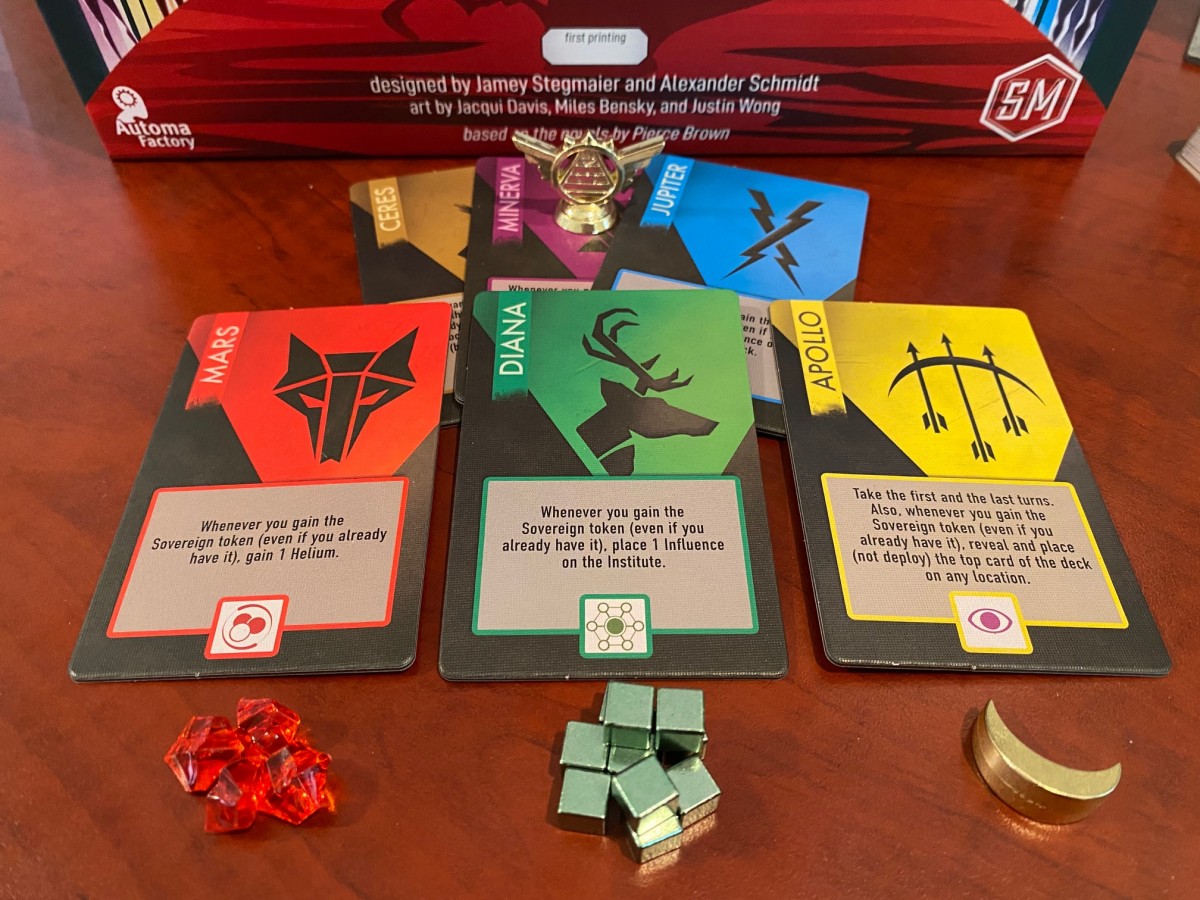 You may have noticed that I have brought up a lot of caveats of Red Rising in this review. But the great thing is that none of them have stopped me from really enjoying the game. We quickly made it over the initial hurtles, such as the lack of familiarity with the Red Rising series, to really delight in the game. Things like grabbing as many cards as possible might be a dominate strategy, it's not one you can pursue in every game. And any “going through the motions because I like my hand of cards” complaints are easily derailed because there is always that temptation of a card coming out that will make you disregard your original plan and figure out how to swap in a new card and gamble for a few more points. Maybe I should read the Red Rising series, It might be like this game and be about rising above obstacles and still having a good time.

May 12, 2022
Rating
3.5
Red Rising
Maybe I should read the Red Rising series, It might be like this game and be about rising above obstacles and still having a good time.
W
WadeMonnig Top 10 Reviewer 195 reviews

WadeMonnig replied the topic: #333297 26 May 2022 13:24
How anyone can say the Red Rising theme has no impact on their enjoyment of this game is beyond me. Any of the "collective consciousness" franchises I've mentioned in this review would have to sway the enjoyment/recognition factor.

Ah_Pook replied the topic: #333304 26 May 2022 16:51
I read the first Red Rising book after playing this game and enjoyed it. It's very squarely in the YA dystopian future sci fi genre, but I liked it well enough. Its certainly not about having a good time, so much as it's about adolescents being put into a weird Battle Royale kind of situation for... Um... Sci fi reasons? Genre requirement reasons? I meant to read the second one but haven't gotten around to it.

Re the game, I think it's fine but I think Fantasy Realms is the same thing but just better. Adding the board and the additional rules and complications did not make the game better or more fun imo.

Ah_Pook wrote: Its certainly not about having a good time, so much as it's about adolescents being put into a weird Battle Royale kind of situation for... Um... Sci fi reasons? Genre requirement reasons?

The lack of a sarcasm font failed me there. I listened to the first audio book after playing the game and thought that would be a funny way to sum up the review.

Ah_Pook wrote: I think it's fine but I think Fantasy Realms is the same thing but just better. Adding the board and the additional rules and complications did not make the game better or more fun imo.

I was ready to dismiss the board as extra fluff with no impact but going over our tally sheets, it was apparent that the tracks can make a real impact on the scoring. I think it can help balance scorewise when the cards you want aren't coming out and you focus on the resources.
Read More...