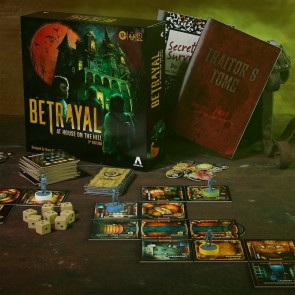 Back in 2004, Avalon Hill released the first edition of Betrayal at House on the Hill. At the time my store, Atlanta Game Factory, was doing great business – most nights we were packed with Georgia Tech students coming in to play D&D, Warhammer, Magic, and board games. When this game hit, it was an immediate sensation with our crowd. As a lifelong horror enthusiast, I was especially excited by how the game used a classic “old dark house” framework to drive its tile-driven exploration and its wonderful omnibus approach to its narrative. It reminded me of the now mostly forgotten Chill: Black Morn Manor which absolutely caused me to consider it favorably. Board game design wasn’t quite at peak “hidden traitor” just yet and the whole surprise heel turn twist that happens each game, often spinning the game off into unexpected and sometimes gruesome directions, was a delight.

The game was also a hot mess. I certainly don’t fault Bruce Glassco (whose other most notable credit is, incongruously, Fantasy Realms) because I think the design work here is solid – it’s simple, accessible, procedurally sound, and fun. But the wide range of “Haunts” in the two separate traitor and explorer books coupled with a volatile game state, unpredictable player actions, vagaries, inconsistencies, and screw-ups like the legendary Underground Lake on the 2ndfloor of the house often found some games soiling the rug more often than it ought to have.

But when it worked, it was awesome and honestly those awesome games are what have carried the game over 17 years including an expansion as well as a revised edition and Scooby Doo and D&D variants. It’s still, to this day, a supremely unique game; very few designers would dare to drop a one versus all elimination scenario right in the middle of a game that had previously been a co-op exploratory tile-layer. Let alone 50 of them.

So here it is 2022 and Avalon Hill, now under the Hasbro corporate umbrella, and Betrayal is back in a new 3rd edition. The new look is kind of sideways upgrade, it mostly looks as good as the last edition that is still on Target shelves and the components are about the same quality overall. The character art is notably better (and kudos for the representative range of ages, ethnicities, and skin tones) but at the cost of unpainted miniatures. Not a huge loss because well, the prepaints were pretty bad. Most of it is pretty much the same – it still has lots of necessarily generic tokens with no illustration just a label like PORTAL or SMALL MONSTER, it has the same stats trackers, same dice, and so forth. 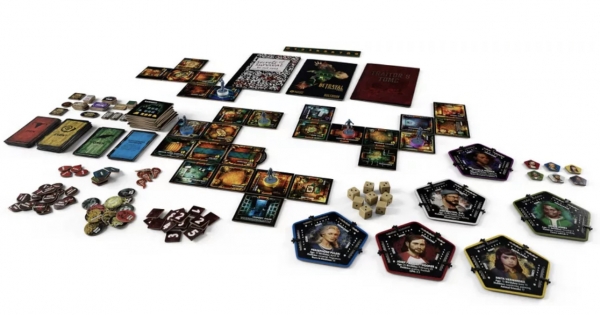 Which is fine, because it’s all kind of an “if ain’t broke” situation and I’m glad they didn’t go all Kickstarter with it and ruin its charm and accessibility with a $300 all-in invoice. Where the 3rd edition really counts though is in some of the changes made to the gameplay. The most impactful thing is that the Haunts are now keyed to a scenario card selected at the outset. This works with the omen that triggers it to determine which one happens, and each of the scenario cards roughly groups the ten Haunts on it into conceptual similarities as it gives the explorers a basis for their exploration and eventual discoveries. Haunts also trigger differently – when an omen is drawn, you roll a die for each one across all players and if the 1-2 pip dice come up with more than 5 pips, it’s on. Then, you set it all up and read an intro  before you go off with your group to read the separate Haunt books.

There are other tweaks that I think will go a long way to smoothing out some of the more rangy aspects that can show up in the gameplay. There’s no longer item stealing as default action, thank god. Keyword terms with definitions should standardize some effects. All actions are open information- the rulebook states clearly that anything secret in the Haunt books is only secret until it’s used.

I’ve hardly had the time or opportunity to play through all 50 Haunts so I wouldn’t be altogether surprised to find some weirdness out there, but the three I’ve had the pleasure of playing went well and were lots of fun. My son had a horror fanatic friend over for a sleepover so I couldn’t resist bringing it out and this kid just about lost his mind over the game. There’s all kinds of good stuff here- ghosts, aliens, monsters, possession, mad science, you name it. Some scenarios will have one Traitor, some more than one, and in some there’s only one explorer against the forces of evil.

Here in 2022, the simple tile exploration still works so well, there’s nothing fancy about it. If there’s a door, you can draw a tile and go into another room. Maybe you find an useful item! Maybe a spoooooky omen happens! Maybe the floor gives way and you fall into the basement! It’s all very no-nonsense, and I’m here for that in game design these days even more so than I was 17 years ago. Likewise, I love the dice-based resolution system and how damage specifically weakens you mentally and physically.

I’m glad that Betrayal is back and it’s in better shape than it ever has been. It’s still one of a kind, it’s still fun to play (especially with a table of six, but three is just fine), and I think it’s time to acknowledge that this game has matriculated to “classic” status. It remains one of the top horror titles ever published, and with this edition it looks to have many more years of haunting ahead of it.

Does the rule book say anything about playing older haunts with the new game?

Maybe I'll return to the House. IDK. I sold my 1st edition for a mint, and I gave away my half played Legacy copy during a Secret Satan exchange (surprise!).

I loved the idea(s), but the execution's consistency always left me anxious. And Daviau's fluff writing for Legacy was bad. Not so bad it's good. Just bad.

southernman replied the topic: #333293 26 May 2022 12:15
Thanks MB, one of your classic 'top shelf' reviews.
I have the original but it doesn't get out enough (much really) as my fun/fighty group is low on numbers and the euro group I show up with with higher numbers doesn't regards (well not all of them) games like this as worthwhile fun.
I've got the Betrayal Legacy game sitting unplayed for over a year due to the same numbers issue - I was just not going to waste it with three players when it has five characters, but our fourth player is returning after an illness so I'll probably have to play it with the four of us. And I'm extremely interested to see what type of game it leaves to be played after the 15 legacy games have been played (in comparison to standard Betrayal)