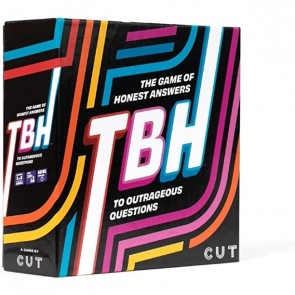 Game Name
TBH: The Game of Honest Answers to Outrageous Questions
Publisher
Cut Games
Designer
Players
3 - 8
There Will Be Games

Thank goodness they trimmed it down to something more reasonable.

One of the key components of TBH is you. Or, more specifically, your gaming group. For instance, during one of our plays a card came up that read (I'm paraphrasing because as I don't want to read through the hundreds of included cards to find it back): “Willy Wonka is real and back in business. He has created a new candy that makes your farts smell like freshly baked cookies. It does have some minor side effects. Do you try it?” Once the Dilemma is asked, the person reading the question (The Dilemma Boss) has to step up to answer any questions about the Dilemma, improv-style. The first questions asked was, of course, “What is the side effect?” “A finger falls off.” the Dilemma Boss answered. A collective gasp went around the table and it was at this point in the discussion that my wife selected one on her answer cards and slammed it face down on the table. The discussion continued and we were assured that the fingers would grow back. Then we progressed to the “Guess what the other player's answers will be” and every other player slid one of the guess cards to my wife, pretty damn confident of what her answer was due to her reaction. During the reveal step, my wife flipped over her card and we all stared at her. She has selected “Yes” she would take the candy. “Why!” everyone chorused. “Because, it is the one time in our lives when the Pull my Finger joke would actually be hilarious.” My own answer was No. My wife asked me why I chose No. I explained, “I was really worried what would happen next after the 10th fart.” 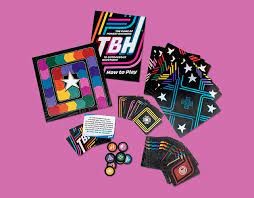 The majority of questions are lighthearted. But I really appreciated that the game has a “escape valve” built in if a player or players don't like where a question is headed. For instance, one question started with “Your Uncle is on his deathbed and has offered to pass on the secret of mind reading to you...” It sounds innocuous enough but if a player recently had a family member pass, it could quickly become a mood killer. TBH was forward thinking enough to include the “Hey, Let's Not” rule. If a dilemma question is asked or the answers given by that raise topics any player would rather not discuss, any player can play their NO cards face-up on the table. Putting down a single No card is an indication for the Dilemma Boss to back up and shift the discussion. Playing both No cards in front of yourself is an indication that the Dilemma Boss should discard the current dilemma and draw a new one. I just adore the fact that they included this in the actual rulebook, embracing empathy where many games instead go for Cards Against Humanity-style crassness.

The game works equally well in a party situation with people you know and as a quirky icebreaker for others you are only acquainted with. The scoring mechanism is unique enough that it plays like a real game. The number of points you score for correctly picking what another player answered is based on how many stars are showing on their personal playmat. Each players guess card covers up one star of the four stars on the playmat (The fifth star is revealed on the Yes or No card when you flip it over). So, if someone has telegraphed what their answer is likely to be by their line of questioning and four players choose to guess what their answer is, each correct guess would be worth a single point. However, if someone is harder to read and only has two other players guessing at how they answered, a correct guess at how they replied would be worth three points. 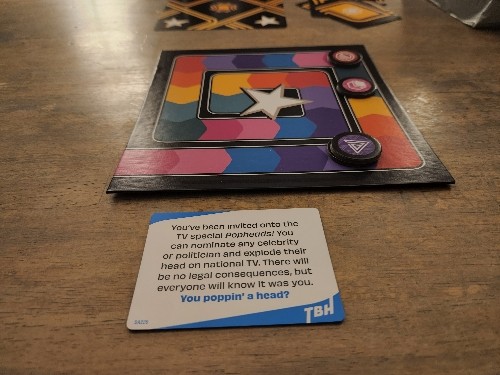 One (somewhat) minor quirk of the game is that the Dilemma cards are written with a certain style. They read like questions you would ask in non-formal conversation instead of being written specifically for clarity. This can sometimes lead to confusion during the answer phase. More than once we would begin to reveal our answers and a player would exclaim”Oh, I thought I was answering Yes, I would let the tiger eat me to save my little sister NOT Yes, I would run away screaming and let her be devoured.”

TBH is a hilarious game that really rewards you if you lean into it. At the same time, the improvisation skills required are virtually nil, so it's low stress when the spotlight is on you to be the Dilemma Boss. It is timed well, with the game wrapping up just about the time it starts to wear thin and the question cards are just off-center enough to be thought provoking and funny. 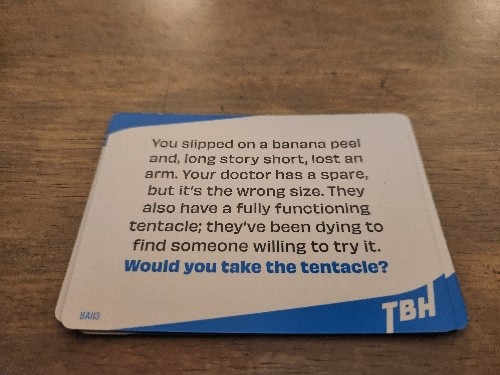 I'm going to be huge in Japan.

May 23, 2022
Rating
4.0
TBH: The Party Game of Honest Answers to Outrageous Questions
TBH is a hilarious game that really rewards you if you lean into it. At the same time, the improvisation skills required are virtually nil, so it's low stress when the spotlight is on you to be the Dilemma Boss. It is timed well, with the game wrapping up just about the time it starts to wear thin and the question cards are just off-center enough to be thought provoking and funny.
W
WadeMonnig Top 10 Reviewer 195 reviews