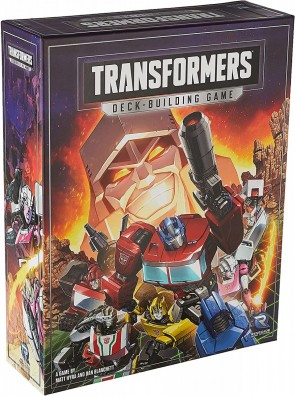 A good Transformers Game in Disguise?

There are few things that you can claim to be truly at the beginning of. I was there when I first saw and heard the Robots in Disguise, and those cartoons days when the Ark landed on Earth and Optimus Prime promised to protect the humans from the Decepticons. They were expensive toys and difficult to get hold of. We were living in the dawn of 'must haves' and forced shortages to create demand after the riots of the Cabbage Patch Dolls. I remember one of the spoiled kids at school (whose parents swapped actually giving a shit for lavish toys) proudly declaring he had managed to get both Megatron and Optimus Prime as toys and we jointly envied and hated him in one sitting. He used it as a bargaining chip to decide who his friends were and who were allowed to see his prize possessions.

So we took a number and waited our turn, and eventually I got a chance to see what the fuss was about. While Optimus was cool, Megatron was the one I liked. He just looked cooler and shinier and he turned into a gun that could lay on the ground and do nothing until someone else picked him up and shot him. I mean, that's got to be one of the most useless transformations you can do. I guess that's why he eventually changed into some kind of tank because his gun mode was just a little bit crap. Funnily enough the Toy version of Megatron was unbelievably crap as well. The lad couldn't even stand on his own feet without some ridiculous balancing and most of the time ended up on a crumpled heap on the floor. Optimus didn't have to wait for an chance to strike, he would just have to wait until Megatron fell over. Don't even get me started on how both Ratchet and Ironhide looked. Yeah. It seems that Transformers could never really live up to the hype that happened in people's minds.

Fast forward 25 years and Transformers still seems to spend its time trying to live up to people's expectations and even crossing the floor from plastic toy to cardboard. This isn't the first time someone tried to bring a Transformers card game to the table. Wizards of the Coast cancelled their attempt at a Transformers TCG back in 2020 partly because of the lack of interest from the fan base and partly due to COVID. So you could say Renegade Game Studios have a job cut out for them if they are looking to make this work. You make a deck builder and you better being doing something worthwhile with that format, as nostalgia will only help you so far.

Renegade have decided to push a more cooperative affair with their game and even added in some exploration to their deck builder. The players play across a Matrix, a grid of face down cards that represent the area of play trying to unearth Relics, Sites or fellow Autobots to bring to the cause. As the game progresses there's a chance you'll unearth a Decepticon underling or one of the more famous bigger well known faces that appear in a boss capacity which you'll then embroil yourself in a bigger confrontation that will up the overall challenge. Defeat three of these bigger bosses and you'll win the game. Exhaust the main deck and you'll lose the game.

You'll start the game with a basic deck that will give you movement, or power or even the much sought after Energon that Megatron always had a wee penchant for. You'll use these to navigate the Matrix, search or even buy cards that are unearthed. Sometimes you'll see a familiar face that you can bring into the fray with you, other times you'll find a site that gives you bonuses if you start a turn on that space. Eventually due to the way the deck is stacked, you'll come across a Boss, and you'll use a combination of the energy gathered, you're allies and potentially other players Assists in order to take them down. Though depending on the mode you're playing, having to resort to help will award them with victory points.

You're encouraged to continually buy cards to strengthen your deck, as failing to leave a blank area at the end of the round results in the destruction of the top main deck card, and that brings you closer to failure. There's a interesting surprise mechanic where if you unearth a Decepticon while searching, they'll be able to launch an ambush on you which can potentially lose you valuable Allies or resources. Defeating them will result in victory points and potentially one step closer to unearthing the main bosses. In essence, TDBG is all about burning through the deck as quickly as you can in order to find the bosses and making sure you are well enough prepared to deal with them when they do arrive.

I really appreciate that Renegade have tried to reduce over complication of the main resources where possible and kept it down to Movement, Power and Energon. I've seen too many card games bring in 'yet another resource' that you have to manage and master and ultimately only use very occasionally in the game.  Also while you are playing one of the Autobots and you can transform, it's not a mechanic that you feel is forced on you at any point. You're given the freedom to pretty much spend most of your time in robot form if you want to though each mode does have it's own perks that you can buy using precious Energon in order to win the day. It's funny, because while you know you're playing a Transformers themed game, it never really pushes it down your throat. So when your favourite character turns up when you flip a card, it's still pings that little joy nerve. I guess in the bigger bosses, it would have been nice to see them mechanically be able to transform, but I think it would add an additional level of complexity that wouldn't be warranted.

The only thing I have a bit of a gripe with is the rulebook. It's not the most user friendly and really needs to separate out the core differences between the play modes. I would have preferred to see a completed competitive play section on its own, the same with the Solo and Co-op modes. I know it would have ended up with a meatier manual, but it would have made the learning experience that little bit easier. There's walls of text that maybe need some more graphical representations. The rulebook explains how to activate block, but isn't entirely clear when you should use it when it comes to negating damage. I was confused about how the ongoing boss attacks work, as the examples seem to suggest you're usually winning every fight first time, which isn't always the case. Considering the Bosses are literally the only way to win the game, it seemed strange to not have a bit more of an explanation which specifically dealt with them as characters. Some of the Decepticons have a purchase value and effect, but you don't seem to be do anything with them except fight them. Luckily the game isn't swamped with a plethora of additional mechanics and is fairly straightforward to pick up.

Once you get around those impediments, Transformers Deck Building Game starts to rattle along at a decent pace. The iconography is clear and precise and there's little ambiguity on what the various powers do. The art direction is of course fantastic and filled with all the fan favourites and you'll catch yourself nodding and smiling as you turn over cards on your adventure. The Energon cubes should smell of strawberries and this is a huge missed opportunity that I have been assured Renegade will be fixing in the next printing. The additional modes offer a good amount of replay, and you can scale the game up from cooperative to competitive once everyone has a grasp of the main game. There's a lot of effort gone into this game to make sure the IP isn't just window dressing and it shows in the overall exploration approach Renegade have taken. It's maybe not the ideal Transformers board game that your inner child longs for, but in fairness I'm not sure that exists. It need dice though. So you could roll out. Wow. Totally wrecked it..