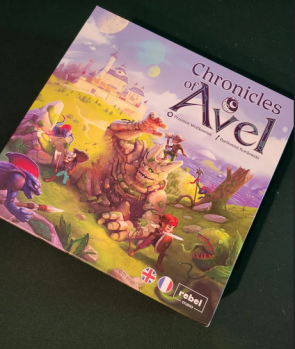 For a while now I’ve been looking for a game that I could play with my younger nephew. Obviously, this needed to be something that we could both simultaneously enjoy which can sometimes be a tough ask when looking for something to please a different generation.

In short, when it comes to family-friendly games that are suited for younger and older players, there are not too many options. Generally, most games either cater to an adult crowd or kids with little in between. However, The Chronicles of Avel nicely meets somewhere in the middle and is fun for both kids and adults. Basically, it isn’t dumbed down and overly basic and it isn’t too deep either. This means that as an adult you can enjoy it, whilst kids will too.

For those wondering, The Chronicles of Avel was designed by Rebel Studio. These are a Polish company that are responsible for other games such as Nemesis and Drako. Looking through their catalog, it appears that Rebel studio specializes in making fantasy games.

The premise of The Chronicles of Avel is that you’re fighting to defend your castle. There are several monsters that will try to break your defenses and destroy your kingdom that you need to defend. So, you will need to use your champion to kill these monsters and the final boss, also known as ‘The Lord’. If any of these monsters touch your castle then you lose, whilst The Lord is basically a bigger version of the other enemies.

In case you hadn’t already figured, this is a fantasy game that has giant spiders, undead lords, and monsters trying to destroy your people. As a fighter, you carry a weapon such as an axe or sword, a shield, and a backpack. In this backpack, you can carry money, weapons, and upgrades which can all help influence the game. Each time you kill a monster you have the chance to earn similar items – but they can also take away your health points.

This game can be played solo or up to four players in total. The way it works is that you can draw your own character onto a sheet which is nice in terms of customization. I especially liked this feature as it allows you to express your own personality onto your character. This is nice for kids too who can get extra creative.

You can even name your hero which is another good touch and adds to the experience. After creating your character, you can add weapons, gold, and health which will all relate to how you do in battle. Whilst playing this game alone is fine, it’s probably best played with more people which adds to the atmosphere.

This is a co-op game so playing with others brings more of the strategy element into play, whereas a solo run is based on slightly more luck in comparison. Honestly, I wouldn’t really want to play this game on my own either but it’s at least a good addition if that’s what you’re into or if you’re bored.

Talking of which, it can be quite nerve-wracking when using the combat system. Here, you roll your champions dice with the monster you’re fighting. This will ultimately determine your success and changes the course of the game. In our game, my nephew was literally screaming with delight when we just about killed one of the monsters which brings a tense yet fun element to the game.

In other words, The Chronicles of Avel relies massively on dice rolls and luck. This isn’t anything new and if you’re into dice games then it may appeal. Having said this, other than how you spend your money, there isn’t that much skill involved which may also leave players feeling a bit helpless at times. At the same time, there is at least some strategy required.

For instance, if a monster is close to your castle then you can buy defenses that can effectively give you an extra turn. This purchase could make or break you, depending on how the game plays out. Having said this, The Chronicles of Avel is a game that’s aimed toward kids so you shouldn’t go into expecting a very serious experience either. Still, as previously mentioned it’s good fun and has enough going on to keep you and the other players occupied.

Another positive of The Chronicles of Avel is the artwork. Obviously, the gameplay is more important than the artwork. However, it is really well done and has a depth of colors and quirky animated style about it. This only adds to the fantasy atmosphere and is almost reminiscent of the video game Kingdom Rush with its style.

Whilst on the subject of artwork and design – The Chronicles of Avel also has plenty of colorful tokens and 3D characters such as your own heroes and monsters. Overall, these are nice touches that don’t go unnoticed and may bring more fun to younger players. On a similar note, the feel and style of The Chronicles of Avel is ideal if you’re wanting to get younger players into gaming.

As I mentioned earlier, most games are at either end of the spectrum with a big division between adults and kids. However, this game gets it right and could inspire children into a lifetime of gaming.

This comment may sound dramatic but it’s possibly true. Because this game isn’t too dumbed down it should appeal to kids who are intrigued with board games in general. As a result, this could potentially be the game that sparks their interest. Just remember that this game is targeted at kids aged 8 and older, so it’s probably not suited for very young children anyway.

In summary, there’s enough going on in The Chronicles of Avel to appeal to adults and kids alike. It may not have the most detailed gameplay ever and is pretty simplistic but ultimately that’s part of its charm. The good news is there’s also an expansion set available if you like it which gives you a bit more gameplay and different scenarios. Sadly, not every game has expansions which can be disappointing if you’re wanting more.

June 23, 2022
Rating
3.0
The Chronicles Of Avel
There’s enough going on in The Chronicles of Avel to appeal to adults and kids alike.
U
ubarose Top 10 Reviewer 65 reviews