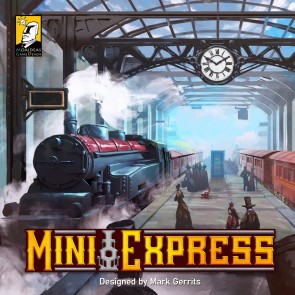 Train games are big business in the board game world. From the approachable, best-selling genius of Ticket To Ride, to the brain-melting, it’s-really-about-shares-and-not-trains of the 18xx series, there’s something for everyone. What if you want something that sits somewhere between those two extremes? Something with a share and investment structure, but not too dense, and you still get to play with tiny trains? Mini Express from Moaideas looks to have you covered – all aboard! 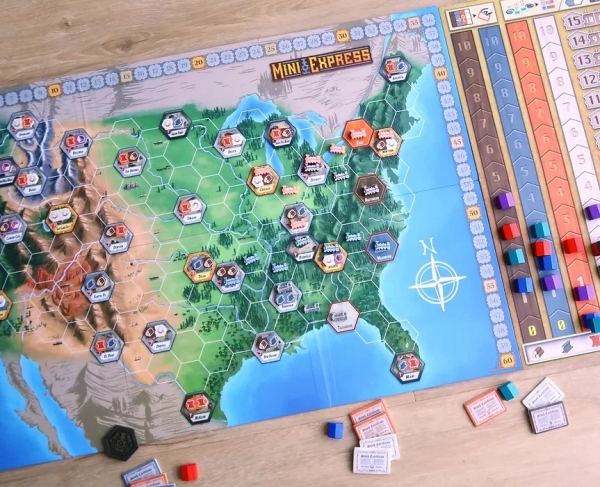 So, how do you create a game about shares and investment, but keep it simple? The best way to do it is to keep the actions simple. If you make the gameplay simple, it leaves your brain free to churn away at a strategy, and that’s precisely what designer (and artist, the clever chap) Mark Gerrits has done with Mini Express. It’s essentially a cube rail game, similar to others I’ve covered before, like Luzon Rails and Ride the Rails.

Your turn in Mini Express is limited to doing one of two things. The main thing you’ll be doing is adding tracks to the map, by taking some (incredibly cute!) wooden trains from the relevant company’s supply, and plopping them onto the hexes between two cities, extending their railway track. Once you’ve done that, you move that company’s track length marker along its track. Longer tracks are worth more points at the end of the game. 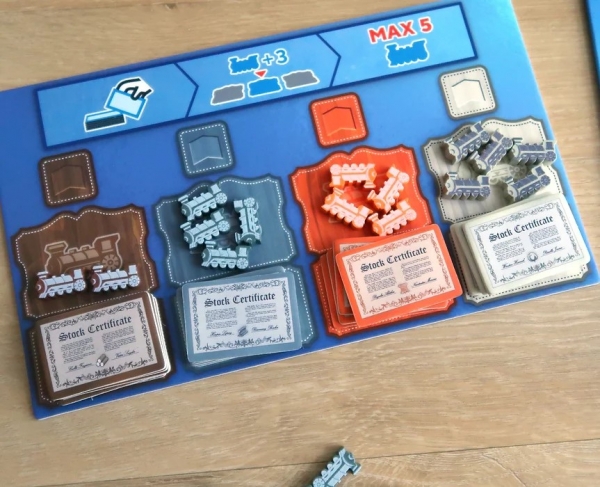 The other action is taking a share. It’s another simple action: you take a share certificate from the company’s supply, decrease your level of influence in that company by the number of trains in their supply, then add three more trains to that supply.

That’s it, that’s all you can do in Mini Express. Doesn’t sound too daunting now, does it? It also doesn’t sound that exciting, or interesting, when I break the game down like that. The truth, however, is that this game is very good, and very tense. All of the excitement in the game is generated by the four different colours used, and the interactions between tracks and companies.

In Mini Express there are four goods types – cotton, timber, metal and leather (or maybe skins, they’re never actually named in the rules). They correlate to white, brown, grey and orange colours, which just so happen to be the same colours as the companies you’re investing in, and the tracks laid on the map. There’s a weird dichotomy whereby it feels like it should be really easy to understand how they all relate to one another, but in truth it feels oddly confusing in your first game or two. 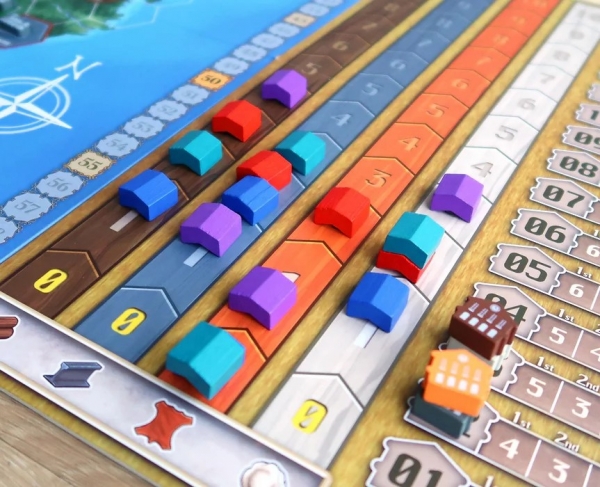 The longer the track in a particular colour, the more points each share is potentially worth at the end of the game. Each time you connect a track to a new city, you take the token from the city, which in turn increases your level of influence with the companies whose colours are on the token. Are you still with me?

The person who ends up with the most influence in each company gets a number of victory points shown on the track length chart, multiplied by the number of shares you have in that company. If what you’re taking away from this garbled explanation, is that you want to have shares and influence in the companies with the longest tracks, you’re correct. It just feels much more difficult to explain that with the game set up in front of you, which is a weird feeling.

Once you get your head around what you’re trying to do in Mini Express, the game comes alive. Much like choosing a sandwich on the buffet car on a train, there’s a lot to sink your teeth into, but bad decisions can leave you feeling sick. You start out with concrete plans for the game ahead, which some git will shatter like a pneumatic drill, by claiming a connecting city you really wanted. You’ll find your loyalty to lines and colours changing as the game goes on, and it’s the player who most carefully treads these shifting sands who will do well. 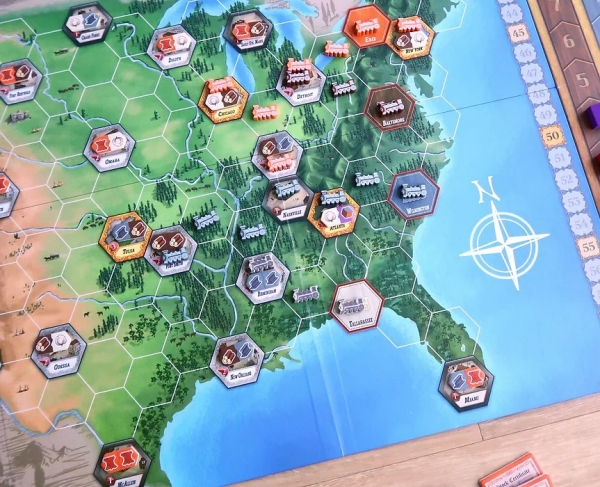 Despite only having two actions to choose from, you’ll find yourself agonising over decisions nearly every turn. There’s this brilliant mechanism which means to take a share in a company, you have to give-up influence in that company, to the tune of the number of trains left in their supply. It means you don’t want to take shares if there are too many trains left, but in the same breath, if you lay track using all of the remaining trains in a colour, the next person is left to pickup a free share.

Mini Express has a ton of interactivity, but no real ‘take that!’ mechanism, which I really like. Some games suit direct attacks between players, but not train games. Making a malicious move just to deny someone is a possibility, but it’s highly unlikely, as it benefits nobody. I love that the end-of-game trigger is very visible, which leads to some very exciting last few turns, waiting to see who’s going to end the pursuit of railway riches.

The more cube rail games I play, the more appreciation I have for the design nuances the designers use. Just like in Ride The Rails, Mini Express has simple, quick turns, and revolves around putting trains on hexes to make tracks. The two games feel very different, in spite of their genetic similarities. Mini Express has a lot more going on, and is a more difficult game to get to grips with. It’s a brilliant game.

The components are outstanding, but I do have a minor complaint about the screen-printed trains. The grey trains have white printing, while the white have grey printing. It can make them confusing when you’re trying to look at routes on the board. There’s a really simple solution though, just lay them face-down.

The solo mode plays a decent game, but it’s no substitute for three to five players. With more than two playing, there’s a terrific feeling of competition. There are some great variants for both the USA and Europe maps (the map board is double-sided!) which throw in some more things to think about, should you get tired of the standard game. Mini express is great. The way it combines simple actions with difficult decisions is utterly compulsive. If you like cube rail games, or are looking for an entry point to the sub-genre, look no further.

Review copy kindly provided by Moaideas Game Design. Thoughts and opinions are my own.