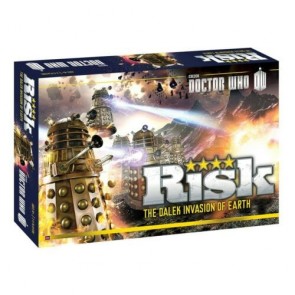 Game Name
Doctor Who Risk: The Dalek Invasion of Earth
Publisher
Hasbro
Players
2 - 5
There Will Be Games

Welcome to another edition of Discount Dive where I look for games that are on the cut/deeply discounted. In the case of Risk – The Dalek Invasion of Earth, I found a used copy on the shelf of my local game store for $20.00. I checked Discount Dive’s non-existent guidelines, and, sure enough, I am required to review all things Doctor Who.

The only thing this version of Risk takes from the first doctor's serial “The Dalek invasion of Earth” is literally the title. Instead, it spins a story of a Dalek civil war with various factions of Daleks fighting over an “Artifact” found on Earth that will allow them to reign over the universe. It stretches the Doctor Who mythology pretty damn thin to facilitate this version of Risk..and, if you have ever watched the show, that is really saying something. Players pick one of five groups/colors of Daleks. Small Daleks in your army represent 1 troop and Large ones represent 3 troops....and that's it. I mean, they did use a couple of different molds since The New Paradigm Daleks are included as the Red and Yellow Armies. You do remember the New Paradigm Daleks, right? The ones that were introduced in the 11th Doctor's “Victory of the Daleks” and then the show immediately pretended never existed? 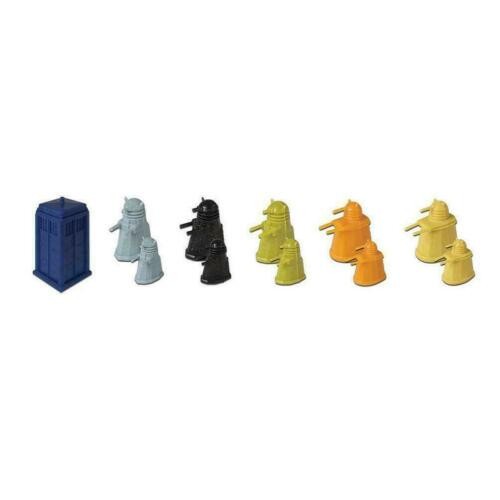 Anyone who is even remotely a fan of Doctor Who read the above paragraph and likely commented how much of a missed opportunity it was not to feature five separate enemy races. We can only imagine how amazing having Daleks, Cybermen, Sontarans, Silurians, Zygons and maybe even Time Lords battling across the surface of Earth. Of course, U.N.I.T. could have been teamed with Torchwood to actually fulfill their mandate to defend terra firma. Every race could have asymmetrical powers and...(Slowly backs away from designing a Epic DOAM in the Doctor Who Universe). What we got was Risk with Daleks and a smattering of Doctor Who flavor. If you were hoping for drastic changes like those found in Risk 2210 or Risk Legacy, this “One swipe with the Sonic Screwdriver” version isn't going to impress. 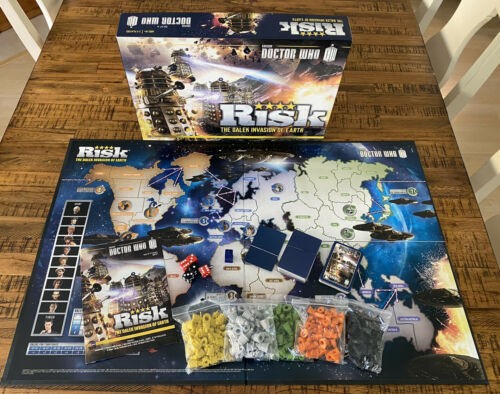 It does pull some of the better things from other Risk variants. It includes a Timer. (Ha! Time Puns) The sole chit included in the game is one of Clara Oswald. At the beginning of a player's turn, a location card is pulled to determine where the TARDIS will appear on the board and if it features the image of Clara, you advance the Doctor one “regeneration.” (Spoiler Alert: Half the cards include a picture of Clara. Far from “Impossible” she is pretty inevitable.) Once Clara reaches the end of the Doctor's regeneration's, the game ends. Which, for those keeping track of when this was released, is after Matt Smith's 11th Doctor. The card draw location is where the TARDIS lands and it renders it...peaceful. No combat can be initiated from or occur within that location. I can't say that would make a very exciting episode in the series but “The Truce of the Daleks” is constantly on re-run here in the Risk world. 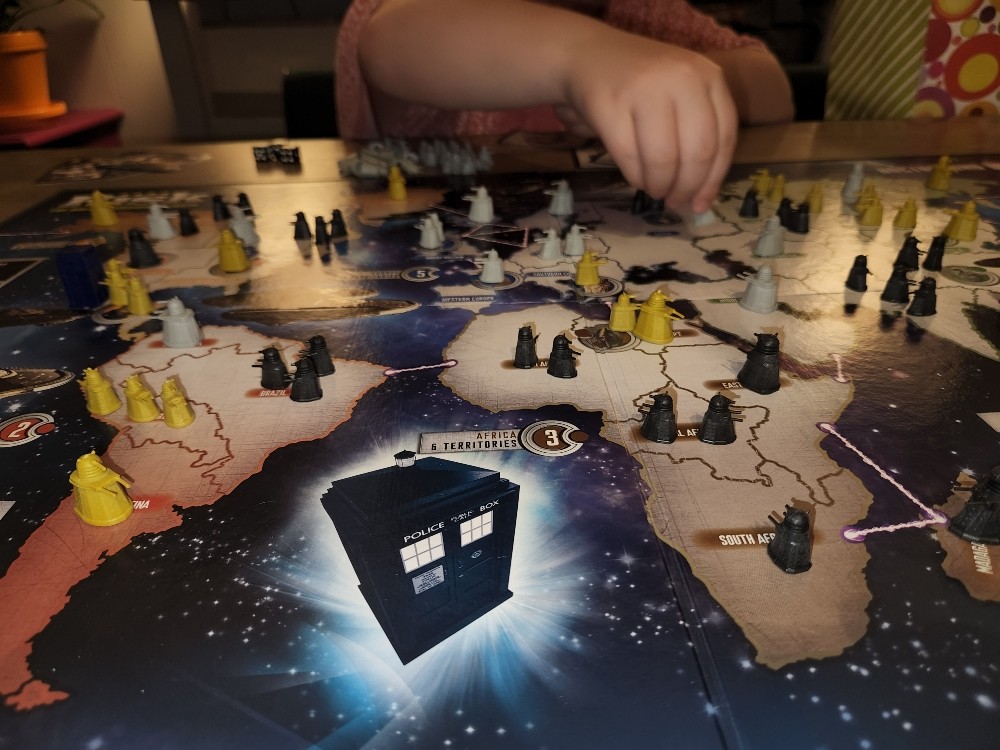 Also pulled in from other versions of Risk are the Mission Cards and the Power Cards. Both are one-shot rewards that, in the case of the Mission Cards, you gain additional troops for taking over a specific location. In the case of the Power Cards, you want to use these for an advantage on a turn when you plan on making big Dalek moves. It could be something like rolling a die and adding that many Daleks to your attack force or playing a card at the end of your turn that states, until the start of your next turn, you add one to all defensive rolls. Just don't hold onto them for too long, if you are exterminated, the victor takes your spoils. 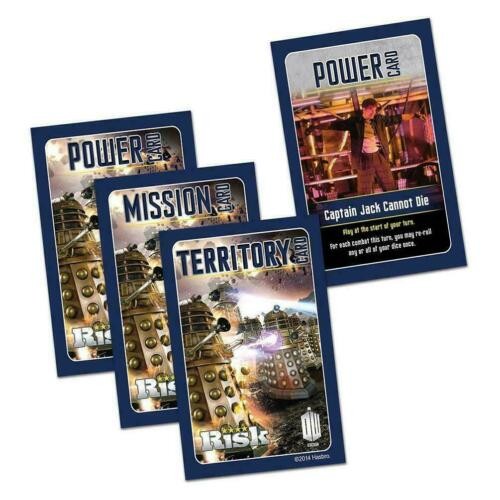 Other rules are standard Risk fare: The number of Daleks you get per turn is based on how many territories you hold at the beginning of your turn and and this graph is printed on the board. But, they missed an opportunity to make it big enough to put a Dalek on and use it as a tracker. Instead, you do the ole “Count them up on every player's turn.”

I know this might sound silly but what I wasn't prepared for was the Time Travel aspect of this game. No, not in the rules or the setting but that feeling when I started rampaging around the board. Suddenly, I was 12 years old again and rolling dice to take Alberta. I've played Risk over the last few years in it's digital form but, damn, I never knew how much I missed that physical feeling of hefting Risk dice onto the board. That rush, that tactile sensation, that nostalgia. That was true time travel for me.

According to the rules, the game continues until all opposition has been eliminated or Clara reaches the end of the Doctor track. In the latter case, you add up to see who controls the most territories and that Dalek player wins. However, in my head canon, if no one has dominated by the end of the game, The Doctor forces the Daleks to retreat from Earth and the Doctor wins. I like my happy endings.

Literally nothing is stopping you from playing without the timer and Power Cards if you dig Risk at it's normal slog...err...pace. Because, despite the thin veneer of the Doctor Who setting, it's “just” Risk. But I can't say I don't enjoy pushing Daleks into Madagascar and bellowing “Seek. Locate. Destroy.” even if my vision is a little impaired by nostalgia.

July 16, 2022
Rating
3.5
Doctor Who Risk- The Dalek Invasion of Earth
Literally nothing is stopping you from playing without the timer and Power Cards if you dig Risk at it's normal slog...err...pace. Because, despite the thin veneer of the Doctor Who setting, it's “just” Risk. But I can't say I don't enjoy pushing Daleks into Madagascar and bellowing “Seek. Locate. Destroy.” even if my vision is a little impaired by nostalgia.

There are no user reviews for this listing.
Already have an account? Log in now or Create an account
Discuss this article
Log in to comment
Posts in discussion: Discount Dive: Doctor Who Risk- The Dalek Invasion of Earth Board Game Review

jpat wrote: I showed my wife the review, and she said excitedly, "Get it." Of course, she also likes Axis and Allies and Zombies.

That's on my Discount Dive list if I ever come across a discounted or used copy.

My goal is to drive this into the BGG Hotness only to have people start threads asking why it's in the Hotness.

jpat wrote: There was a new one on eBay for $25 (+shipping), and there were others in about the same range, but I gather you're talking about serendipity.

I usually buy my discount dives with store credit from my FLGS or at Minature Market Ding and Dent. I like the idea of coming across it "legit" instead of seeking them out.
Read More...