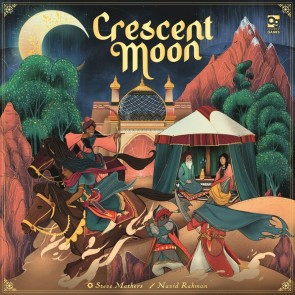 When asymmetry is done well in a game, it’s brilliant. I’m not talking about games with different end-game objectives for each player. I’m talking about games where each player plays the game differently. From the welcoming, woodland setting of Root, to the frozen Finnish battlegrounds of All Bridges Burning, wargames tend to do asymmetry best. Crescent Moon is the new kid on the block, moving the strategy to a non-specific Caliphate, somewhere out in the desert.

The world of Crescent Moon is some hex tiles laid-out on the tabletop. Each hex has a type, such as fertile, wilderness, and mountains. Some of the hexes have a river running through them, which act as an impassable barrier. Not ideal when you’re one of the factions trying to expand their domain. One tile has a crossing, which acts as a bottleneck and a hotly-contested pied-à-terre.

Using hexes in this way is clever, it allows for multiple layouts, and different layouts for differing player counts. I’ll come back to player count in a bit. It’s a design decision which means the game takes up less space on the table, and more variety without buying additional maps. The landscape types are very visible and obvious, which is something that can be harder to convey in a COIN game, for example.

The biggest initial confusion you’re likely to face is the colours of the units. For the most part, they’re really clear. The Warlord has black pieces, the Caliph is blue, etc. The Sultan, for reasons best known to himself, has green and pale yellow buildings. Not a problem on the face of it, but if you’re playing with five players, the Nomad is in the game, and they have yellow pieces. It’s a shame, as aside from that one visual disconnect of pale yellow and yellow belonging to different factions, it’s the most innately accessible war game I’ve played.

Crescent Moon shares a lot of its biology with the COIN series of games from GMT Games. It might look different, but once you scrape away the friendly veneer and bright colours, what you’re left with could easily be re-imagined as a COIN game. The concepts of presence and influence in Crescent Moon naturally map to control and support in a game like Cuba Libre. Similarly, there are a series of ‘standard’ actions, which many factions share. Recruiting, moving, assaulting, building: learning how to do the basics for one faction means you can learn another, mechanically, pretty easily.

The biggest divergence Crescent moon has from both Root and a COIN game is the way scoring and goals are handled. Instead of a visible score track with obvious win conditions, Crescent Moon is played over a set number of rounds. Years, in the game’s parlance. Whether you choose to play the short or long version of the game, once the requisite number of rounds are played, scores are tallied and a winner declared. This works because the VP tokens (aptly crescent moon shapes) are stored face-down, and look the same from the back, regardless of their value.

I’m not a fan of this method of secret scoring, not in a wargame setting at least. What makes games like this so interesting are the interactions between the players. Despite everyone having their own aims and scoring methods, there’s usually a bit of ‘the enemy of my enemy is my friend’. Some actions are mutually beneficial for different factions, and you get situations where players form temporary alliances to reel in a leader. You can’t do that in a game where you don’t know who’s winning for definite, and it makes alliances hit and miss at times.

I mentioned player count before. The player count for Crescent Moon is its biggest problem. There’s a minimum of four players, and a maximum of five. What do you do if you only have two or three people in your group? You either give someone else an extra faction or two – which can unfairly weigh the game in their favour – or you don’t play. There are some of you reading this now thinking “No problem, we always play with four”, and if that’s true for you, then great. For anyone else, it’s a real problem.

In Root, there are options to play with fewer factions, without overly disrupting the game. In Crescent Moon, the different factions are so inexorably linked, and dependent on one another, that it’s not an option. Those links are baked into the game, and so integral to the way the game pans out that each player has Year One objectives to aim for. If you complete them you get VPs that are only available in the first round, and in persuading players to go after them, it helps set up the game state to keep things running smoothly.

The other option for lower player counts would have been AI/Automa opponents, as GMT do with the likes of Gandhi. Granted, it introduces more cards into the game, and more flowcharty decisions to run the bots, but it at least means you can play with two people – or even on your own. I can’t see any obvious reason to not do this for Crescent Moon, other than the overhead of design and playtesting, and it’s a real shame. The game, despite my quibbles, is a really good one. Sadly it’s a game that many people will never buy, because they know they’ll seldom get to play it.

I have a few issues with Crescent Moon, for sure, but it’s not a bad game. Quite the opposite, it’s actually a really good game, and I think it would be my recommendation for anyone curious about COIN games, but hesitant to dip their toe. The phase structure to each round and finite round limit make it a great option for Euro gamers looking at war games. The player aids are excellent, and I love the way they give advice for new players. It really helps in your first game.

The restrictive player count is where I have a real problem. There are so few games that lock your options to four or five players, and it stands out as a bit of an oddity. To give you an idea of how rare a beast it is, there are only four games in the BGG top 10,000 that restrict you to four or five – and that includes Crescent Moon. I wish they’d just made the extra effort to add AI players. Even if the best experience is with five players, you could still practice, and get some enjoyment out of your game between meet-ups.

If you’ve played Root to death and want something else with that same lop-sided, territorial tussle, Crescent Moon is great. The factions in my – admittedly limited – experience seem really well balanced, and the rules are very easy to follow. It’s also worth trying if you’re tempted by the COIN games but aren’t used to the GMT style of rulebook.

Crescent Moon then – a really clever, really good wargame-lite, with an unfortunate dependency on player count. If you’ve got a regular group of four or five, it’s a great choice. If not, just weigh up how often you’ll play against the cost of buying.

Review copy kindly provided by Osprey Games. Thoughts and opinions are my own.