When do we call a game a classic? It’s a term that gets banded around more than I personally think is deserved. An accolade that should be left for those games that define a moment in design, culture, or a turning point in how games are perceived. There is whole other article in that thought I guess.

Tigris & Euphrates was originally released in 1997, designed by the man of 1000 designs himself, Dr. Reiner Knizia. It is considered by some, according to the Boardgamegeek page, to be his masterpiece. I haven’t played nearly enough Knizia games to make that claim. What I can tell you are my own impressions of the game.

Tigris & Euphrates is a deceptively simple affair. A hand of tiles and some leaders are your main tools for dominance. 4 different colours only define the nature of the tiles and leaders. As you survey the board you’ll puzzle over where to begin your kingdoms. Branching out from one of the red temples on the board, your green leader goes down first, then a green tile in the same kingdom. A single point is gained and you turn is over, quick as you like. Your points are open to you and secret from everyone else, your success and failure known only to you until the end.

There you go putting down leaders, building up kingdoms, accumulating points. So far so simple. If only it weren’t for the now famous Knizia scoring system. You see at the end of the game you aren’t just going to score all the points you have accumulated in all the colours. You are going to score points only for your lowest colour. 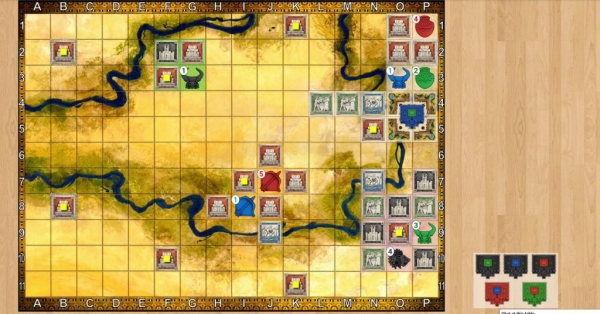 Not a game I played in, but one that shows the leaders (bull, lion, urn, bow and arrow), monuments at O4 and a war about to break out to the right

Now we are off to the races. I have a limited hand of tiles. Maybe its all green, but whatever it is it won’t be enough for me to balance a trickle of points to the finish line in such a way as to secure victory. It sounds like we need to go to War!

Kingdoms will build and encroach upon each other. When two kingdoms are joined by a tile, colour matching leaders in those territories will have a scrap. There is no complication here, just a simple counting of the relevant colour tiles in each kingdom bolstered by ones from your hand. The victor wipes out the tiles of that colour in the opposing kingdom, providing opportunity for growth and renewal. Oh and a huge stack of points, one for each tile removed.

Now every time you lay down a tile it just has to connect to a temple or an existing tile, not even on in a Kingdom I have a leader in. That means I can start wars that don’t even involve me, I can light the match that leads to an explosion of action. That’s brilliant and a fantastic feeling when two players look across the table at each other, then at you, and you can see the expletives in their eyes.

I can make Adam and Hal have a fight and watch as the dust settles. Sure one of them will get a bunch of points, but do they need those points? 25 green points mean nothing if you only have 3 blue so what does one more war matter? Points are hidden until the end of the game so this is a risk for sure, but maybe I can take advantage of the aftermath.

War is great for those big dramatic splashes of points, and the dramatic reveal when someone overstretches and is beaten back from their aggressive footing. What if I don’t want that though? What if I just want to build?

When you cover a 2x2 section of the board in the same colour tile a monument is erected. This monument will have two colours, one the same as the tiles that caused it to form, and another down to the choices left at the side of the board. Every round a leader is in that territory that matches one of those two colours, they will gain a point at the end of the round. Now suddenly building is a great way to gain points. Build monuments, see the points flow in! Yeah they can be taken by war but I am comfortable in the strength of my armies. However, in the streets of the Kingdom a revolution is building.

War is big and dramatic, but change can also come through quiet, or not so quiet, revolution. Since leaders can be placed next to any red tile on the board they can be picked up and chucked into any kingdom. When one kingdom has two leaders of the same colour like this, a revolution happens. The people have to choose between the two. Now it doesn’t matter how powerful you are in a revolution like it is in a war, just how many red tiles you are adjacent to, bolstered by those in your hand. Even the most beloved war leader can be brought down by internal strife.

But wait, there’s more. Natural disasters are just one of those things a good leader has to deal with and Tigris & Euphrates is no different. These special tiles can be used to shatter kingdoms, see off leaders, and probably other things as well. I’ll admit I haven’t used these to great effect yet but I’ve seen others do really clever plays with them as they tear apart a kingdom only to rejoin it with war.

On paper Tigris & Euphrates sounds dry, boring, pedestrian. All you are doing is laying tiles and occasionally counting tiles to determine victory. In play though it is a game that positively thrives on dramatic swings in momentum. The entire game can turn on the single laying of a tile as war and revolution breaks out left, right, and centre. Evey tile laid changes your options. Every turn your hand changes, closing off one avenue to victory while opening up several others.

The game thrives on improvisation and taking chances. That's not to say there isn't some deep strategy here, there is. You have to anticipate, plan, and know the difference between a time to build and a time to lash out. The game though doesn't just want quiet strategising, and thoughtful plays. It wants big, bold action that will shake you to the core as kingdoms clash, revolutions overthrow solidly held positions, and catastrophes shatter kingdoms.

Tigris & Euphrates is a true classic of tabletop game design. It has a paucity of rules, and a banquet of possibilities. Whereas a lot of modern designs rely on complexity for depth, here is a game that realises the benefits of being able to easily hold the entire game in your head while allowing for brilliant plays, egregious backstabbing, and devastating turns. It deserves to be preserved for all to play on Boardgamearena and I hope it sees a reprint as soon as possible. I for one will be first in line to buy it.

I’ve played Tigris and Euphrates in real life many moons ago. This review has been spurred on by a series of games played on the BGA version of the game. It is now fully released on that platform.

Agent easy replied the topic: #337553 21 Dec 2022 08:18
One of the cleverest things about monuments is that the four tiles are lost in the process of making the monument so that great influx of points is never a no brainer… you are significantly reducing your strength to make it happen and simultaneously making yourself a target (since everyone now wants to take it over to secure the points for themselves).

thegiantbrain replied the topic: #337673 31 Dec 2022 10:11
There are so many subtle implications of every mechanic in this game. I really hope we see a reprint at some point so I can pick it up for a not insane price.
Read More...