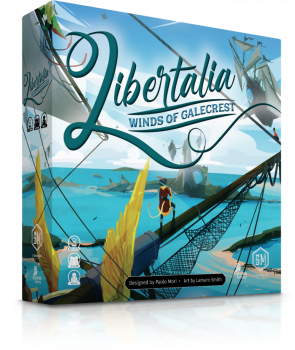 There are certain settings that are recycled time and again in our hobby. Games can take us from the depths of space and dungeons to the heights of cyberpunk offices and fantasy parapets. These settings provide comfort to those who love them, and at times derision as long for more diverse settings.

Originally designed by Paolo Mori, the new design has him revisiting this well regarded title in a new version from Stonemaier games with art by Lamaro Smith. It has been 10 years since the game was released and it has always been a sought after title in the secondhand market. The core game is the same so I’ll just be referring to it as Libertallia throughout this piece with a little discussion about what the new version brings a little later.

Libertallia is a game that revels in its puzzle structure. Each game you and your fellow pirate captains set sail on 3 voyages into the skys of the world. Alighting upon islands floating amongst the clouds, you send a solitary crew member to grab some loot and return to the ship before making sail for the next one. Why you do this as a large fleet and don’t just go your separate ways is never fully rationalised, but without it we wouldn’t have the game we have. I digress.

You don’t just jump on the island, follow the map to the place with an X, dig up treasure and leave. That would be uncouth. There are rules here. Well maybe they are more guidelines. 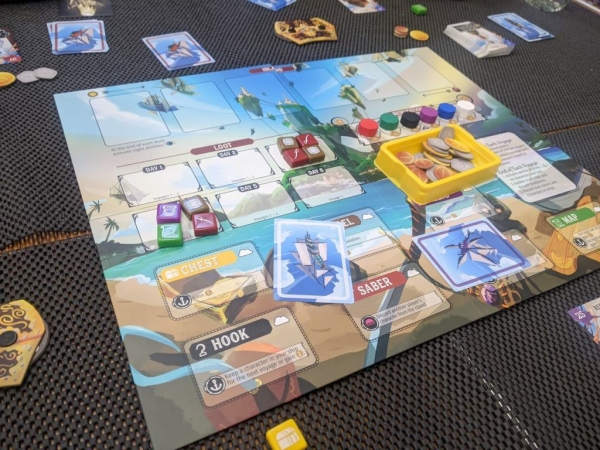 It is a fine looking game

For starters each of you have the same crew, with each member being a card with a rank, a number from 1 - 40, and a set of unique abilities. Each day of the voyage each captain will place one of these crew face down on the island and then reveal them all at once. In ascending order they line up to take treasure from the island like impatient festival ticket buyers.

Before they get to run off with some shiny loot though, they have to survive a day on the island. In ascending order of rank each one activates a day ability if they have one. Maybe they’ll cripple another crew member leaving more loot for the rest of you, reveal themselves to be something else entirely, or simply earn some cash based on where they are in the line.

The day is done and its time to get some loot! As the sun sets, in descending order of rank each crew member gets to take any dusk actions, grab a loot tile from that day of the voyage, and then make their way back to their ship with their new found treasures. Night time brings its own set of actions for any crew on board your ship, and then it's off to bed, ready for another day of piratical shenanigans.

This all sounds pretty straightforward right? Not a lot to it? Recall that I said we all had the same crew at the start of the voyage. We have 6 crew and will play 4 of them over the course of the first trip amongst the islands. This means I know what your abilities are, but I don’t know when you will play those cards.

For instance, during the day phase The Brute will discard the crew to the furthest right of the line, even if that is The Brute itself. Knowing what everyone else starts with, do I commit my Brute during this voyage at all? When I do, how do I guarantee that it doesn’t discard itself, or at least causes trouble for my opponents? 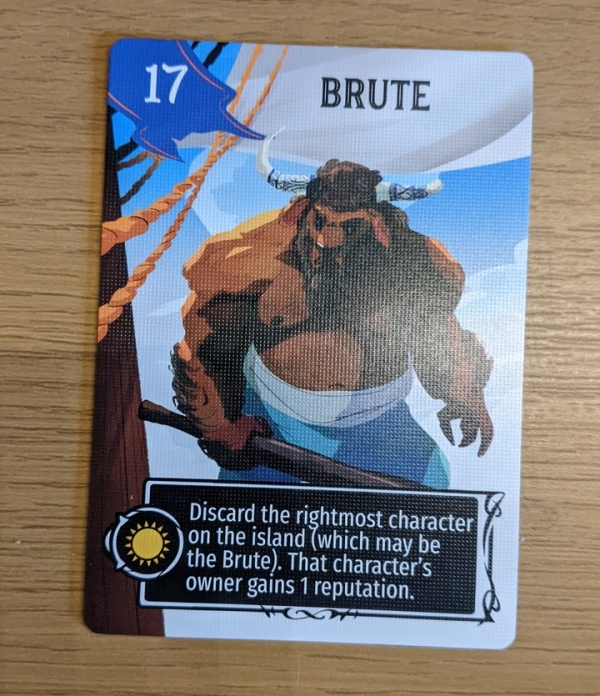 And this is one of the simpler cards to parse!

Each game of Libertallia is full of these Princess Bride-esque puzzles like this, alongside just straight up questions of how to best utilise this weird set of cards in your hand. The puzzle escalates over the course of the 3 voyages. At the end of the first you’ll have 2 cards left and then be given 6 more to take a 5 day voyage. The same 6 as everyone else of course. Now you are playing 5 out of 8 cards in your hand but the makeup of each person's hand is slightly different. Voyage 3 sees you with another 6 and now it's playing 6 out of 9. The puzzle bends and flexes around the choices of others. It does not exist in isolation.

Let’s come back to the Loot. Loot tokens are these gorgeous plastic tiles that clack satisfyingly in the cloth bag, like gold coins in a purse. The make up of a day's loot can be a large part of when you want to grab a tile from that day. If the island is full of relics, negative points, you have to plan carefully to avoid them (though of course there are some crew that love a good relic). Maps need you to collect a set by the end of the voyage, so can you figure out a way to collect enough. What about just stabbing someone further down the line so they don’t get any loot at all? It’s not just about getting loot and running for home, it's about that satisfying feeling of grabbing the right loot while denying the same to your opponents.

One more thing. The beady eyed amongst you will have noticed we’ve talked about ascending and descending order while we also have a limited set of numbers. That means there needs to be some sort of way to determine position when numbers match. Right? Right. The last part of the Libertallia puzzle triptych is reputation. Determined randomly at the start of the game this track determines who goes to the right of who in the queue for loot. Of course there are plenty of ways to manipulate it over the course of the game and it adds another little frisson of decision into your choices at the start of each day. This is an addition from the original game that had no such tie-breaker and it really makes for a fun track to manipulate.

Libertallia presents this heady mix of short term puzzles and long term efficiencies. If you were solving this puzzle in a vacuum with no outside influence it would be relatively simple to tease out the best way to utilise all the tools at your disposal. We aren’t though. Every card someone else plays tells us something about what they have left in their arsenal, what their intentions are, and what their plans for further down the line might be. Or it was a terrible mistake they will curse themselves for.

That is the other side of the Doubloon in Libertalia. Your best laid plans will be ruined by the actions of other players but also quite often by yourself. As the cards are turned over and you start to arrange the pirate queue, you’ll curse other players just as much as yourself for the choices past you just made. That person was an idiot! You’ll come to a day on a voyage where you realise you have nothing but bad choices to make and whose fault is that. That’s right, it’s yours. You fool!

It is a common topic in the hobby about the value of reprints and revisiting older titles. Many games considered classics are hard to obtain, attracting exorbitant prices on the secondary market. Should we reprint these games? Should they just live on in digital platforms like Boardgame Arena? Why not both? Libertallia has been available on Boardgame Arena in its original form for some time. This new version to me is the perfect example of a reprint.

The production is stellar, the rules streamlined, the game made to feel more attractive and approachable. They've provided a 2-player version which has been getting great press, and a solo mode as well (I have played neither at the time of writing). It's a truly generous reprint. In making these changes Stonemaier games has made sure it has lost none of its bite. They have resurrected a wonderful game with respect to the original but without falling into the trap of venerating it so highly they lose sight of getting the game into as many hands as possible. A fine line to walk, to be sure.

September 08, 2022
Rating
4.0
Libertalia: Winds of Galecrest
Libertalia has set sail with a fresh coat of paint. Does it sink like a stone or float on the ocean breeze?
T
thegiantbrain Top 50 Reviewer 36 reviews