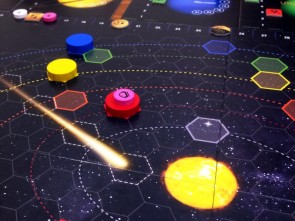 After Earth had been mostly laid to waste, major corporations took charge and colonized much of the solar system. Interplanetary trade was the only source of money and therefore power. Earth's few remaining societies still held a fair amount of political influence, but controlling as many of the independent planetary parliaments as possible was probably even more important. If you timed it right and invested your money wisely, you could gain power in the solar system's ultimate authority, the Plutocratic Council. After all, Earth's political systems had been replaced by a Plutocracy by Claudio Bierig from Doppeldenkspiele.

Plutocracy is set in our solar system, where six planets slowly rotate around the sun. You travel between them to buy and sell resources or gain political influence and the distance you travel equates to time. So as the planets change their positions, the journey time between them will change. It is basically a changing map which you have to take into consideration.

In fact, time plays a very important part in the game. That's no surprise, because the game's subtitle is "Space is Time is Money is Power". So if you can get the timing right, you will get more money, which in turn will give you more power - and ultimately, that's what the game is about. You want to have the most representatives in the Plutocratic Council. They're basically your victory points and the player with the most victory points at the end wins.

There is a time track around the outside of the board and you move your marker along that track, based on the distance you travel at the end of your turn. Whoever is the furthest behind on the track is the current player. It's the same sort of mechanism you may have seen in Tokaido or Namiji for example.

So you can travel a long distance if you really need to, but chances are, you will have to wait quite a while before the other players catch up and it's your turn again. Travelling a shorter distance lets you take your next turn sooner and if you travel less than everyone else, you might even get two or more turns one after the other.

Of course, depending on where you currently are in the solar system and what other players decide to do on their turn, you may have no choice but take a really long journey and sit out the next few turns until everyone else has caught you up on the time track. On the other hand, if you can really plan well ahead, then you can time it just right to make a really short journey and take another turn straight away. 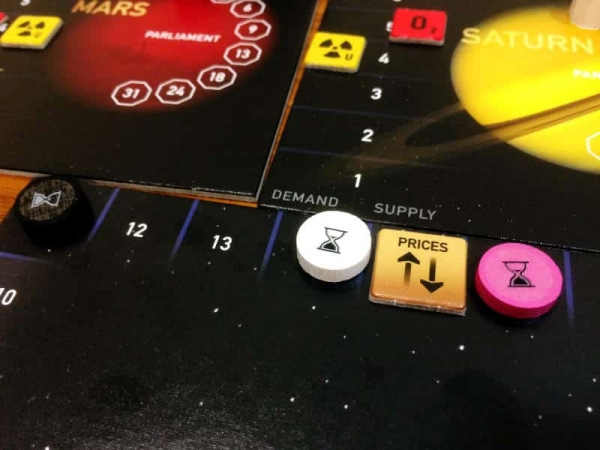 Time is everything in Plutocracy.

Generally speaking, you want to trade elements between the different planets to make a profit, which in turn will allow you to gain political influence, which means more power and which, as we said, means victory points.

In Plutocracy, every planet produces one specific element and needs one other element. The planets' demand and supply create two trading chains: one of two and another of three planets. Buy one element on one planet, travel to the next one in the chain, sell it there for a profit and then buy the other element available on that planet. Every time you buy or sell elements, their prices on that planet change. Quite quickly, prices will have equalized and there is no further profit to be had.

You can also spend your money on seats in the planets' parliaments. The seats increase in price. So the sooner you buy a seat, the cheaper it will be. Anyone who wants to buy another seat on the same planet will have to spend more money, but everyone wants to have the most seats on as many planets as possible, because they mean power.

At certain times during the game, elections are held on every planet. The player with the most seats in a parliament sends one representative to the Plutocratic Council. If there is a tie in a planet's parliament, the player who has the most valuable seat wins the tie. So if you can keep the same number of seats as another player on the same planet, you need to have the more valuable seat to win the tie. 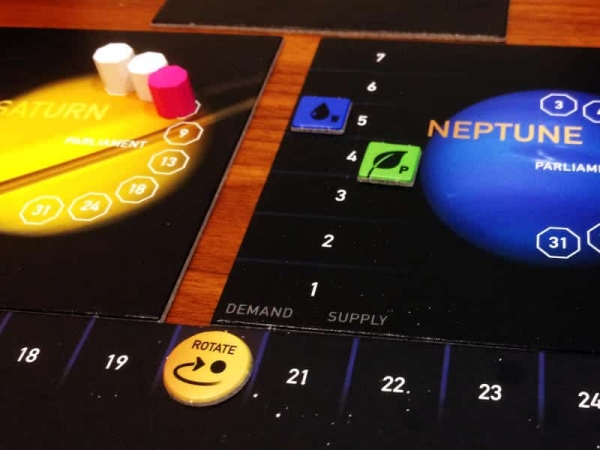 Make sure you control seats in the planetary parliaments.

There is also Earth, which neither produces elements nor requires them. Instead, it is where you can send additional representatives to the Plutocratic Council, if you fulfil certain criteria, such as having one of each element or having a certain amount of money. If you're the first to fulfil that criteria when you get to Earth, you send three representatives. If you're the second player to do this, you send only two.

That's quite a few more representatives than you might get out of the planetary parliament elections. You can even fulfil multiple criteria all at the same time and send two or three representatives for each one. So if you can time it right, you only need to visit Earth once during the game. That means you'll have more time to trade between planets and buy seats in the planets' parliaments.

At certain points during the game a number of different events happen. There are the planetary elections we've already spoken about and there are the planetary rotations, which you need to consider when travelling between planets. The last event is when market prices are adjusted, moving supply and demand in their opposite direction by one step. That's when buying and selling become attractive again.

It does sound like there is a lot happening, but the design is really clean. The time track drives everything: turn order as well as when events happen. It's beautiful to behold. There is never any question whose turn it is and you can pretty much predict when events will occur, because you can gauge how much time the other players will probably use up on their turn.

The player boards have the possible actions listed on them and they're ordered in a specific way. You literally read the list of actions from top to bottom. For each action, you decide if it's something you can actually do and if so, if you want to do it. Most actions can only be carried out in a specific location. As you would expect, you can only buy and sell elements on a planet. It's really obvious and means you don't have to think about what order you want to do things in. 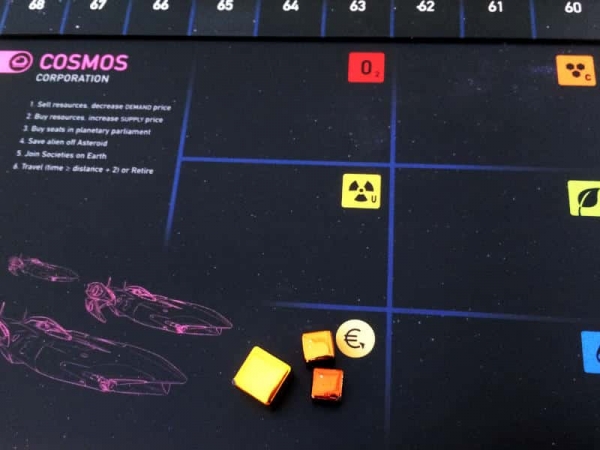 The list of actions on the player board is great and the resource cubes are shiny.

I also love how the gorgeously shiny and metal-looking resource tokens record how much you have of everything. Your player board is divided into six sections: one for the money, the other five for each of the five elements. A bronze cube on the oxygen space represents one oxygen. A silver cube on your money space means you have five Space Euros. It's that simple.

So, overall, the game flows really quickly and smoothly and doesn't take too long to explain. It's all pretty obvious and makes sense.

In a way, that's also my problem with the game. When I first looked at the rulebook and saw Plutocracy's lovely components, I expected a heavier game with more and tougher decisions. It's a pick-up-and-deliver game, but a very limited one. In other games of this type, you have at least two locations to pick up from and at least two to deliver to. In Plutocracy, you can buy each element in only one specific place and can sell it in only one place.

So if someone else does it before me, the prices will be ruined and my profit will have dwindled. Sure, I can do the same to the other player, but everyone ruining everyone else's profits isn't a game. Even if Plutocracy is a game about doing the opposite of what others do, it doesn't mean players have to make tough decisions.

The thing is, the reason why I feel underwhelmed is that I was expecting a heavier game. The publisher explained to me that Plutocracy's focus is on the pick-up-and-deliver element and other than the planetary parliaments and Earth's role in the game, there is nothing else to distract you. It's all about timing. It's about deciding when you spend your money on the planetary parliament or whether it's better to keep the cash to fulfil one of the requirements when you visit Earth. 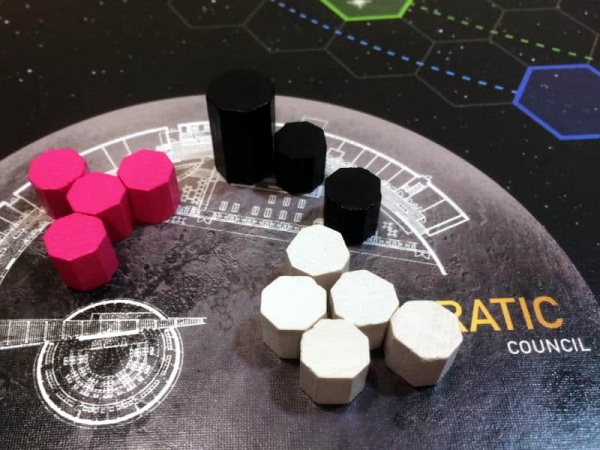 The Plutocratic Council is where the victory points are in Plutocracy.

Even so, it does feel like there is something missing. If all you have to decide is when you should buy, sell or go to Earth, then Plutocracy doesn't deliver enough interest to players. It is a relatively quick game, but you end up making very similar decisions every turn and more often than not you're forced to take a certain action over another, which means there is even less agency in the game.

If I have my ship loaded full of oxygen, but the market price means I am not going to make a profit, I am pretty much forced to sell it at a loss or for zero profit, unless I still have some cash. Then I might be able to buy a seat in the planet's parliament. If instead my ship is empty and I have cash, then I might be forced to travel a long distance to a planet with an element with a profit margin or I might be lucky that the planet is close to me. It's not a real decision though.

So, for me at least, Plutocracy doesn't offer enough interest to want to play it multiple times. I can see how it might be the perfect game for some people though. If you want quite a simple game that plays in about an hour and which has pick-up-and-deliver on a changing map at its core, then Plutocracy is worth checking out.

September 16, 2022
Rating
2.5
Plutocracy
If you want quite a simple game that plays in about an hour and which has pick-up-and-deliver on a changing map at its core, then Plutocracy is worth checking out, but, for me at least, Plutocracy doesn't offer enough interest.
O
oliverkinne Top 50 Reviewer 47 reviews