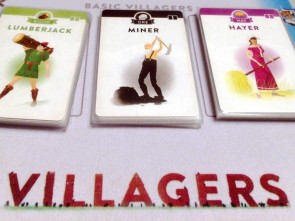 The Great Plague was slowly becoming a thing of the past and you had decided to move into the country and start a new village. You had found the perfect location that was big enough to build new houses, workshops and other structures, while also being close enough to farmable land, a large wooded area and there were indications that coal could be mined nearby. It had everything to support a growing community of craftspeople and labourers. Now all you had to do was find Villagers by Haakon Gaarder from Sinister Fish Games.

The setting of this card drafting and tableau-building game has a hint of history about it and even though the cartoon-style characters on the cards wear clothes that look like they could be from the middle ages, Villagers isn't an educational game. Yet, the setting and the illustrations together really help with the gameplay. You immediately know what your job is. You need to attract people with different skills that work together to create a successful and self-sustaining village.

As you start the game, there isn't a huge amount you can do. Even so, if this is your first game, it can feel a bit overwhelming. You're constantly checking whether the card you're about to draft actually fits into your village. After all, many cards depend on others, creating a sort of mini tree of skills. It reflects how certain trades need others to function: a cartwright needs a wheeler who in turn needs a lumberjack. Additionally, sometimes you have to pay money to another player or the bank for adding certain people to your village. All the information is actually printed on each card, but it can still feel a bit daunting on your first game.

As you get more used to the interdependencies of villagers, the game starts to really flow. You realize that often it's worth drafting a villager early on if they're valuable. Just keep the card and add it to your tableau later in the game. You also realize that sometimes you're better off drafting a card that's highly valuable to another player. You want to stop them from making points, even if the card's not particularly useful for you. So there is a certain element of hate drafting in Villagers, but of course, you don't have to play it that way.

As you grow your village, you will be able to carry out more and more actions. At this point, analysis paralysis can set in. When you have too many options, you can endlessly try to find the combination that gives you the most points. Usually, that's not until much later in the game though.

There is definitely no single route to victory in Villagers, which is why the game can seem so overwhelming at times. You can try to build your village and slowly build your victory point pool or you can invest heavily into scoring points in the last round. You can diversify your village and have many different skills in your tableau or you can focus on one or two skills and grow their trees several levels deep.

It's not even as if the game pushes you in a specific direction. The card market is pretty large and constantly refreshes. Sometimes you have to take a punt and draw a face-down card, but even then you know what skill it represents. Most of the time you can follow your preferred strategy. Even if a card isn't useful straight away, you can keep it until the moment is right to score heavily.

The only thing you do need to keep an eye on are the cards that allow you to take additional draft or build actions. You're trying to increase both, if possible, because the more cards you can draw, the more choice you have. The more cards you can build, the quicker your village will grow. Both are really useful. 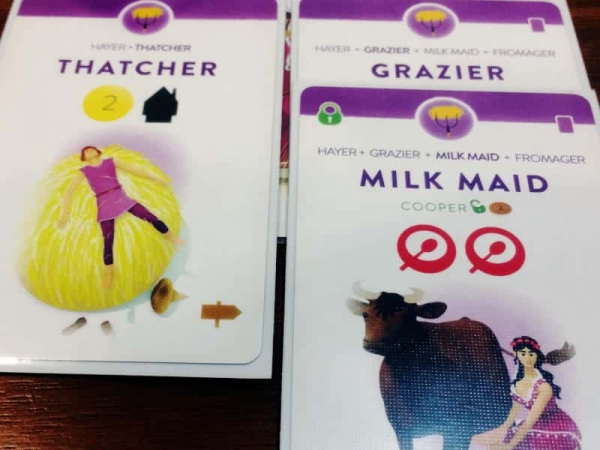 Make sure your village has people in it who allow you to draw and play more cards.

What has always surprised me in Villagers is who ends up winning the game. So often it seemed like a done deal. One player had had a steady income of points throughout the game and was way in the lead. Yet, after the final scoring round, another player scored so heavily that they overtook them and won. It's really hard to predict.

That means even if you're way behind until the end of the game, you're still in with a chance. You may have to shift your strategy and invest in cards that give you more points in the final scoring round, but you can usually make it. If you do pull it off, it feels amazing.

Despite the potential huge point swing at the end, Villagers keeps you engrossed throughout. You can't really switch off and wait for your turn, because you need to see what cards other players have taken. You also need to check if certain cards are in other players' villages, because you don't want to give them points by having to use one of their people. It's definitely not a multi-player solitaire game. Player interaction is going to happen, even though it's up to you if you want it to be positive or negative - or maybe a bit of both. 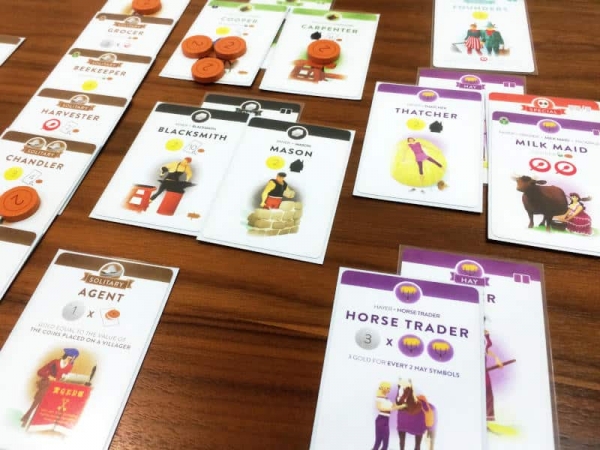 You can really get a lot of points at the end of the game.

The game is pretty easy to learn and you probably just want to explain the basic rules and then start playing. Most things will make more sense when you actually see the cards in front of you and realize that you can't place them, because of the skill tree for example.

Saying that, the rulebook isn't necessarily the best. It's all there, but we did find we had to refer to it several times every time we played Villagers. I think one of the expansions has a summary on the back that's very helpful, but even it does not mention everything.

At the same time, everyone gets a "village square" card, which also contains a few reminders and the villager cards themselves have pretty clear symbols on them and show the skill tree. So a lot of the gameplay is there right in front of you.

As usual, the more you play it, the quicker you will get.

I certainly always look forward to playing Villagers again. Building your little village is really satisfying and has a pleasant whiff of engine-building about it. The other players' villages do feel like they're geographically nearby. When you have to pay another player for playing one of your own cards, it's as if you sent an apprentice to their village for training and now they return home and apply their newly learned skills to your own village. It's all really very pleasant indeed.

Kidding! Everybody is smiling on the cards, so clearly they're having a good time contributing to the local economy. Milk maids gonna milk.

And fair enough. Not that anyone cares, but just after the first big blast of the plague in the 1340s there were about 20% of all French villages (and other parts of the world too though I don't know the percentage for them) that simply disappeared because they lost key people necessary to make any town a going concern. Blacksmiths in particular, which served the purpose of engineer and stone masons as well, became very valuable individuals that could not be done without.

The result is abandoned villages you can still stumble across in the woods of France today that had what remained of their population simply walk away when they became unviable.

Villagers is really not my kind of game. It seems to do what it does well, which is provide a very thin structure where the rules get filled in as cards come out onto the table. There's a solid hierarchy. The result is that the game is a bit different every time you play it, based on the combination of cards that are out. Given my less than ideal eyesight for this kind of game I find I'm simply not willing to put the effort in to play well. I don't want to be a bother looking at everything over and over again, because the game state just doesn't seem to sink in to my brain. I can open my vision and look at 120 chits on a map and identify where my attention should be, but in games like this where each detail matters it seems I need to reassess everything every time it's my turn. Don't know why.

One of my buddies introduced this and he clearly loves it. I think it's a pretty clear example of our different taste in games. He asked me what I thought and I told him it works well, but it's just not my kind of play.