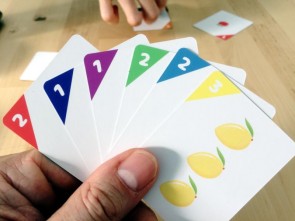 Changing your plumage from pure white to a rainbow of colours wasn't easy. It took time and patience. It was the fruit from the rainbow tree that contained the necessary pigment. Unfortunately, the fruit wasn't always in season and when it was, other birds were quick to eat it before I had a chance to get to it. It was a race, be it a slow and thoughtful one, to become Aves by Shi Chen from Play With Us Design.

I was very happy when this Taiwanese publisher contacted me and offered me review copies. As a publisher of small box games, their product range really appealed to me straight away and I had always wanted to try games from Taiwan. So their offer to send me a couple of games was snapped up straight away.

Aves is basically a deck of 42 cards in seven differently coloured suits, with cards numbered 1 to 6 in each suit. The aim is simple: end your turn with one card from each suit. Of course, it's not actually that easy to achieve. Everyone starts with three cards and there is a hand limit of seven cards. So you end up having to discard cards at some point, which is a tougher decision than you'd think. You don't just want to discard cards of whatever colour you have multiples of. You have to consider your options.

The reason for this is a clever little card drafting mechanism in Aves.

There are seven face-up cards in the middle of the table arranged in a circle. On your turn, you play one of your cards in between two cards in the circle. If the number on the card you played is equal to the difference between the numbers of the cards on either side, you take those two cards. The suit doesn't matter here. So, if you play a 2 between a 4 and a 6, you take the 4 and the 6 and your 2 stays in the circle. 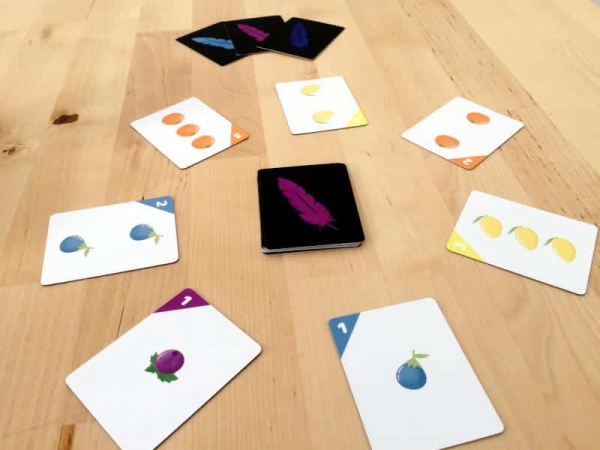 The circle of seven cards around the draw deck in Aves.

The reason that you take it from the bottom of the deck is that the back of every card shows the colour of the card's suit. That is quite important. Everyone keeps their cards in their hand, but everyone can still see what colours everyone else has. That way you can gauge if someone is close to completing their set of seven differently coloured cards.

So there is an element of hate drafting. Mind you, I don't think it's hate drafting as such. After all, if you can see that another player needs one or two specific colours to win on their turn, it's obvious that you ensure those colours aren't available to them. It's more about not losing than about being mean to another player.

However, even if you manage to stop someone else from getting the last colour they need from the circle, they can still go for a random pick from the bottom of the deck and they may still win despite your efforts.

The rest of the time, there isn't enough information for you to actively stop others from getting what they need. You're much more focussed on trying to grow your hand and the selection of colours of the cards you have and what's available in the middle.

Aves is really quick to learn and play. Sure, you have to do a little bit of arithmetic to calculate the difference, but that's not too taxing. You really don't have to think too hard on your turn, as most of the time you can quickly decide which card is the best to play in the given situation.

The game usually ends after about 15-20 minutes when someone has gotten their set of seven different colours, but it can also go all the way until the deck is empty and then the player who has more different colours wins.

There is also another variant which adds in crow cards, which have a value of 0, but if you have them in your hand, you can't win and you can only play them when there are two cards in the circle with the same number. It adds another little interest to Aves. 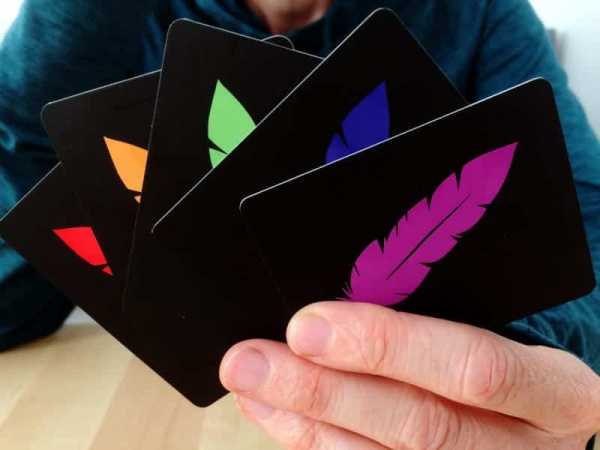 The back of the cards in Aves show the colour suit.

The More, The Merrier

Overall I would say the game is better with more players. When I played it with my wife, it seems that there is a first-player advantage, which makes sense, because if everyone makes optimal moves, whoever started the game will be the first to finish their rainbow of seven colours.

We actively tried different strategies to see if that first-player advantage could be avoided, but we were unable to find something that worked. Maybe we just didn't try hard enough, but I would recommend you play Aves with at least two other people. I reckon three-player games are a lot more fun and the game gets better, the more of you there are.

The game is just a deck of cards, so it's really easy to put in your pocket. The cards are quite tough and should survive a lot of play. Aves is the perfect light little game for a short break or maybe to pass the time on the bus, train or plane.

October 07, 2022
Rating
2.5
Aves
Aves is the perfect light little game for a short break or maybe to pass the time on the bus, train or plane.
O
oliverkinne Top 50 Reviewer 47 reviews