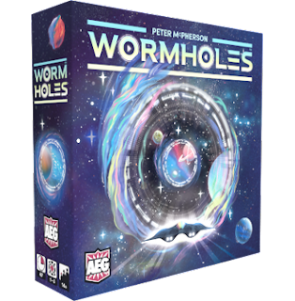 There’s a reasonable number of things going on in Wormholes from AEG. When I saw the game was designed by Peter McPherson of Tiny Towns fame, I kind of mistakenly thought that it might just be a spiritual successor, a kind of spatial spatial puzzle set in space.

There’s a reasonable number of things going on in Wormholes from AEG. When I saw the game was designed by Peter McPherson of Tiny Towns fame, I kind of mistakenly thought that it might just be a spiritual successor, a kind of spatial spatial puzzle set in space. You get the idea. These things kind of concern me most of the time, as they can often end up looking like just a reskinned mechanical expansion. But Peter is a smart man and I was wrong to assume that he would take such a simple route. This to me could be seen as his second attempt to keep me impressed and continue to make my eyes light up when I know I’m getting the chance to play one of his wares.

Wormholes is like one of those vast videogame RPGs, without actually being an huge videogame RPG. It goes from being the beginning of a videogame RPG where you are trekking everywhere on foot, to being one of those RPGs where you have have vast control of the map and can zip about places to your hearts content, jumping from wormhole to wormhole, visiting planets and ferrying passengers. Wormholes is like a vast videogame RPG cruise ship of a game except you aren’t fighting against other people and meeting alien races. Wormholes is a pick up and deliver videogame space journey RPG that is really nothing like anything that I’ve said in the last paragraph so I’m going home for a sit down. Goodness sakes.

So you’re going to spend your time placing numbered wormholes that then connect space together so you can travel to different planets and either pick up or drop off passengers. You’ll be gaining points when you do that, which is lovely, but what you are really trying to do is to set out your navigation points with your wormholes to make the zipping stuff that little bit quicker. You’ll have energy tokens that you can use to pay for moving from one space to another, but if you’re lucky you’ll maybe hit a special space in space which allows free movement, or zips you off in a straight line until you don’t want to. If you want to be really cheeky you can use other people’s wormholes to get around the place at the cost of giving the other player a free point from the supply. In all honest it gets to the point where giving points in order to all you to deliver a wad of passengers is a worthwhile sacrifice.

You gain passengers by visiting planets which can give you random cards or you can jet to the space station and take you pick of the passengers that you want to be delivering to. It works like a default list of choice and it removes the randomness that you get from picking from planets but punishes you by potentially increasing the travel that you have to do in order to get back to the main Space Station.

Wormholes ultimately is about the control of fast travel and limiting the use of energy to get about the galaxy to deliver those passengers and reaches it’s crescendo at different points depending on the number of players. Even with a smaller map, the two player game can often feel like you are two ships passing in the night until you get to the point where you’ve laid enough wormholes on both sides to bring about the fastest travels. At higher player levels, the area of play expands, but there is more chance of meeting and interaction. Wormholes is always going to fair better in situations where the available tiles are taken up as quickly as possible and players are having to weight up sacrificing the points they are giving up for the pay off from passenger delight.

There’s a lot of thought gone into how the game should work based on player count, so don’t let that put you off. The main player boards are double sided to offer a slightly different challenge than if you are playing with a lower player count. The tile powers add potential extra strategy to the game as you navigate around the system trying to work out efficiencies. I think you need to be playing with a group who want to get into each others faces and force them to make errors in how they are planning their routes. The energy and card reminders are cute additions to the game to keep you correct, the exploration stack is a wonderful way to track the different rounds as they play out and the planets are discovered. The game looks spacey and compliments and works well with the theme

I felt there’s quite a lot of little moving parts that you need to keep a eye on in order to get the best out of the game, and it wasn’t unusual to have the rulebook sitting not too far away just to remind yourself of how the various parts of the bigger machine interacted with each other. There a lack of immediate ‘Oh I get It’ that was present in Tiny Towns, but to compare the two probably breaks some hideous rule about comparing completely different gaming mechanics from the same designer. There’s more depth than I expected and it’s a game that demands and ultimately benefits hugely from player interaction as quickly as it can be facilitated. It’s pick up and delivery Jim, but not as we know it..

You can find out more about Wormholes by visiting https://www.alderac.com/wormholes/