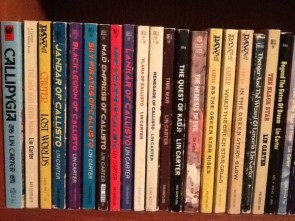 I have always loved Science Fiction. Maybe it all started with Saturday Morning cartoons, but I disappeared into novels and short stories at a very young age.  When I was a kid in grade school my mother would force me outside on nice days for exercise and “fresh air”, but most of the time I would bring my current science fiction escape and sit beneath a tree in the backyard, lost between the pages.  At this point in my life I have collected quite an impressive library full of old favorites and new acquisitions waiting to be devoured.  I thought it would be fun to share my library with my F:ATie friends.

Lin Carter is for me a guilty pleasure.  “Pleasure” because I very much enjoy reading his books, but “guilty” because I know I really shouldn’t.  Why not?  Because they are not “art”?  No, that doesn’t quite capture it.  Because they are “derivative” of other authors work?  Possibly, but it is done intentionally. Carter is very good at taking concepts from older established authors and elaborating on them.  This should not be a surprise since he made his fame coauthoring many Conan stories with L. Sprague de Camp.  Carter takes older ideas and, while not quite making them his own, he does bring them into his own time.  Since Carter wrote most of his novels in the late 60’s and 70’s this means he takes concepts from Burroughs, Howard, Verne and others and brings them into a world of psychedelic sensibilities. I am tempted to describe his stories as tainted by LSD, but I remember reading an interview years ago where Carter claimed the only drugs he ever used were alcohol and nicotine.  Perhaps.  Nonetheless he brings us stories of telepathic Mind Wizards living on Jupiter’s moon and fanciful flights riding on the back of a giant firefly from a planet orbiting a distant green star.

I have never read any of Carter’s Conan stories because I am simply too much of a Robert E. Howard fan to ever go down that road.  I have however, read a number of his more “original” stories and loved many of them.  When I was a teen I read the five books of THE GREEN STAR series (starting with UNDER THE GREEN STAR).  A crippled man learns to transport his soul/mind to a distant planet orbiting a strange green star and has fantastically psychedelic adventures.  I read the first book because I met Lin Carter at a Sci-Fi convention in Manhattan, and he was just an incredibly nice guy who took the time to talk to fans, even adolescent geeks. Also, have you seen the covers of these books?  The art is just beautiful. Ever since then I was hooked.

Over the years I’ve enjoyed a number of Carter’s science fiction stories, most notably STAR ROUGE, OUTWORLDER, and THE MAN WHO LOVED MARS.  The most fun I ever had with Carter though is with his outlandish stories in the CALLISTO series.  Starting with JANDAR OF CALLISTO this eight book series chronicles the adventures of a downed helicopter pilot in Vietnam who finds an ancient lost city, which just happens to contain a portal that leads to Callisto, one of the moons of Jupiter.  Here our hero trips through many Burroughs like adventures which include a beautiful princess in distress, Sky Pirates in zeppelins, and in one of the books Lin Carter himself becomes a character and enjoys a bit of adventuring as well.  All in all it is a fantastically fun romp.  Not literature, just fun.   If you can enjoy B-movies and comic books, you can probably find some guilty pleasure in Lin Carter.

Other opinions?  Any other Carter fans?  I would love to know!

SuperflyTNT wrote: You say "tainted with LSD", and I'm thinking "out there, like Flow My Tears, The Policeman Said". Is this right, or is it just 70's counterculture type shit?

No, no, nothing like that. PKD had a way of bending your mind with his words. He could do that because he was a fantastic writer and had a remarkable facility with language. Carter depends more on bringing absurd images into what is really just an adventure story. I don't think "counterculture" was his intention, more like he was giving the people what he thought they wanted.

trif replied the topic: #198809 04 Mar 2015 18:27
I had a couple of the DAW SF Gondwane books = The ___ of World's End series, and may be one of the Thongor novels. He was enjoyable for what he did and is probably due for a rediscovery, especially by Hollywood. Ah, if only "John Carter" hadn't been a massive flop, Lin Carter's back catalogue would be strip-mined.

trif replied the topic: #198810 04 Mar 2015 18:32
I'd forgotten that Carter had written a biography of Lovecraft that was my introduction to his work. So he was one of the most important writers of my youth.

trif wrote: I had a couple of the DAW SF Gondwane books = The ___ of World's End series, and may be one of the Thongor novels. He was enjoyable for what he did and is probably due for a rediscovery, especially by Hollywood. Ah, if only "John Carter" hadn't been a massive flop, Lin Carter's back catalogue would be strip-mined.

Damn, I forgot about the "Worlds End" stuff. Not on my bookshelf anymore because they were all destroyed in the fire we had a couple of years ago. In those books Carter seems to be chanelling some Jack Vance "Dying Earth" stuff, and I remember enjoying them immensly. I have never read any of the "Thongor" books.

You are absolutely right that many of Carter's books could easily be made into interesting movies. Boy, THAT would be a trip!

SuperflyPete replied the topic: #198946 06 Mar 2015 09:57
With a middle name like Vrooman, you know the guy was doing massive amounts of drugs. It's not so much a middle name as a description LMAO

I've been reading about him this morning and it appears that he didn't just do a biography, he made a great many stories that use his mythos. There's a collection:
en.wikipedia.org/wiki/The_Xothic_Legend_...iction_of_Lin_Carter

Goodreads rates it a 3.6/5 with the one review stating...

Oct 22, 2014Christopher Sutch rated it 3 of 5 stars · review of another edition
While there are some entertaining Mythos tales in this collection, a little Lin Carter goes a long way (which is to say that I appreciate Carter's skills as an editor a bit more than I do his skills as a writer). Part of my problem with Carter's ideas is the sheer overkill he inflicts on Lovecraft's (and Derleth's) original ideas, the overwhelming need Carter felt to systematize everything so that all the contradictions would be reconciled (even when it was those very contradictions that have made the Mythos such a fertile ground for writers' creativity for generations). Robert Price's editorial comments, like other books in this series, are insightful, and the final tale (by Price), a pastiche of Carter's take on Lovecraft, is both a funny and fitting tribute to Carter's work. (less)

I'm not sure I'd like to read this, but I have this thing about Lovecraft...anyone who wrote after him is just really making FanFic. Not necessarily bad, but still not from the horse's mouth, so to speak. I make exceptions to this, such as REHoward's Black Stone, and Cairn, but not many. It's just too hard to replicate the writing style and anything else is just kind of not worth reading, in my opinion.

I'm really interested in the Thongor stuff, though. Might pick one up when my Amazon points re-up. Right now the only thing I've got earmarked for that is the Wool series. There's an Omnibus (1-5) that's like 20$ and I'm thinking that's going to be my next journey into a paper world.

engineer Al replied the topic: #199007 06 Mar 2015 22:59
Hilarious. I completely agree with you about that ridiculous middle name. I had pretty much the same thought. I also agree with you about the Lovecraftian stuff. As I stated before I never read Carter's Conan stories and it is for pretty much the exact same reason. I'm interested in why you are choosing the Thongor books as a place to start. Is it because they were his first books? I have the first novel in the series on my bookshelf, but none of the others. I would love a good reason to go book hunting!

SuperflyPete replied the topic: #199020 07 Mar 2015 13:32
Primarily because its his earliest works, and I find that those are the most original thoughts, untainted by being successful. Seems to me that the earliest are generally the best, and really let the writer's voice ring truest.
Read More...