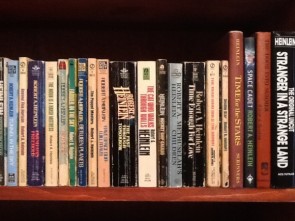 Robert Heinlein is the greatest writer of Science Fiction that ever lived.

I’m not claiming that he’s “Science Fiction’s Greatest Writer.”  Obviously there have been men and women with a greater grasp of the art of written language, with a greater fluency or more artful prose.  Names come to mind like Bester, Dick, Vance and Sturgeon, to name just a few.  What I AM saying is that no one writes a better Science Fiction story than Robert Heinlein.  In my mind, Heinlein’s works are the very definition of what Science Fiction is at its best.

Now I know there are many of you thinking to yourselves “I read STRANGER IN A STRANGE LAND, I read STARSHIP TROOPERS and they just weren’t that great.”  And you are right.  Why these are the books that have become associated so strongly with Heinlein’s name is quite beyond me.  They are not his greatest works.  STARSHIP TROOPERS is revered, it seems, because it marks the creation of the “Space Marine”.  This is an incredibly interesting idea, but a dated one that can have little impact on a modern reader who has already been bombarded with the concept for decades.  The story itself is. . . lackluster.  The characters are unmemorable.  The battle scenes are interesting as I remember, but that was about it.  STRANGER IN A STRANGE LAND was groundbreaking at its time, but the social commentary of this book written in the 1960’s is again “old news” to the modern reader.  I do love the characters in this one, and the story is interesting, but too much of it is just no longer relevant.  Another strange thing about this novel is the way it was edited.  Apparently the book was such a deluge of pages in its original form that Heinlein was asked by the publisher to remove sixty thousand words.  Reluctant to cut any of the passages he had written, Heinlein painstakingly went through the pages and pulled out sixty thousand words without changing the meaning of one sentence.  This to me explains why this book does not contain the “fire” of his better works.  The message remains but the “passion” was removed.  Some time ago the complete version of the book was released, but I have to admit I haven’t read it yet. It’s on my bookshelf.  I’m “saving” it.

So where do we turn to read something great by Robert Heinlein?  For me it is the short stories that he wrote in the 1940’s and 1950’s.  The stories that have become known as Heinlein’s “Future History” and outline man’s first forays into the solar system, occurring between the 21st and 24th centuries.  These are amazing stories that convey the excitement for space travel that existed during the time in which they were written.  They contain a positive outlook of the future as well as a belief in the power and the good of mankind that could only exist in the early days of Science Fiction.  They are also packed with action, tension and fantastic ideas.  Most of these stories are collected in the enormous THE PAST THROUGH TOMORROW.  If you are looking for a thousand pages of pure, unadulterated “what Science Fiction should be”, this is the place to start.  Beyond just a romantic homage to what the future can bring, these stories offer challenging thoughts on government, religion, social norms, and what it means to be a human being.  Read this book.  Seriously.  Heinlein continues his “Future History” a thousand years later in ORPHANS OF THE SKY and then a thousand years after that in TIME ENOUGH FOR LOVE.  Both are also great.

The next stop on our journey through Heinlein should certainly be THE MOON IS A HARSH MISTRESS. This is perhaps Heinlein’s most beautifully written novel, taking place during a civil war in which the lunar colonies are trying to separate from Earth.  This of course sets up Heinlein for comments on war and government, but the story also touches on the morals of self-aware artificial intelligence.  His predictions around the type of men who will one day spend their lives working with computers are eerily on target.  This is an absolutely splendid novel.

I should probably mention the “Juveniles” as these are some of his best known works.  Titles like ROCKET SHIP GALILEO, HAVE SPACESUIT, WILL TRAVEL, and yes of course SPACE CADET are among almost a dozen works that Heinlein created for young adults.  These novels are all fun, but nothing astounding.  They are like comic books, or b-movies that take place in space.  Of course I LOVE comic books and b-movies more than just about anything, so I do love the “juveniles”, but they are a distraction.  Good for a day at the beach, they will not hold your thoughts or bring new insights.

Heinlein wrote prolifically and lived a long life.  While I am not particularly fond of his later works, there is still a plethora of engaging, exciting and thought provoking work to be plundered.  GLORY ROAD is an unexpectedly fun romp in the world of sword & sorcery.  FARNHAM’S FREEHOLD is a novel that amazed me.  Just when you think you know what it’s about, it becomes something completely different.  I am still astounded by the strong emotional impact this novel had on me.  Man, I just finished a collection called ASSIGNMENT IN ETERNITY that contains a handful of novellas and short stories from the 1940’s that I enjoyed immensely.  The list goes on and on.  Until, like me, you find you have devoured all of these delicious tales, and end up clinging tragically to the hope that sixty thousand more words to STRANGER IN A STRANGE LAND will be worth the wait. . .

Stranger in a Strange Land got adopted by the hippie generation, something that propelled it into mainstream consciousness and haunted Heinlein, as he was a very conservative individual politically. But the result was that it has a much larger readership than his other novels. It transcended the genre.

I still think about Friday on occasion. A couple of concepts in that one (not one of his best sellers) hit me differently.

One of my English teachers in college knew him personally and would tell stories in class. "Bobby Heinlein"

KingPut wrote: My fav is Heinlein.

Pete, I've known you most of my life now, and I had no idea! What are your Heinlein favorites?

SuperflyPete replied the topic: #274120 26 May 2018 18:29
I’m also in agreement. He’s prolific, which is his greatest achievement. Only Dick and Clarke rivals him as a contemporary.

The Moon is a Harsh Mistress are literally one of the most excellent works of science fiction as a corollary of the modern (at the time) world.

I ~like~ Burroughs' John Carter series better, and I like Dune better than any one piece that Heinlein ever wrote, but Burroughs is a pulpy guilty pleasure and Dune is a Tolkienesque masterwork that has been diluted in its greatness by its sequels and inability of the Howard estate to stop milking the cow.

But Heinlein...he had timely, interesting, and digestible works which spoke to scholars and fans alike, telling stories while making a statement.

cdennett replied the topic: #274149 27 May 2018 22:56
I read a bunch of Heinlein in high school then put him down for a long time, but later picked him up (probably 10ish years ago) to fill in some of the gaps (namely The Moon is a Harsh Mistress, which this thread has me wanting to read again). My favorite book of his is probably still JOB: A Comedy of Justice. In High School English I actually wrote a comparison book analysis with it and a play named "JB" (which the teacher suggested after denying me using the actual book of Job form the Bible)...probably one of my favorite writing assignments.

Threads like these make me sad that I barely read anymore...I basically don't do it except when traveling. I should break that habit.

Southernman wrote: I'm an Asimov lad - how to you compare the two Al ?

Actually, I think there are many similarities between the two. Both are born out of the pulps and therefore share a certain attitude toward both science and storytelling. Also both tend to lean toward the "hard" science side of "science fiction". I think Asimov presents ideas that are in some ways more "fantastic", while Heinlein is better at creating characters and his stories are more character driven.

cdennett wrote: My favorite book of his is probably still JOB: A Comedy of Justice.

REALLY? I never read this one because I hated FRIDAY and THE CAT WHO WALKS THROUGH WALLS which were written at around the same time. If you are saying this is good I will be VERY EXCITED. Pretty sure I already have it in the library. . .

cdennett wrote: My favorite book of his is probably still JOB: A Comedy of Justice.

REALLY? I never read this one because I hated FRIDAY and THE CAT WHO WALKS THROUGH WALLS which were written at around the same time. If you are saying this is good I will be VERY EXCITED. Pretty sure I already have it in the library. . .

Well, let's be clear, I enjoyed the subject matter and story. It resonates with my personal beliefs and I like the way it picks at the hypocrisy and logical dissonance surrounding religion.

But I also thought The Cat Who Walks Through Walls was alright, though not terribly memorable, so perhaps my opinion should be taken with a grain of salt.

Josh Look replied the topic: #274184 28 May 2018 12:52
Gosh, Al, thank you for bringing this wonderful column back. However, I want 25 cents every time someone uses my trademark “Listen” to preface their argument.

Never has a writer gotten me so jazzed about the genre just as much as they have frustrated me like Heinlein has. Perhaps Harlan Ellison, but I’ve read more Heinlein. It’s not that books like STARSHIP TROOPERS and THE MOON IS A HARSH MISTRESS fell flat for me, but rather I completely disagreed with their ideas. And yet I’m still carrying those books around in my headspace years after I’ve read them, while so many others have left me with nothing more than “I liked that” or “I didn’t like that.” They’re far from bad books, especially in the case of TMIAHM, I just completely disagree with their world views. I’ve heard some people say he was doing parody or sarcasm in Starship Troopers, but that’s not at all the case. I think it was in the introduction to THE FOREVER WAR that he was serious about that stuff and Haldeman wrote his book in part as an answer, saying, “No, Heinlein, you’re wrong.” Heinlein is often like the awkaward uncle who comes to family events who makes everyone uncomfortable but you keep him around because you want to hear what he has to say next.

And yet I *LOVE* so much of his stuff. THE MOON IS A HARSH MISTRESS is a masterpiece. THE PAST THROUGH TOMORROW is absolutely wonderful. If there’s one book anyone should pick up by him, it’s that one. HAVE SPACE SUIT WILL TRAVEL is a blast. It may not be his best, but I had a good time with GLORY ROAD.

The greatest? Yeah, maybe. Aside from Asimov, I don’t know who else I’d put in the running.

Josh Look wrote: However, I want 25 cents every time someone uses my trademark “Listen” to preface their argument.