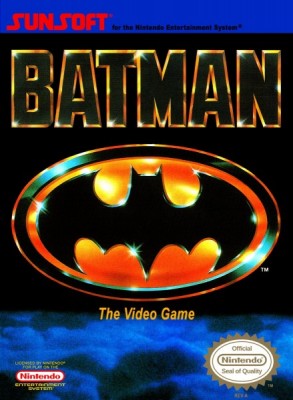 Have you ever danced with the devil in the pale 8-bit moonlight?

Yeah, we know, movie games suck.  Ghostbusters?  Home Alone?  Hudson Hawk?  Seriously, Hudson Hawk...you know, for the kids.  Some of the worst that video games have to offer can be found in movie tie-ins.  It's a punchline these days, so much so that you don't really see many movie games anymore, but these things ran rampant in all their unfinished, hardly working glory for years.  Not all movie games are bad however.  They always seem to take you by surprise.  Batman by Sunsoft is certainly regarded as being a good game, but I'd go as far as to call it a masterpiece and one of the best games the NES had to offer.

Say what you will about Tim Burton's mega-hit blockbuster that this game is based on, it doesn't matter (for the record, the word I use for it is "formative").  You remember that part where Batman fights Firefly?  Or the part where he gets attacked by a giant super computer that fires lasers?  Yeah, me neither.  Aside from a few quick cutscenes and the last level taking place in a cathedral, ending with a fight with the Joker, this game has nothing to do with the movie.  The game really is all the better for the deviations it makes, most notably with the soundtrack.  A chiptune rendition of the Danny Elfman score could have been cool, but what we got in it's place is truly stellar.

The thing that Batman is probably most remembered for is how brutally difficult it is.  By the time you hit level 3 you'll be wishing that there were a few new curse words because you'll have worn out all your old favorites by that point.  Yes, the game is HARD, but this is also where the game forces you to recognize what makes it so great.  First, the jumping mechanics.  You have full control over the Caped Crusader's jumps in this game, more so that what is initially apparent.  It's clear that this was an intentional part of the design because you'll be called upon to put it into play time and time again until you perfect it.  Side scrolling platformers were a dime a dozen on the NES, and as established by a certain plumber in a red cap, jumping is the core mechanic of these games.  Sunsoft made damned sure their game did it better than anyone else's and they utilized it to the fullest capacity in the level design.

For as solid as the jump mechanics were for Batman, what the game comes down to is patterns.  This game is patterns from start to finish.  Every enemy, every wall jump, every boss fight has a pattern and rhythm to it.  Learning those patterns and rhythms is necessary to progress, as is the case many great games from the NES era.  Knowing a few tricks here and there will certainly help, of which Batman has plenty to discover, but learning these patterns has been one of the most satisfying experiences I've had with any game of any era.  It was one of the first games I revisited when I got into retro gaming and while it was frustrating, it was a nice contrast to modern game design, which often rewards time spent rather than skill (Dark Souls not withstanding).  That's not to say Batman doesn't reward time spent, the difference is that you'll walk away feeling like you learned something about how to be good at if if you were paying attention.

SebastianBludd replied the topic: #227710 18 May 2016 15:14
Batman was made by Sunsoft so it has the same flaws as other Sunsoft titles on the NES: it gets punishingly difficult really quickly and there aren't any continues, restarting at the beginning of the level or passwords, when you're out of lives you have to start the entire game over. Other Sunsoft games that fit that description are Fester's Quest (which is the only game I've ever played where, in addition to weapon upgrades, enemies drop weapon downgrades(!)), Journey to Silius, Blaster Master and Gremlins 2. Other NES games were guilty of this (Abbadox, the first TMNT game, etc.) and it was a quick and easy method for making otherwise short games take longer to complete.

I might try to finish Batman some day but only with an emulator so I can save between levels. I don't have the time for that brand of punitive horseshit anymore. Castlevania had it right. As hard as it could be, you still always started at the beginning of the level once you lost all your lives.

Sevej replied the topic: #227739 18 May 2016 20:15
My memory about this one is how good it's looking with very limited color palette. It's using black spaces so damn good, it feels so batman. And leaping off walls? Batman! It's actually slow enough to both feel methodical and batman-like.

Oh, okay, that's not so bad, then. I haven't played it in years (obviously...). I love watching the Batman speed runs - both tool assisted and Awesome Games Done Quick - and the music is ridiculously good, I just never owned it so it's one I never got good at.

Glad to see a few folks into retro game reviews on here. I want to do one a month, so there'll be more to come.

I think Crystalis is great! Definitely one of the underdogs of the NES. I never had it as a kid, but I did play it on an emulator years ago and I picked a physical cartridge of it a few months back.

My retro game collection all over the place. There's not much I'm not exploring (except for JRPGs because I by and large can't stand them, especially older grindy ones). Games I can score-chase with are especially up my alley.

Egg Shen replied the topic: #227777 19 May 2016 10:49
Sunsoft games on the NES are known for a their excellent controls, high level of difficultly, amazing music, and nice level of polish. As a third party developer on the NES they released some awesome stuff. Batman is probably their best effort though.

Games back then would flat out copy other popular games in hopes of matching their success. While this is still a problem in the modern era it was practically an epidemic back in the 8 bit days. Batman is essentially Sunsoft's take on Tecmo's Ninja Gaiden. The main influence being the wall jumping mechanics. In Batman the wall jumping is paramount to your success. If you can't master that wall jump there are parts towards the end you simply won't be able to get past. The wall jump still makes it feel like a Batman game though. It adds this extra layer to the platforming and it feels right. Honestly, I think this game is better than Ninja Gaiden. Ninja Gaiden's last level is so brutal and unfair with it's constantly respawning enemies and upon dying it forces you to replay MULTIPLE stages. Batman does have unlimited continues and if you chip away at it you can at least keep making progress.

Also, that fucking music is SO GOOD. Modern videogames can't touch the NES/SNES/GEN era of music. Speaking of the Genesis...Sunsoft ported this game to that console. It follows the movie more and is MUCH easier. This version they seemed to have copied another ninja game...Shinobi. It's a solid game, but I think the NES version is more of a classic.

Gimmick! is also one of the NES' best platformers, I really recommend it.
Read More...