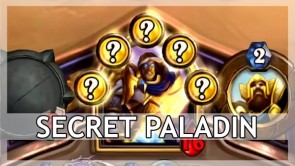 Despite obvious Witchwood encouragement, Secret Paladin is still not a thing.

Most of the time, Team 5's design philosophy isn't to hit people over the head with deckbuilding suggestions. Unless they've released something obvious like the Un'Goro Quests, there haven't been too many instances where a card has been released that essentially screamed: Play this deck! Most of the time, it's fairly obvious that new cards will work well in this or that archetype. An exception to this general approach appeared in Witchwood in the form of Bellringer Sentry. Secret Paladin as a deck carries a bad reputation from The Grand Tournament. While that set is often perceived as underpowered and generally irrelevant to the meta in which it appeared, one of the exceptions was Mysterious Challenger, which essentially created the concept of Secret Paladin almost by itself and which terrorized the game for a few months (a frequent image was the "Christmas tree" above) and solidified a couple phenomena in Hearthstone.

The first is Team 5's overwhelming reluctance to act swiftly on basically any card that seems overpowered. Their much-preferred approach is to let the meta sort itself out and, even if a card does seem to have a dominating presence (their regular claim is that their always-hidden numbers say that the dominant conversation about particular cards is overblown, since they're not as good as the widespread perception of them), they'd prefer to deal with it by introducing counters in the upcoming sets, rather than directly affecting the "value" of players' collections. We'll get into that another time, since that conversation can go on for quite a while (and has.) But Mysterious Challenger was one of the first almost universally reviled cards in the game by anyone not playing Secret Paladin. A 6/6 for 6 mana are mildly below average stats, but the real reason to play it and the collection of poor cards known as Paladin Secrets is what Challenger does for them, which is that second phenomenon. Stranger not only draws multiple cards for you; it not only thins your deck of things you'd rather not draw alone; but it puts those drawn cards directly into play without expending the mana for them. Any card that performs two or more functions in terms of draw/play is generally going to be bad for the game. Where have we seen this in recent times? That's right! Another Paladin card known as Call to Arms, which was just nerfed because it has the same, ridiculous triple effect as Challenger did.

Obviously, the reason that Challenger was created was because no one played Paladin Secrets, since they were generally considered to be below average (at best) cards. Unlike Hunter or Mage Secrets, they're easy to play around and often have minimal impact when activated. On a strict cost basis, that makes sense, since Paladin Secrets cost 1 as compared to Hunter 2s and Mage 3s. You'd expect that a 1-cost card would have less impact than a 3-cost, by definition. But, then, why would you want any of those low impact cards to take up your precious card slots? Aggro decks play a lot of low cost cards because they want to have immediate board presence. Secrets don't do that, also by definition, as they sit in stasis until your opponent does something specific. Face Hunter decks, which are the symbol of aggro in Hearthstone, only play Hunter Traps because they tend to enable their ability to continue to do damage to the opposing player. Paladin Secrets, by and large, don't do that or anything else in particular. So, the devs are essentially suggesting that control decks should play a bunch of 1-costs, contrary to normal Control design, in the hopes that they might prove to be effective...? No one plays control hoping that cards will work or with the mindset that cards can just be tossed out with the idea that the opponent will be overwhelmed. On the contrary, control decks are played with the idea that cards will be played as a strictly measured resource.

What that means is that Paladin Secrets, by and large, are still not worth their card slots unless they can be played for free, a la Mysterious Challenger. Team 5 decided to make a halfway attempt with Bellringer Sentry, as he only draws and plays one Secret upon being played and another upon death. But he still lacks the impact of Challenger which was the only reason to play Paladin Secrets. It's very much an either/or situation, unfortunately. Even worse for Sentry is that Standard Paladin lacks the best Secret ever printed for the class: Avenge. Furthermore, the Secrets played by Sentry don't activate the other obvious card to play: Secretkeeper. So, you either play Secrets from hand to activate your Secretkeeper or you play them via Sentry, which makes the deck that much less symmetrical than it would already seem to be. This brings us to the thematic discussion of why a "righteous" class like Paladin would have Secrets in the first place. Maybe it's because of this guy? You could make the argument that Interrogator Vishas was an "evil" Paladin, since most of the Scarlet Crusade thought of themselves as doing holy work. He's certainly whom I thought of when thinking of the title of this piece. (And, yes, I know he says "Naughty secrets." Shut up.)

Here's a list that HSReplay says is the most played in the current meta:

Most people are going to look at that list and ask one of two questions: 1. If you wanted to play aggro, why not just play Odd Paladin and win more? 2. How is it a Secret deck when there's only 4 Secrets? Well, it's not really a Secret deck, because playing the full "tribe" would be even more self-defeating. There are versions of this list out there with at least one Repentance, but that's probably the worst of the usable Paladin Secrets (i.e. not Eye for an Eye or Hidden Wisdom), so it's the easiest to drop. This is basically an aggro deck that arcs into midrange. As such, it gets murderized by most current control decks, which are loaded with AoE to deal with Odd Paladin and Murloc Paladin. But the problem is that it's not fast enough to kill people by turn 5 (you'd never play a 4-cost 3/4 in aggro) and it doesn't have enough on the back end to win later games. Anything with Taunts and/or board clears will eat this list alive. That's approximately 95% of the meta right now.

A potential addition to the deck that was theorized early on was Prince Liam, since he could turn all of the Secrets (and Secretkeepers) that you didn't want in the late game into things that were potentially awesome. Of course, if RNJesus is smiling on you, you get Tyrantus. If not, you get Millhouse Manastorm (Free Mind Controls for everyone!), so that's not exactly something that would attract most competitive players to the deck. Also, if you're playing Liam because you don't want Secrets in your deck for half the game, remind me why you're playing Paladin Secrets again...? It's certainly not just to employ Bellringer Sentry, who's basically an overcosted Spider Tank a lot of the time and literally so if you've gone through the 4 Secrets in your deck already. Again, without Avenge, Paladin Secrets present basically no threat to the opponent. The newest addition, Hidden Wisdom, is even worse because it's even more situational than the rest usually are. It appears to be something that reinforces card advantage for control decks against aggro. No aggro deck would play something this passive (if it's playing Secrets at all.) But most control decks wouldn't want to play something this situational, since it generally only works in very specific circumstances against very specific opponents. This is why, for example, no one played Eater of Secrets and no one will play Chief Inspector, either, since both cards are so narrowly focused that they're vanilla blocking dummies against any non-Secret opponent.

On top of all that design and theory argument, the fact is that playing Secret Paladin just doesn't feel good. Unlike Mages, at any point of the game, casting Explosive Runes or Counterspell or even Mirror Entity or Vaporize, all of which can seriously disrupt your opponent's plans, casting most Paladin Secrets in the late game is a gesture of futility. (Counterpoint: I did win one (1) game in my almost five years of playing Hearthstone by casting Eye for an Eye from a Hydrologist, knowing that my opponent was eager to hit me with his big minion, rather than the two small ones he had.) Unlike Hunters casting Traps, you won't be empowering a weapon or doing damage to your opponent and all his minions. You'll often just be wishing that you had a different card in your hand. Case in point is Sentry itself. Paladin has so many good 4 drops that I've frequently found in my games with Secret Paladin that I actively didn't want to cast Sentry, because there was simply a better option (Consecration, Truesilver Champion, Blessing of Kings, Chillblade Champion, Lightfused Stegodon) that would actively affect the board state.

So (ahem), it's no secret. The deck is going to need a lot of help in the upcoming sets to become viable again. One major step forward would be revising the Basic and Classic sets so that the base set of Secrets isn't so subpar. But that's another argument.

Marc Reichardt
Associate Writer
There Will Be Games