A Strange Aeon presents: A Harrowing Tale of Love and Robots! 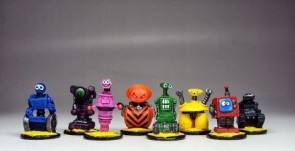 A Harrowing Tale of Love and Robots

I bought Roborally when I was 22, flush with cash from my tax return. It was the last semester of college, I had a great girlfriend who liked playing games, and the wide, open sky of my future was terrifying and exhilarating. I was in a stage of transition, both in my taste in games and in my life--a few games I bought during this period would link me into the games we all know and love. Betrayal at House on the Hill, Tales of the Arabian Nights, Arkham Horror, and of course Roborally all were leading me to the reason why I liked playing games in the first place, leading me back to that remembered summer afternoon that lasted forever, that was full of friends, and dice, and laughter.

We opened the game in her basement room on a March evening, as the spring slowly enveloped our fair city of Pittsburgh. Frustrated with trying to attach the stickers to the rally markers, I nominated Kristen, whose precise hands would later help me again to cut out the paste up pieces of Tales of the Arabian Nights. I punched out the damage markers and began reading the rules. I set out the 8 robots. Enamored with Squash Bot, she let me pick from the remaining 7. I chose Twonky--I suppose because his name and demeanor seemed to mark him as the protagonist of the game.

We chose an easy set up and began to play on her floor. There's something fishy about direct confrontation in a 2 player game--some couples relish it and never get hard feelings, but that was never the case with Kristen and I. We'd get pissed and mean with each other when it got down to just the two of us--Blood Bowl was even worse. After a month or two, she retired her cleverly named Amazons and Orcs, never to play again. Our first game of Roborally had the bitter taste of a rivalry that had no flag in the rest of our interactions--as though something so far below our daily exchanges only surfaced when we were pitted against one another on a field of cardboard and plastic.

I don't remember who won or lost the first game, or if we even finished it. We both realized that the game's real potential lay in having many more robots zigging and zagging across the board, and it made more sense to just have this first game be about learning the mechanics. So we packed up Twonky and Squash Bot until a few weeks later, to celebrate her 21st birthday and the end of the semester with her roommates.

Reading my session report now, I wonder at how irretrievable the situation is--how flimsy all our relationships with people can be. A year ago I was the fifth roommate and today I live alone. Then we were in love and now we are not. It was a memorable night, and I was teaching the rules to Kristen's roommates, Emma and Megan, as Kristen blended up more bananas for the second batch of smoothies. Drunk, young, at the end of the semester, listening to the Pizzicato 5, making laser sounds as our robots blasted each other--Roborally was the beginning of the party. We made a rule that you couldn't look at your program once you'd laid the cards down, which, along with the timer, made for hilarious pressure on any over thinkers. By the end we were all drinking coconut rum from the bottle and laughing.

Emma and Kristen were clearly the only ones in competition--Emma made it to the flag on her first turn, and Kristen wasn't far behind. Meanwhile, Megan had spent the first two turns spinning mostly in place, and on my first turn I dropped Twonky into a pit. Later on, I remember needing only a Move 1 in order to get to the rally marker, and having a hand full of Rotate Lefts and Rotate Rights. Since there were clearly two brackets and we were getting pretty drunk, we called it a game when their other roommate got home and we began drinking in earnest.

Fast forward to Origins that summer, Kristen and I trying the demo of miniature painting and enjoying it. Afterwards, we'd decided painting the Roborally miniatures would be a great project, since there weren't a ton of them and a little color would go a long way towards distinguishing them from each other. We went to Harrisburg's gaming store, the Adventurer's Guild, on a hot day before work and looking at the Games Workshop paints with their ludicrous names, decided on a selection of primary colors and some metallics. She could picture different paint schemes in her head and had a natural flair for composition that I never could match.

We sat in her parents' basement that summer with lights and her curious cat nosing around the egg cartons where we kept the half painted minis and supplies. I mostly worked on junky Dragonstrike miniatures we had primed in bulk so I could practice--I was never very good at it. She'd always come up with something interesting--her robots are a constant reminder of the creative side of her that only manifested itself rarely, in the scarf she knit for me, in her patient hand drawing women in her school notebooks, painting eyes and other details I couldn't even spot. It always saddened me that we never painted together after the summer--we had everything in place but the will.

The eight robots are each painted primarily in red, blue, green, or yellow, with the accents in metallic silver. She'd drybrushed the metallic over their backs, making them look older, veterans of the factory floor in need of a fresh coat of paint. Twonky is red and blue, with light blue eyes looking out on the world, frazzled and nervous. 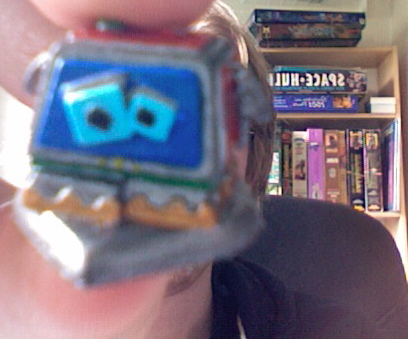 And all of this is a complicated way of saying that Roborally was our game, even though we truly shared only one memorable game of it.

So obviously, we broke up a little over a month ago, before her graduation, before her 22nd birthday. And I played Roborally at TrashFest this past weekend. It was my friend Brad's version that he'd just bought, the original WOTC one with the metal miniatures and the reinforced boards and the virtual bots. Clearly well loved and played often, the different sculpts were painted differently than my version--Twonky was green and black, with a yellow arrow showing which way he was facing. Paint chips and dents in the metal made it perfect, a scared little robot with concerned eyes plodding through a factory, trying hard to get to one specific place. 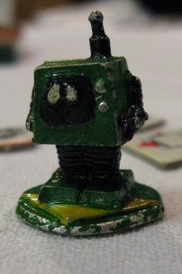 And playing somebody else's copy of Roborally, after several weeks of silence and distance had dumbed down love's ache, I saw how much my heart had in common with Twonky, chipped and worn, spinning in place when it wants to move forward, danger and nothingness all around. One glitch in the program and it's wandering around a strange area you never thought it would end up. I don't know how far you could take the metaphor. Probably not very far. I know it's just a game, but it was our game. Happy belated birthday, Squash Bot.

southernman replied the topic: #274868 06 Jun 2018 17:39
Anyone who can stare at that picture and answer your questions has got eyesight I'd die for - I'd guess the record is by The Jam.
Love Roborally for a fun time of chaos, sometimes a game might break out but usually only one or two people ever used to be in the race at the end.