What The Market Will Bear 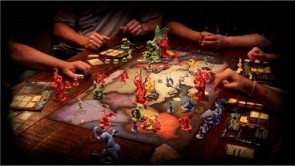 How much are you willing to pay for a boardgame? Logic dictates that prices will keep on climbing, which is to be expected. It’s just the world we live in, and publishers have to make money somehow. But since the advent of Kickstarter, I’m frankly a little shocked at how high some people are willing to go to get a game. The game that has put this in my mind is Cthulu Wars, which launched its own Kickstarter campaign just last week.

Essentially it’s a board game about conquering the world with creatures and cultists from the Cthulu mythos. It doubles as a board game and a miniature line. You can get the game without the miniatures, but that won’t be how most people will want to play. The factions each have a line of highly detailed miniatures. Now’s a good time to point out that I haven’t even bothered to read the rules to Cthulu Wars. For all I know it could be the greatest game of the decade. But what I can see is the price tag.

Leaving aside that the Cthulu mythos is one of the most played-out themes in all of hobby gaming, two things stand out to me. First of all, the campaign is specifically designed to get you to buy the whole magilla, game and miniatures both. It encourages impulse buys that are well over $100. There are limited “early bird” pledge levels, each of which has a limited number. I’m not sure how to really explain it, but the effect is that if you hesitate a little to pledge for just the basic game, you’ll have to pay more money. As of this writing the cheapest you can now get this game is $140. That’s just the game, no miniatures. Of course, the full $150 version with four sets of minis has no cap on how many can take it. And when the game hits store shelves several months from now, that $150 will jump to $169.

The second thing that stood out to me is that this campaign has, so far, been a rousing success. Only a week in, it has already made its goal ten times over. Evidently the sticker shock is not nearly as strong for other players as it is for me. It’s easy for me to look at the sheer volume of money being spent on a game that doesn’t actually exist yet as a physical product, and to feel just a little superior for not being so foolish with my own money. I mean, I’ve bought plenty of games in my life, but I can honestly say that I’ve never plunked down $170 for any one game in my life.

But whenever I start to get a bad case of the smugs, I have to take a look at my own shelf. I have Cosmic Encounter, all three expansions, and enough premium card sleeves for every card in the game. I bought that all full retail too, so you do the math. There’s that copy of Space Hulk 3rd Edition sitting on my shelf, which was not a cheap purchase. The point is, I’ve dropped a c-note on a few different product lines. Of course most of those were progressive purchases, done over the course of several months or years, which is much easier on my budget than one lump sum. But we’ve all spent an insane amount of money on this hobby, including many purchases that haven’t ended up being played that much.

Naturally it’s not really my business how people want to spend their money, especially when it comes to hobbies, where the rules for what is and isn’t a waste of money are lax to say the least. And it’s a little unfair for me to pick on Cthulu Wars here, since it’s clearly gunning for the miniature-gamer market more than traditional board gamers. But I can’t shake the feeling that as a hobby we have abandoned any pretense of consumer discretion. It’s not like we have to spend this much money to enjoy ourselves. If we’re about playing games, probably none of us need more than 20-30 titles. I have a smaller shelf than most, and even I have about 100 games.

But then we don’t always buy games just to play them. We buy them to put them on our shelf and show them off to fellow gamers. Many of us are collectors as often as much as players. Even people like me, who don’t really buy for collection purposes, begin to view our games this way when they cost us a lot or suddenly increase in value. I’m now a little nervous about playing that copy of Space Hulk, simply because it’s not an easy game to find anymore and would be pricey to replace. It’s now a museum piece as well as being a game. And many people count on this to happen. Remember last year’s successful Kickstarter campaign for Zombiecide? Despite a somewhat lukewarm response, the game is fetching unbelievable prices on the secondary market, sometimes exceeding $1000. No doubt many Cthulu Wars backers are hoping the same thing happens here. That’s all well and good, I suppose. If that’s how the economics of the hobby shake out, so be it. I’ve capitalized more than once on high demand to fetch a good price or a handsome trade on a used game. And it should also be pointed out that a pricey Kickstarter campaign is not the same thing as a general rise in game prices, though I’m sure traditional publishers keep an eye on such things to learn how much people are willing to pay for a release.

I couldn’t begin to answer the question of how this will affect the hobby itself. I’m no economist, and the market for hobby board games hardly seems like a typical one. But I do wonder what effect such a lack of thrift has on me, and by extension on my other gamer friends. If I’m willing to spend over $100 on a board game, is that a problem? Do I have any right to criticize a game like Cthulu Wars if it’s merely charging what the market will bear? And perhaps most importantly, isn’t any game purchase especially wasteful, especially one that ends up not getting played ? Do we have an ethical imperative to try to not be irresponsible, even when engaging in leisure activities?

It may seem evasive to raise these questions without having any answers, but it’s where my heart is right now. Too often discussions like these boil down to one of two extremes. Either people get sanctimonious about the spending habits of others, or people get defensive and touchy about what they have and haven’t spent. Both extremes cut dialog off at the knees, and it’s not my intent to push too far one way or the other. One thing’s for sure though: we need to keep this discussion going. Sooner then later we might find ourselves priced right out of what we do for fun.