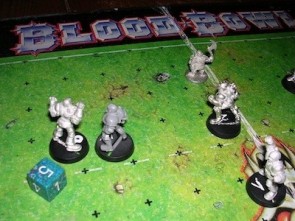 This last week I completed a local no-ship math trade. For you non-gamers out there, that means I essentially put some games I don’t play anymore into a lottery, and received different games in exchange. I was particularly excited to receive a copy of Blood Bowl 3rd Edition this time around. A friend was kind enough to walk me through a partial game, just to get a taste for how to play. I had a wonderful time watching my orc team fall down and pass poorly. It makes me excited to play again as soon as possible, which is more than a lot of other games can manage in such a short amount of time.

Of course, any Blood Bowl fan will tell you that the way to play is in a league, where each person has their own team that gains players and fans over the course of a season. It requires more than a few sets of the game, several people to commit to numerous 2-3 hour game sessions, and sets of miniatures to represent all of the teams. I have been assured many times that it’s worth the trouble, and I believe it. The only problem is that I fear it will never happen. This isn’t because I don’t have access to other sets or to other players. It’s that such a big commitment has become increasingly difficult to get from gamers.

I’m not talking here about games that occupy a single session. Even long experiences like Dune or Twilight Imperium can be set up several weeks in advance. The reason here is simple: it’s just one session. Given ample time and preparation, most gamers are willing to agree to a long game. It may take 6-7 hours, but if everyone knows that going in you can make it happen. What I’m talking about  here are longer campaign-style games, where you meet periodically to play the same game that carries over from the previous one. Maybe you’re running the same character (like in Descent), or maybe you’re meeting for the next “game” in the season (like in Blood Bowl). Either way, it requires a much larger time commitment then is usually available to me or to others. It’s not like people lack for games to play or time to play them. This column is testimony to the time I’ve spent at a game board. It’s that boardgamers have become increasingly unwilling to sink that much time and energy into a single game.

To look at why, let me share a story with you. Two years ago I participated in a league of Das Motorsportspiel, a German car-racing game. We played at least three sessions over three months, gaining points based on where we finished. It took about 3-4 hours for a single session, which isn’t a huge commitment in any given month. But after three months a couple of things became apparent. First of all, schedules were becoming more difficult to coordinate. New commitments came up and other priorities took over. Secondly, it was also obvious that a couple of players  weren’t enjoying themselves very much. They had played before we started the league, but it was clear that every game was becoming more and more frustrating for them. And finally, family began to be a highly unpredictable factor. In fact, I’m sure that such a league couldn’t happen at all these days. I’ve had a second kid since then, and two of the other members have had children of their own.

The increase in outside commitments is simply a fact of life these days. We have stuff going on, and when we don’t have something going on we have a huge pile of things we could do to occupy ourselves. Obviously this dovetails into the life of a young family as well, where a kid getting sick can throw off your entire week. It’s not like this gets easier as the kids get older either. So a big product of this is just where I am in life.

But I’m very interested in my second point above, where certain players clearly weren’t enjoying themselves. In my particular example, one reason for this is that Das Motorsportspiel is something of an unforgiving game. There are no backsies, so if you mess up you just live with it. Furthermore, it became obvious that it was the sort of game where you were either good at it or terrible at it, without my hope of improving one way or the other. It required a particular sort of quick decision-making skill that apparently couldn’t be taught. So the same people had trouble with the game every time. Our league wasn’t helped by the fact that as a design, Das Motorsportspiel seemed a little flawed. We were never totally clear how we should handle penalties and crashes, and it became increasingly difficult to catch the guys at the front of the pack. For an experiential gamer like me, it wasn’t really a big issue. But if you were playing for blood, I could totally see how it would get annoying fast.

Now most long-form games are designed to maintain balance over long periods of time. Otherwise why would someone waste their time with them? But it’s the fear that you might not like it the whole way through that keeps a lot of people away. I’ve even tried to set up campaign-style games and had people tell me they didn’t think they liked the game that much. On one level this mystifies me. It’s not like we aren’t already spending an inordinate amount of our time playing games in the first place. Why not apportion a small amount of that time to a single game on a monthly or bi-weekly basis? Seems simple enough to me. After all, not everyone I know has kids at home that limit their gaming time.

But here’s where it gets tricky. For my own part, I have games that I need to review. That requires me to spend some time playing specific titles, which is time spent not playing other games. But a lot of gamers don’t even have reviews as an excuse. They just buy a lot of games, and they don’t want to tie themselves down to a specific one if it means they’ll be missing the curve of new releases. This seems to be a particular insanity of the board gamer, where collecting is very nearly as big a deal as actually playing something. It’s obviously less of an issue for other types of gamers like RPG fans or miniature wargamers. That means that games that integrate campaign-style elements (like Descent, the D&D Adventure games, and Blood Bowl) will almost always be played as a one-off for me and most other board gamers.

It’s too bad, because my recent foray into my Magic league has shown me how fun a long-form gaming experience could be. I can commit to that one because it’s just a little simpler for us to coordinate, and because everyone is more than willing to stick around for it. That’s becoming increasingly rare for board gamers, even as board games integrate more elements from other styles of games. It would surely be folly for me to spend any more money on such ridiculous pursuits. I’ll stop right after I price some more Blood Bowl teams…