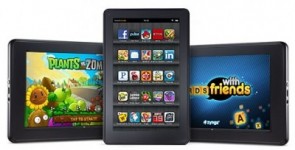 A year ago I received a Kindle Fire for my birthday.  I hadn’t asked for one and in a lot of ways I really didn’t want one, but I toyed with it a bit and realized that I kind of liked it.  It was quicker to get web access on it than it was my laptop, was more mobile and generally lasted longer on a battery.  Over a six week period it grew to be a pretty big presence in my life, and my traditional e-ink Kindle was more or less set aside.  I pull it out now and again and I still think it’s better for text-to-speech than the Fire, but I’ll be honest, if I had opened it three days ago to find it broken down I wouldn’t be heartbroken.  The Fire would suffice to replace it.

But the last 72 hours have brought clarity to something I’ve been suspecting for the better part of six months.  My little glass window to the Internet is not bringing happiness nor nurturing my soul.  In fact I think it’s an overall detriment to my well-being, and that’s not something I tolerate the way I used to.  If somebody or something is bringing me down, it gets dumped.  So it’s time for a change.

A trio of minor encounters pointed out the errors in my habits, and all of them are something each of you will likely have familiarity with, because they’re related to my single biggest hobby.  The first was the release of Summoner Wars on Android, a game that I enjoy very much in its traditional form.  A seven inch screen provides some pretty serious limitations (and let’s face it, the screen isn’t seven inches in either direction or even diagonally on most devices), and Summoner Wars revealed them in spades.  Cards were too non-distinct to effectively recognize, and the touch interface made it difficult to execute actions so simplistic that you don’t even think them when you play the game in its physical format.  And in spite of sitting next to my son while we played the life was sucked out of the game, as the kind of physical and verbal signals that come from playing in the real world are largely lost.  The game went from being an event to being an exercise.  At the end, after struggling with situational awareness and setting off the wrong actions because of touch interface, I told my son that we hadn’t used our time wisely.  A copy of Summoner Wars was on the shelf not 20 feet away, and the time we had spent trying out the new version had been wasted on a shadow of the true game, two-dimensional and vague.  It’s a necessary evil I suppose if we’re apart, but an impediment to happiness when we’re not.  I told him that from now on we play the real game and he readily agreed.

He was playing with the same handicaps I was so I congratulated him on the win, richly deserved.  Then I shut the game down and did what Summoner Wars players apparently do, removing the software from my device and rebooting because if you don’t it cuts an artery in your battery that bleeds it out in short order, even with the lid shut.  I had tried the game two nights earlier and awoke to find my battery stone dead in the morning.  This was the second issue.  The book I was interested to listen to on the way to work was going to require me to rig a charger for the car if I wanted to use the Fire, so instead I pulled my Kindle 3 off the desk and opened it for the first time in three weeks -- half charge, plenty for my 75 minute commute each way for the day.  I’m not spending my life looking for outlets like iPhone users do.  Life is too short, and it’s the tools job to serve me, not the other way around.

Yesterday the third stroke came down, giving me full pause and clearly showing me that this whole “tablet” thing wasn’t going to work out for me long term.  FotressAT’s Pug picked up a copy of Warriors of God and crowed about it in the threads, and I remembered that I’ve gone a couple of weeks without playing a turn in my Vassal game.  Pug crowed for good reason -- WofG is one sweet, unique game, and it’s well suited to solo play.  Generally I’ll punch out a couple of turns a week, playing one or even half a turn in the evening when the family’s choice of TV doesn’t interest me.  That kind of moment was upon me as I finished in the kitchen and began to head for the TV room.  I remembered Warriors of God and thought about grabbing my laptop to fire up ol’ Joan d’ Arc for some beat-down on the English, then found myself reaching for the Fire instead.  I can’t play Warriors of God on a tablet, but the Fire is easier, less bulky, quicker.  Maybe I’d just read a few threads on the Internet instead.  That moment right there, the moment that I chose to settle for writing comments into a few threads instead of playing a world class wargame is not good for my soul.  It doesn’t make me happy.  What had been a handy device for communicating suddenly looked like a soft addiction, something I use because it’s not too much of a bother to do so, and that may be the legacy of Steve Jobs – “it’s not too much of a bother to use.”

Tablets are at their best as an outbound device.  They’re excellent for watching video or reading newspaper articles or magazines, but as an inbound device they essentially suck.  We use them because we can, not because they’re ideal.  My friends show me the zoomy-zoom of multi-touch, but when I ask how to get a context-sensitive menu of options that apply to the exact situation I’m in, something accomplished with a single mouse-click on a bigger platform, they’re at a loss for words.  In short, the spartan interface and exceptionally limited real estate are showstoppers for complex interfacing, and I’m kind of a complex guy.  They’re handy sure, but they lack the versatility that I personally need to express myself the way I want to.  When I’m gathering information they work well, but when I’m disseminating it (like I am as I write the article) they’re insufficient to the task.

Things I Will Do With My Tablet:

Things I Won’t Do With My Tablet:

All four of the “will do” tasks are in my Fire’s wheelhouse, and I have enjoyed it for these purposes.  But I’m officially swearing off using it for gaming and for accessing web forums including Fortress Ameritrash.  The result will likely mean less contributions to the forums here from me (hold your applause to the end please) but with a bit of care it’s likely that putting the damn thing down and getting out my laptop will result in the more creative endeavors, particularly the writing of articles more often and frequent blog posts on deeper subject matters.  Of course, it will likely mean more gaming on Vassal where there’s sufficient screen space and a much broader array of interface options (and frankly some great games that aren’t available anywhere else).  Instead of settling for what’s fast and easy I’m going to take the time to go after what’s harder and what takes more time, and consequently what produces a better emotional and intellectual reward for me personally.

Sag is a monthly columnist for Fortress: Ameritrash.
Click here for more board game articles by Sagrilarus.
Now available on Kindle!