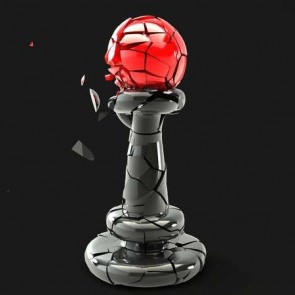 "If I could add to your excellent [analysis] of the game and why and how to win in Archipelago, I think I would add this that I was expecting for you reach at some point in your [post]...

In Archipelago you need to win discreetely and not outrageously. You need to [finely] tune your victory, not being too obvious, not smash[ing] down your opponent under your feet with a huge gap of difference, let the others think they are still well in the game. At least this is what I think and discovered after quite [a few] games."

That is a quote from Christophe Boelinger, designer of Archipelago.  I've been reading a lot talk about semi-cooperative games, which seem to be the new rage.  I welcome it, because I find these games endlessly fascinating.  But there is a strain of analysis that makes the rounds saying that they do not work, they are broken.  Essentially they posit that the rational strategy in a semi-cooperative is to threaten to tank the game to get side payments from other players in all situations, no matter the game state.  In essence, this is the pure selfish strategy.  While people who argue this tend to cloak their arguments in rationality, it has never sat right with me.  With that in mind, I had a long conversation my wife about the incentives inherent in these semi-cooperative games.  Our day jobs are as a professors in a quantitative social science field, so I deal a lot with moderate level game theory.  I am not a theorist myself, but do need solid chops to read it regularly.  My analysis could be wrong, but here's the calculation I see happening in a game like Archipelago:

I tend to assume everyone plays within game, pursuing Knizia's winning the game objective (if they don't, this genre seriously doesn't work).  At any point in the game, you assess some probability of winning the game, with an uncertainty distribution around that assessment (e.g. 14% +/10%).  That fluctuates depending on what is going on the game state, if you're getting your ass kicked, how far away you are from the end of the game, etc.  In normal games, that number could go down to zero/close enough that a great deal of your uncertainty covers zero, but there's nothing you can do in these kinds of games besides rage quit, which I'm not considering as a possibility.  You play to the end and try your best to win, even with a 1% +/- 5% chance to win or whatever.

In Archipelago, I've not played other semi-coops that are making the rounds like Dead of Winter or CO2, you similarly go about your turns with some subjective assessment of your chance of winning, looking into the future, when the game ends.  The difference is that you can threaten other players to end the game or refuse to cooperate unless you get benefits.  Unlike normal games, the chance to win the game can be removed (or strongly hurt) by other players.  So players assessing themselves in a strong position (large perceived % chance to win) need to pay off players not doing well, reducing their chance to win in the process and increasing the opponent's chance.

What is stopping players from continually threatening to end the game, then, forever? Why isn't this rational like many people insist?  I do not think so.  It's not rational because at some point it is cheap talk, depending on game state.  Remember, we assumed at the beginning of this game that players are playing with Knizia's trying to win within a single game goal.  Sure, a player with a perceived 95% chance to win can threaten to tank the game unless she receives side payments, but we call that "cheap talk" in the social sciences. The threat of "I will make myself lose" is not credible with other players, who perceive that the player herself has a decent positive probability of winning, so they would call you on it. Then, as a rational player who has a chance of winning you swallow it and chip in for crises, etc, no matter what you promised. So what's driving continued play is the idea that all players losing the game is a certain 0% loss, which only desperate players who perceive they are near 0%, or near the end with little uncertainty about the result, will perform.

I haven't done math on this, but my guess is that in equilibrium all players threaten to not help with the game state till everyone perceives an indistinguishable chance of winning from one another. That's why it's important to introduce a great deal of uncertainty into a game of this nature (secret objectives, in this case). Also, this analysis is of a game where a player can literally end the game whenever they want, not just hurt game state like these semi-coops actually have. Every player knows how they are doing on secret objectives, so every player who is doing well on their secret objectives perceives themselves as in the lead or with a decent chance of winning. Which means unless someone really is sucking they will not credibly threaten the loss option---it is just cheap talk for players doing reasonably well to do so.

Also, this discussion shows why this type of game completely breaks with players who are playing irrationally (spite) or, more importantly, who perceive being forced to give benefits to losers as normatively unfair to them in boardgames. Lots of people are like this, so I could see it being a huge problem. Because no one is able to completely buy themselves into Knizia's "no metagame" ideal.  And if there is a metagame over many plays, torpedoing a game can have a benefit to a rational actor to gain credibility---it's no longer cheap talk, and they can keep extracting side payments even when it would not be rational to do so within a single game.

The final twist in Archipelago that makes everyone more likely to not threaten to tank is the knowledge that any of the other players secret objective could be to lose.  So if you tank, that could be playing into exactly what the other player is trying to get you to do---you will have a definite loss and that player a win. Still, this traitor mechanic is not necessary for the game to not end in a table loss every game among rational players.  It is just another way to add uncertainty into the game and make players even more conservative about not coming as close to the knife edge where the game could be lost due to misperceptions.

Finally, notice that versions of the game with no real side payments and little uncertainty could make this type of game less and less fun, (I think) creating a more knife edged equilibrium toward "threaten until you are exactly equal in everything."

For what it's worth, I am not this boring to play games with, and I don't really play in this cold, rational "manipulating ambiguity" manner so characteristic of our favorite semi-mechanical game group members.  But I do find these games to incorporate a much more complex and subtle understanding of how to win and interact with other players.  There is, of course, a different discussion to be had as to whether this game of finely balanced side payments and tanking threats makes a fun game!  If you want to read a classic game theory treatise on some of these cooperation issues, read Robert Axelrod's book, The Evolution of Cooperation.

TLDR: I'm not 100% sure about it, but my read on semi-cooperative games is that perfectly rational players in a semi-cooperative game may generate reasonably common game state losses through misperception.  At equilibrium, however, my sense is that players should quickly drive the game to the brink of loss but, once there, losses shouldn't happen, given perfect information.