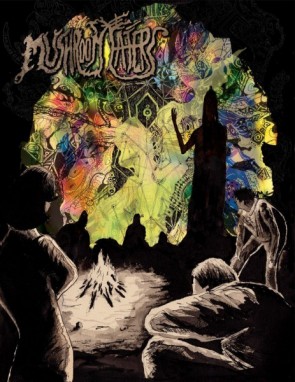 We'd dropped the acid just before sunset on a day so hot you could smell the tar cooking on the roads. We climbed a hill as we came up and spent the night on a golf course, pretending to play as the shapes and sounds shifted and blurred around us. Then, tired but happy, we lay and let the warm grass tickle our necks as we watched too many stars spinning overhead, twinkling in too many colours.

In the hard dawn of another breaking day, we said our goodbyes and drifted off, the hard teeth of reality gnawing at the edges of faith. I went back and sat with Bob in his small, dark room, waiting for the bad things to come. We knew that no amount of grass or beer or coffee could smooth the jagged edges off the comedown, but we wanted it so badly. So badly that we grasped around for something, anything to distract us. So Bob picked up his chess set.

When we'd met, a year before, young men pushed out into the calloused arms of the world for the first time, it seemed like everyone had bought a game with them. For Dave it was a backgammon set in a zipped leather case, rolling the bones and turning the cube like a seasoned gambler for no better profit than victory. For Mark is was a deck of tarot cards. Not the fortune telling game but a French bidding game. Although it became like a magic ritual in itself, tradition dictating that you never shuffled the deck between games, only cut it, and you'd deal cards three at a time. Three, a magic number, a benediction to the card gods that this time, you'd have a hand worth bidding on. This time, you'd call a king to identify your secret partner and ride the fates to a glorious win. Then  beer would be poured and the cut would come and the doling out of cards, three at a time, slicing the night into infinity.

But for Bob it was his chess set. And I learned something from Bob that I ought to have learned years before: that if you're good at something in a small town, it doesn't mean you're any good at it at all. I was reckoned a decent chess player in my pokey little village where you either played games or took drugs or went mad. Out in the wide world, I discovered, I wasn't very good at all. But I loved playing with that set, nevertheless. It was hand carved from soapstone, with an inlaid stone board. The pieces were nothing like a classic set, being squat, angular little totems that looked like objects from a primitive cult. But then, maybe that's exactly what they were, back in the dawn of time.

I liked the weight of them in my hand as I considered a move. I liked the smooth, cold feel of them against my skin. I learned the chips and veins that made each piece unique. I loved especially the clicking noise the made going down on the board and the sweet double-tap of a piece taken as they did so. I played, and lost, and didn't care because I was playing with a beautiful thing.

Seeing them in the face of impending sobriety that morning seemed a great comfort. So we set them up, the stone cool even in the hot air, and we began to play. Brains still pulsing with hallucinogens, I knew I would play any kind of decent game and would lose easily, but it was a fine distraction.

I don't remember how long it took us to notice: three moves, ten, maybe more. But at some point, Bob pointed out that whatever we were playing, it wasn't chess. And that, furthermore, whatever we were playing, we were both playing by a different set of rules. On my side of the board, I'd formed the pieces into a squashed spiral, king in the centre, like some kind of sigil against the morning after. On his, he'd started taking his own pieces, leaving gaps in his geometric ranks that looked like a computer punch card.

And we laughed, and we roared and we howled until the tears ran down our cheeks and dried to tracks in the midsummer heat. We laughed until we could no longer remember why we were laughing, and that made us laugh even harder. And when we'd finished laughing, we decided to finish the game.

What happened next is one of the abiding mysteries of my life. Playing an entirely random chess variant, with a different set of rules on each side, with my opponent taking his own pieces, I lost. I'd expected to lose and indeed I lost what was effectively an imaginary chess game with myself. To this day I wonder what that says about my state of mind regarding both friends and games. I've long mocked the idea that drugs lead people to higher truths: they're just synthetic fun. But if there is any value in that idea, that morning was the closest I've come to finding it.

Such thoughts were for later. As it was we packed away, and made some coffee, and faced the fragments of the shattered day as best we could. Later, wits recovered, we would pull out the set and play again. As I sat, rubbing my thumb against the soft chips in the corner of the rook, I recalled the mineral discs of the Middle east that remind us of others sat, playing, thousands of years before. And I fancied that the porous stone beneath my fingers might almost have absorbed the memories of that day.

MattDP wrote: ...the hard teeth of reality gnawing at the edges of faith.

Rather succinct and oh so true. I recall those days.

Brilliant story by the way. Really really enjoyed that. Thanks.

I've bought a lot of books, periodicals, subscriptions on such short stories.

Consider your book purchased. Thanks again for the great story. It resonates.

Mr. White wrote: Indeed. Matt, this is a new approach to your writing since that game store article, correct?

Really glad people are enjoying these - thanks for your kind words.

I made a decision at the end of last year to try and write differently. It struck me that however much we talk about strategy and mechanics, the pleasure of gaming is actually in the experience and the people. After all, even if a game is *all* about the strategy and the mechanics, you can still talk about that by talking about the experience of play, of how the challenge felt, of how your thought processes ran as you learned the rules and came to grips with the depth.

Plus, I figured it'd be a lot more fun to read - and possibly to write. After all, there's only so many times you can write a dry, mechanics oriented review of a game before it starts to feel repetitive. And I couldn't recall anyone else having done it before, so I thought I'd give it a whirl. The games shop article was the first.

Interestingly, the few people I discussed this with before trying it were pretty negative. They felt that journalism ought to be succinct and to the point and that a review should put its opinions front and centre, not make the reader work to pick them out from between the lines. I have to admit that's a good point: but I feel like this is working out pretty well. What you lose in transparency, you gain in readability.

Chapel replied the topic: #265976 19 Mar 2018 14:23
I like the approach in talking about games as an experience rather than as a sanitized for your protection and dry rote repeating of mechanics. I write all my reviews/sessions as. a story, because to me that is what they are. A journey through theme and ideas. But that may be the RPG'er in me more than the puzzler. So good job I say.

MattDP wrote: Interestingly, the few people I discussed this with before trying it were pretty negative. They felt that journalism ought to be succinct and to the point and that a review should put its opinions front and centre, not make the reader work to pick them out from between the lines. I have to admit that's a good point: but I feel like this is working out pretty well. What you lose in transparency, you gain in readability.

I dunno. Some of the better game related articles I've read are the ones that don't spell it out for me.

I usually think of Kuhrusty's seemingly negative review of Wiz-War on BGG in regards to unconventional critiques.
Essentially it is a positive review. But a lot of people don't get it, and that's ok. Why pander to a lesser demographic for their sake when you can elevate not only your own art, but the minds of your readers as well?

I say full steam ahead. Let the plebes sort it out for themselves.

One wonders if Hunter S. Thompson was given the same advice about playing it safe with journalism. I'm glad he didn't listen to them.

But then again, I am an iconoclast. To me, sacred cows exist to either be destroyed or their worth proven by attempting to destroy them.

99.9% of board game criticism revels in cartography and all of the taxonomic jargon that goes with it.

The good stuff actually considers what is being mapped.