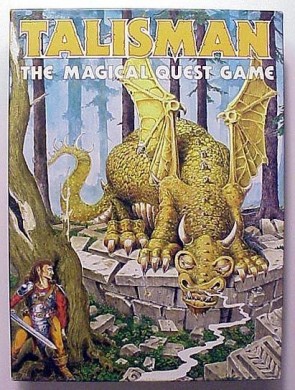 It was a filthy, awful hole. The furniture was ancient, the carpets torn and the wallpaper peeling. There was food mouldering in the fridge when we moved in. But it was cheap and so it was home. It consisted of two rooms. One was a kitchen diner with a bed in it. The other, mine, was a bedroom with an en-suite toilet. I used to lie in bed in the mornings, listening to my flat-mate take a dump while I smoked cigarettes to cover the smell.

My small collection of games lived on a high shelf in the airing cupboard. It was all I could do to keep them from the nightmare of the rest of the place.

A couple lived downstairs in the basement flat. They owned it, so it was in much nicer condition than the tip we lived in. We didn't have much to do with them except a polite nod in the shared hall as we passed. The universal city-dwellers' replacement for socializing. The man was tall and thin with long black hair and a pointy nose. I nicknamed him the raven. He had earrings and torn jeans. A typical urban bohemian.

One day, after many months of stewing in our own filth, I passed him in the hallway and failed to share the polite nod. He was carrying a large box of belongings out of the house and was clearly upset. Being British, there was obviously no way we were going to discuss what was actually going on. So instead I did the only thing my upper lip dictated I could do to help: I offered to carry his box.

More boxes followed, out from the flat and into his car. We hardly knew each other and as the boxes ran out, so did the conversation. To help things along, I invited him up to my flat for a drink. He accepted, not knowing the only drink I had was a barrel of home-brewed cider that I'd had stewing in the wardrobe. Then, being British, we sat in awkward silence, drinking our horrible hodgepodge of fermented apples and lost hope.

Desperate to break the ice, I suggested we play a game. About the only thing I had in that airing cupboard that was straightforward enough to teach was Talisman. So out it came. He was the Troll, and I was the thief.

We started moving around the board, collecting stuff and killing monsters. Around the time I found the axe I wanted to make a raft, the glasses were empty. The easy solution was to dip them into the barrel, so we did. The easy solution is not always the wisest one. Sometimes, it's too easy.

Round and round the outer region we went. He found the Holy Grail and later had it stolen by Raiders who, appropriately enough, left it at the Oasis. I battled the Demon and lost, got lost in the Crags, lost money gambling in the tavern. The glasses filled, the barrel emptied.

Since I played before, it was no surprise I made it into the middle region first. For all my losses, I still had that axe. As I crossed the running river the talk began to run free, spilling over the edges of the game and into reality. He was leaving the flat. It wasn't his, but his girlfriend's and she'd thrown him out.

He made it a few turns later, using Troll-strength to defeat the Guardian and climb the fabled steps toward the centre. We scraped round the middle of the board, looking for a Talisman. He made it to the Oasis first, picked up the Grail. There he also found a follower: the Princess. He stared the card, mouth turned down. Their relationship had broken up. An argument over some trivia had escalated, sucked in all the little things that were wrong until it had become a roaring storm.

I got through the portal by craft. He, a turn later, by strength. We went round the hell of the inner region in opposite directions. He'd lost his direction, had nowhere to go, didn't know what to do. In the meantime, he had another refill from the almost-empty barrel. I sacrificed followers at the vampire, much like I'd sacrificed English reserve to Bacchus. He gave me a lot more joy than the bloodsucker did.

As I fought my demons in the pit, he was fighting his own. Dicing with death and overcoming the werewolf, he made it to the crown. And somewhere, through the alcohol, the power of command seemed to become his to grasp. Like the game, it was over. Time to move on. Next day, he'd go visit his brother in the Midlands. Spend some quality family time and see where it took him. Could he sleep on my floor for the night? Of course, he could. It was the least reward he deserved for beating a gamer at his own game.

In Norway, one of the words for hangover literally means "I have carpenters in my head". Next morning it felt like I had one on my head, strong thighs crushing my ears as he drilled into my skull. Cider is a terrible thing. Struggling to consciousness, marching toward a day of hell I realised that my room, like the barrel, was empty. My guest had risen and gone on his way to his new life. I never heard from him again. I'm not sure if I ever even knew his name.

In my attic at home is the copy of Talisman that we played. It's battered beyond belief, missing so many cards and pieces that it's no longer usable. It's been up there for years. When I climb into the attic and root around among the newer games and junk, I see it sometimes. I pick it up, carefully so as not to further damage the split box and tuck the spilling contents back inside. I'm sure it still smells of apples.

Matt Thrower
Head Writer
There Will Be Games

edulis replied the topic: #272772 07 May 2018 08:11
I enjoyed reading this, it really stirs up memories. Memories of drinking, board games, but also of random encounters with people who pass through your life.