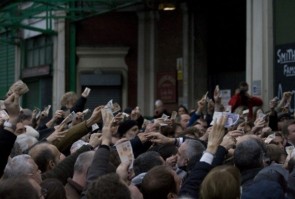 I'm an idiot for not using Kickstarter.

Ask anyone. They'll tell you. They tell me all the time.

I've lost count of how many people have approached me and told me in no uncertain terms that I'm stupid for not crowdsourcing my games. They insist that the success of small board game publishers is contingent on their savvy use of crowdsourcing. Almost without exception they finish with some variant of "... and let me tell you how my company can help you run a successful campaign."

I'll grant that crowdsourcing platforms serve an important role: they enable people to bring their ideas to life by matching them with a host of interested, individual investors. For game designers with lots of creativity and limited resources, they are a godsend. They enable designers to take their ideas directly to consumers and secure near-immediate funding to transform those ideas into realities. To be honest, using crowdsourcing to bring one's game to market is a great idea.

It's just not for me.

I have nothing against people using crowdsourcing. If it fits your business model, then by all means have at it. I choose to avoid crowdsourcing for a few reasons. First and foremost, I'm unabashedly lazy and crowdsourcing requires effort. Beyond that, I have some concerns about elitism, originality, and artistry.

Let's start with laziness. I'm far too indolent to make the snazzy videos and eloquent sales pitches that crowdsourcing campaigns seem to require. I also find it wearisome to come up with clever rewards and special prizes for backers to "unlock" at strategic funding milestones... not to mention all the tedious updates and love notes necessary to keep restless backers placated. I suppose I could hire someone to do all that stuff... but you know what? I don't want to.

Okay, so we've established that I'm lazy. Let's move on. Let's talk about "backer only awards."

It's not clear to me what drives campaign organizers to offer special awards available only to their backers, actual market forces or fear of tepid support without the lure of shiny, restricted items. Offering exclusive treats is certainly one way to bolster one's attractiveness amidst an ever-increasing number of competing campaigns; however, as I've come to learn the hard way, such offers can also be a source of consumer strife, especially for those who discover a product after its campaign has ended. I could argue the case for giving special components to backers and then offering those components for sale post-campaign, but I doubt that would satisfy the elitists.

Then there is the incompatibility of my design philosophy with the fundamental nature of crowdsourcing. I want to create truly innovative games: I don't care about trends and I could not care less about targeting and exploiting market niches. For me, it's all about developing a vivid theme, pairing it with a strong story and some solid mechanisms like a fine wine with a delicious meal, and serving up an immersive social experience. Crowdsourcing, in contrast, replicates and enhances past endeavors. It thrives on trends and excels at identifying and exploiting specialized markets. By their nature, crowdsourcing platforms supplant artistic expression with analytics that capitalize on data warehousing and lessons learned from past successes.

There is an old saying in biology: ontogeny recapitulates phylogeny. It means that an organism's growth reaffirms its evolutionary development. I think it's the same with crowdsourcing campaigns: each new campaign is an evolutionary instance that contains within it echoes of all prior instances. Once a game publisher starts down the track of crowdsourcing, they place themselves on an evolutionary path inherently defined by emergent trends and past successes. The endeavor of game creation loses its artistic essence and becomes an exercise of maximizing funding based on making the "X-most" incarnation of a "Y-style" game that "Z-type" investors will be willing to back. Consequently, success becomes measured in milestones and time to fund, rather than how well one realizes their creative vision and captures the imagination of their audience.

Of course, no discussion of crowdsourcing would be complete without talking about money. Crowdsourcing is all about using other people's money. I subscribe to the argument that putting one's own money on the line makes for a better product. I know from personal experience that when I put my own resources at risk to develop and launch a game, it makes the entire process more personal and intensifies my drive for excellence. I'll readily admit that I'm fortunate to be able to fund my own projects. But you know what? So are most established game companies. When those companies take advantage of a crowdsourcing platform, they are not helping develop the industry or the market, they are simply exploiting a funding source they don't need in order to undertake cheap market research or pre-sell products. The byproduct of their exploitation is reduced share of voice - and therefore reduced likelihood of success - for smaller entities.

So, where does that leave us?

Objectively, crowdsourcing is a wonderful mechanism for small entities seeking to transform their visions into products. For a small percentage of funds raised, a crowdfunding agency can match buyers with sellers and enable a creator to develop and deliver a product to an accepting market. Just because it isn't right for me doesn't mean it is not perfect for someone else. That said, I offer this warning to anyone contemplating using crowdfunding: the crowd is always hungry, but it has very specific and often fickle appetites.

As for me, I'll keep my distance. I like money as much as the next guy, but I've come to appreciate that there are some things that I like more. Like being lazy. And different.

Jim was introduced to AD&D back in the mid-1970s. For a high school kid that grew up devouring comic books, Warren magazines, and Harryhausen films, AD&D was the epitome of the game he never knew he wanted. From his very first game, he was hooked on the magic of imaginative play.

By day, Jim works as a scientist; by night, he creates fantasy worlds and designs unique and quirky games. He is the owner and sole employee of Devious Weasel Games.

Jim is married to a wonderful woman, has three awesome kids, three unruly and enigmatic cats, and a goofy, loyal Newfie. He loves good food, single malt Islay scotch, and pretty much all dad jokes.

And math. He really likes math.

Jim was introduced to AD&D back in the mid-1970s. For a high school kid that grew up devouring comic books, Warren magazines, and Harryhausen films, AD&D was the epitome of the game he never knew he wanted. From his very first game, he was hooked on the magic of imaginative play.

By day, Jim works as a scientist; by night, he creates fantasy worlds and designs unique and quirky games. He is the owner and sole employee of Devious Weasel Games.

Jim is married to a wonderful woman, has three awesome kids, three unruly and enigmatic cats, and a goofy, loyal Newfie. He loves good food, single malt Islay scotch, and pretty much all dad jokes.

And math. He really likes math.

Discuss this article
Log in to comment
Posts in discussion: Jim Felli - Far From the Funding Crowds

hotseatgames replied the topic: #275368 14 Jun 2018 08:21
Another fantastic article! I am very glad that you have had the means to create your games as you see fit. I have never had a single complaint with any of your productions. Keep up the great work!

ChristopherMD replied the topic: #275370 14 Jun 2018 08:57
In addition to laziness, which I'm completely on board with, I'd add there must be quite a bit of stress involved. Assuming you're someone who actually cares about following through on your promises after you've taken money from people. You get to stress out trying to insure that everything happens exactly as stated in the KS and that it all happens on time. All the while taking comments/complaints from people that consider you to be working for them.

Kickstarter is a huge game, with publishers as the players, customers as the bank. The goal of the game is to create the most efficient engine for generating income.

You sir, want to spend your time designing a game, not playing one. Kickstarter makes no sense for you.

Beyond that, I have some concerns about elitism, originality, and artistry.

I think Jim and I could be friends if I were smarter and lived in a different part of the country.

Anybody who has played Shadows of Malice or Zimby Mojo cannot deny their uniqueness and how far removed they are from the current trends as epitomized by the ocean of vapid tripe being pumped out on kickstarter.

Regarding the 'special awards', I'd add that campaigns that engage in this practice are outright preying on the weak-willed, FOMO-infused consumers who struggle with assessing real value when faced with the allure of exclusivity. It's a scummy practice, and I'd argue it's the boardgaming equivalent of the lousy "lootbox" system that is currently plaguing the videogames industry. Said lootboxes are finally being derided en masse by videogame fans, maybe one day boardgame players can wake up as well.

* They didn’t playtest that, or
* They playtested that and are withholding it.

Both rub me the wrong way and turn me off of a lot of campaigns. They strike me as ingenuine.

When I see established companies using KS as a preorder system (Queen, I’m looking at you) it also bothers me. The word I associate most with it is ‘shovelware’. As in they’re literally shoveling content at me with no risk on their end.
Read More...