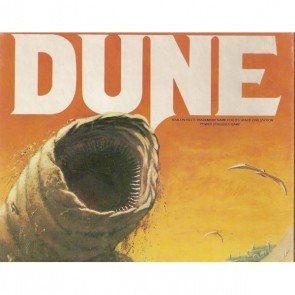 Game Name
Dune
There Will Be Games

The hunt is always better than the kill. And the hunt for a sensibly priced copy of Avalon Hill's Dune was about the longest of my collecting career. The quarry I tracked down proved to have a very battered box but pristine contents. To these I added a set of the redrafted rules and then five other friends, ready to fight for the Spice on Arrakis.

Anticipation was such that it was almost inevitable that the unfolding game couldn't live up to it. The trouble started in our first big clash over a stronghold, the critical map areas that win you the game. On the one side, my Fremen. On the other, the vile Harkonnen.

If you're at all familiar with Dune from the original novel or any of the various screen adaptations, you'll hate the Harkonnen. They're archetypical bad guys but drawn with such skill that you feel the loathing rise, involuntarily, from deep inside you. It's a testament to both the game and the novel that in that instant I felt that same loathing for a guy who'd been my friend for twenty years.

I wanted to win. And win hard.

You may also like this review of the new board game from Gale Force Nine. 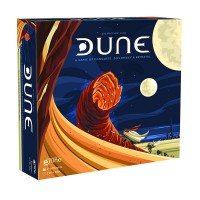 Review - Is Dune the Second Coming?

Dune's central pleasure and pain is its dial-up combat mechanic. Each player in the fight secretly chooses a number up to the number of armies they have in the battle. Then they choose, face down, a leader and a weapon card, each of which can have a high value. Add all three numbers together and the biggest total wins. The catch is that win or lose, each player removes the number of armies that they chose.

If you've never played Dune, it can be difficult to imagine what a brutal, unforgiving vice this is. Choose too low and you're certain to lose both the fight and the resources you're putting into it. Choose too high and you cripple your ability to defend yourself for many turns to come. To prosper, you have to get the balance exactly right. Yet in a twist that seems almost perverse, the other great pillar on which Dune's reputation stands is unreliable information.

So I'm there, staring down the Harkonnen player and feeling like I want to smack the smug grin off his face. He's got a bunch of cards hidden, one of which might invalidate whatever leader I pick, and I have no insight into which it might be. He's got a bunch of weapon cards, too, and at least another player knows what they are. And he's told me as part of a deal we made earlier in the game. But do I trust him?

Do I trust myself?

My hands are so damp turning the dial that I fear the sweat might bleach the dye out of the cardboard. I want to win so badly, and I'm so worried about picking the wrong leader or weapon, that I dial high. And win I do. But the victory is short-lived. I've sent so many troops to the cloning tanks that I can't defend my gains. And as the poverty-stricken Fremen, it's going to be a long time getting them back.

I spend the remaining two hours of the game sidelined, a bit player with little to offer. By the time the Bene Gesserit take the victory, I'm long since bored.

Now I know, after other games, that I made a rookie mistake. Throwing everything into a battle early in the game is suicidal for most factions. In future games, I aimed to play as the Atreides. That faction can track what cards other players are holding, and can ask to see one of their choices during battle. It helped, but not a whole lot: there's still a staggering amount of dark, illuminated by only the tiniest, flickering candle.

And every time I play Dune, I'm more afraid of the darkness than I take pleasure in the flame. That's my issue with it. You're invited in with brilliant combat resolution, non-random yet thrilling. Then it breaks you by withholding almost everything you need to know to make that decision. You might as well, in many cases, flip a coin and save yourself the agony.

Of course, a lot of people are going to counter that the agony is the whole point. And I get this: you see the same agony at the heart of many designs from the same team, from Cosmic Encounter to Borderlands. But in Cosmic, for instance, your game is likely done in ninety minutes and a single card can rescue you from a bad misjudgement. In Dune, the same misjudgement can put you out of a game that could last all day, with no chance to recover.

In playing Rex, Fantasy Flight's reworking of the Dune system, you could almost see the same gears turning in the producer's heads. The most significant rule changes made it much easier to claw yourself back from mistakes. In doing so, however, it not only unbalanced the factions but sucked much of the tension from the game. Like some piece of brilliant but ghoulish art, what makes Dune special is what makes Dune unbearable. The question is: who can stomach it and who can't?

Like many gamers, I spent a period dabbling in Go. I never liked it much. One of the biggest barriers was the opening, where the open sea of wood in which I could place my cool, smooth stones paralysed me with indecision. Another player told me once that you couldn't strategize during the early game but had to "feel" your way. Dune, with its pivotal moments balanced precariously on a crux of lies, has the same quality. Millions of people enjoy, even venerate Go despite my misgivings. I'll continue to appreciate the majesty of both games from afar.

Sagrilarus replied the topic: #301338 03 Sep 2019 15:16
Dune is one of those games where I have to remind myself (often out loud) that I'm not playing for money. Not knowing if your chosen leader is a traitor is pretty unnerving, especially if you're making a bold move. You really want control, but it ain't available for purchase!

And yeah, I've explained to my buddies that reading the book really enhances the game for the reason you mentioned above. The factions are really well painted in the book, so it adds a level of emotion to the game that you don't get with others. "You can't let the Harkonen win" has probably been said 10,000 times since this game came out.

I'm rereading it for the first time since '85 because I'm pretty sure someone in my group will buy one of the fresh new copies of the game.

charlest replied the topic: #301339 03 Sep 2019 15:36
I really enjoyed seeing two articles on Dune pop up close together. The multiple perspectives is interesting and your writing is always a pleasure to read Matt (as is Nate's).

Greg Aleknevicus replied the topic: #301344 03 Sep 2019 17:05
Very nice article, thanks! I agree with almost everything you said but came to the opposite conclusion -- I love the game. There are many reasons for this, but amongst them is that Dune has the courage to let you fail spectacularly and is unafraid to punish you for doing so.

san il defanso replied the topic: #301348 03 Sep 2019 18:39
The game is extremely unforgiving in the way Matt says. I think that's just fine, but its appeal is more limited than a lot of the fans realize. Most games with no luck also have very low ambiguity. Dune is not like that. It has no luck, but its ambiguity is through the roof.

Erik Twice replied the topic: #301361 04 Sep 2019 05:59
One of the things I always stress when teaching the game is that big fights with 10 troops on each side are suicidal and will make you lose the game. I specially point out to Harkonnen or Atreides attacking each other on the very first turns as an example of what not to do. After all 10 troops is half of your troops. You wouldn't bid half your money in an auction game, better not to do it here.

If one keeps that in mind, the game is punishing but it's hard to be out of contention.

Matt has mentioned Fremen, which actually subverts this somewhat. Their troops are free, unlike those of other factions, and they regenerate 3 of them for free each turn so losing 10 of them on the first couple turns is fine.

Sagrilarus replied the topic: #301365 04 Sep 2019 11:16
Yeah, the last two or three times I've played I've ended up being the Fremen (by random draw . . . it's getting stale) and the one thing I can say is that those troops just keep on marching in from that one side of the board, and I don't have to pay anyone anything for them. A nice feature of that particular faction.

Erik Twice replied the topic: #301382 04 Sep 2019 16:53
A note: The new edition has also changed Fremen's and Emperor's alliance powers in a way that makes the game more forgiving in these situations:

san il defanso wrote: It has no luck...

It has less luck than you might think for a game of this nature, but it does have its share: the traitor draw, the auction cards, and the spice cards* .

Noteworthy is the fact that all three are what I refer to as "German-style" luck: they randomize the situation rather than the outcome (i.e., "American-style" luck).

(* and the storm movement in some versions.)

san il defanso replied the topic: #301386 04 Sep 2019 23:41
Greg, you make an excellent point. Elsewhere in these forums, Sag has pointed out the difference in luck that comes before a decision is made, and luck that comes after. It seems like your distinction between German and American luck is similar.
Read More...