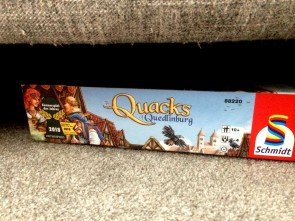 There are many reasons why some games are played a couple of times and then put to one side. Often the game just doesn't suit you or your games group or it doesn't meet the expectations you had. However, there are also games that are put to one side, but then get brought back to the table again after some time - and I want to look at what these games are for me and why I put them away for a while before getting them out again.

The first example of such a game is Scythe by Stonemaier Games. It's a pretty complex game, needing a lot of focus and planning ahead. It has an interesting setting and some clever indirect player interaction. It has resource management and area control. In fact, it has pretty much everything I want from a game like this. It ticks a lot of boxes for me.

So when I play Scythe, I get very excited. I am eager to win and more often than not, I feel I can win for most of the game, until eventually my engine stalls and everyone overtakes me. That's when the frustration sets in for me and I hate the game. I can't see what I could have done differently to change the outcome of the game. It's infuriating for me. I don't want to play it ever again - until the next day, when I have calmed down a little and wonder whether I was just unlucky with my player mat or something.

So I play it again, usually with the same result, and I hate Scythe again. Now, instead of wanting to play again the next day, it might take me a few more days to unclench and relax, and with every subsequent play and inevitable loss, the gap between plays increases.

Yet, I do always return to it and in fact, I can't wait to play it again with my friends online, despite the crushing defeat the last time we played. It's an interesting love-hate relationship for me when it comes to Scythe, but at the same time I can't see myself ever putting the game to rest for good. There will always be another time when I want to play it again.

When it comes to games like Small World by Days of Wonder or The Quacks of Quedlinburg by Schmidt Spiele, the reason why I stop playing for a while before getting the game out again is different. With these games it's more about replayability. It's a lot of fun playing them with friends. They're easy to learn and quick to play and don't require a lot of brainpower to enjoy them. They're light and airy.

Yet, play them more than a few times and you get bored of them. Even though both games have a good amount of variability, ultimately you're doing the same thing each time, without much variety. Smallworld probably fairs a bit better than The Quacks of Quedlinburg, but for both there comes a time when enough is enough and you put the game away.

However, neither game stays away for too long and both do make it back to the table eventually - and when they do, you remember how much fun you had playing them and you ask yourself why you didn't get them out sooner. That is, until you get bored with them again of course - and so the circle continues.

There is one last reason why I might put a game away and not get it out for some time and that has to do with the people I play with. I can't think of any specific examples, but I do think it's true for a lot of games, that you play them with a group of people over and over again and have a lot of fun. Eventually, your games group has explored the game fully and there is nothing left in the game to offer you. So you put it away.

However, then you meet new friends or maybe your family comes to visit and suddenly that game that seemed to have nothing left to offer is the perfect game again. As you play with this new group of people, you see the game in a different light - you see it through their eyes. Suddenly there are more things to discover, different ways to play it, that you previously didn't think possible.

Of course, even for those games comes the time when the new group of people also has discovered everything there is to discover in the game - and it gets put away as well. Yet, you never know when another opportunity offers itself to make this game the perfect game again.

What about you? Have you got games that you play for a while, but then put away, only to get them out again in the future? What games are they and why is it that they come out again? Please share your thoughts in the comments below. I'd love to hear why others keep their games and play them again at a later date.

I think one of the things you're bringing up here is learning mode vs. playing mode. Some games survive this switch and others don't, and I have no clear idea why. Some games are only good for a few games where you're discovering the game, but it feels discovered after a while. Other games enter a completely new game mode where it's about competing and gaining mastery once you learn...

A lot of times my first few plays before a break are the learning part... and I'm not sure if the game is going to come back up again and have a new life in the head to head mode.

Shellhead replied the topic: #311165 16 Jun 2020 12:04
Replay value is a high priority for me when deciding to purchase a game. I want a game that will offer variety of experiences over the course of numerous plays. Or at least offers some strategic depth or variable powers so I can try different strategies. So I am quick to drop a game after a few plays if the game feels scripted or samey or solved. The other type of game that I might set aside after limited play is a heavy, complex game that is difficult to get on the table due to the required commitment. I have avoided Scythe so far because it looks like a mediocre game that only became popular because of the distinctive artwork.

oliverkinne replied the topic: #311351 24 Jun 2020 08:10
Thank you for everyone's comments. It's funny how some games can just be played over and over again without getting boring, while others have to be put away for a while to be a fresh experience. It's often not even about variability. It's interesting.
Read More...