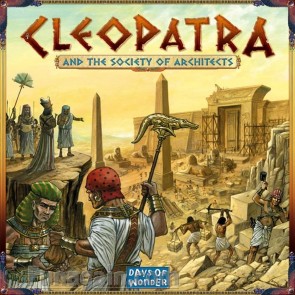 Once upon a time, when I had just discovered Euro games and there were far fewer of them in the world… when I had saved the requisite $50 so I could pay my share when ubarose and I combined orders for free shipping… I would spend my time diligently perusing each title on Thoughthammer website. Man, I miss Thoughthammer. Anywaaay…If a title caught my eye, I would studiously read the game’s description. Not once, not twice, but several times- often enough that I would pretty much commit it to memory. After all, these were important decisions to make. I had saved my money, and being the thrift hound that I am, I needed to make sure that this, possibly only one board game purchase of two I would allow myself during the year, included the best of the best. The games that I would want to play over and over again to ensure that I had gotten my money’s worth. Important decisions indeed.

Now let’s dial it back even more years. In order to appreciate this story, you need to know that my first degree was a Bachelor of Architecture from Virginia Tech (Go Hokies!). Where we spent many years playing lots of Monopoly and Risk, although that’s not the takeaway here- the key part is the Architecture piece. So how psyched was I to see a game entitled Cleopatra and the Society of Architects?! Aside from it being the clunkiest game name I’d encountered yet, I was nevertheless intrigued. What- a game about architecture?! YES, PLEASE!

So I decided to forgo my usual “need to play it before I buy it” rule, took a deep breath and told ubarose to go for it. I think that was the same day I ordered Through the Desert, aka Candy Camels. No memory of what ubarose chose, but my guess is that it included vampires or zombies or some such nonsense. Anyway, the carton arrived, we excitedly pulled out our games and there was this big beautiful box of Cleopatra! I couldn’t wait to get started.

On first opening I was enchanted.  Beautiful, if a bit plastic-y 3-dimensional pieces and the box was to be used as an integral part of the game- WOW! I’d heard tell that Niagara had also used this mechanic but I was too new to Euro-gaming to have tried that one.  We set up the box and board, arranged the quarry, shuffled the cards and read through the rules. Turn half the cards upside down and shuffle the deck again- WHAT?! This was some crazy stuff back then. But we did as instructed and the game began.

The card illustrations were nice, the game play was simple enough, the choices were not taxing, and once we embraced the fact that we would all eventually be corrupted that was no longer a point of trauma. The game played quickly enough, even at 5 (me, my kid, ubarose, her hubby and their kid) and it was simple enough for the kids, young at the time, to grasp quickly. There was a sacrifice or two, but the actions somehow lacked the drama I’d hoped for. We finished the game and the post-analysis was “eh”. I liked it more than anyone else in the group, but I was a bit sad; I really wanted to LOVE this game.

It’s made its way off the shelf a few times over the years; I even taught it at a Con last year but felt that I had to apologize to everyone who signed up to learn it, so I prefaced the teach by telling them “this is just an okay game…”. At some point several years ago ubarose offered to paint the bits but I didn’t want her to waste time on a game that rarely hit the table, so I declined her generous offer.

But with the return of the two kids to the home nests due to COVID and in search of 5-player games for our “bubble”, we pulled Cleopatra out again. And guess what? IT WAS FUN! Exactly what Dr. Fauci ordered- a cool looking game, with minimal tension (since we have enough of that in our daily lives) and best of all, we now have enough free time that ubarose aged and painted those too plastic-y bits! and they look AWESOME!

So yeah, Cleopatra and the Society of Architects is still a ridiculous name for a game, the game play is far from perfect, it’s not overly challenging, and I wish that there was a greater chance of rolling a sacrifice, but I stand before you today to declare that although it’s no Ticket to Ride (don’t be a hater), I LIKE THIS GAME AND I WILL NO LONGER BE ASHAMED TO ADMIT IT!

What games do you kinda dig but are embarrassed to stand up for?

Francie is gamer chick with a preference for train games, and a sucker for anything with good bits. She was the head of the LEGO Model Design Department in a previous life, and is now a Reference Librarian with the largest library board game collection in Connecticut. She is writing an article a month cause it makes her good friend ubarose happy.

Discuss this article
Log in to comment
Posts in discussion: Cleopatra and The Society of Architects or Why Am I Embarrassed to Admit That I Like This Game?

ubarose replied the topic: #314266 21 Sep 2020 10:18
The disappointing thing about Cleopatra and The Society of Architects is that it has all all these cool bits, but is actually a card game. You never get to really "play with" the cool stuff.

This was also what was most disappointing about Age of Mythology (anyone remember that one). It was a box of a bazillion cool mythological minis, but the game was mostly played with a handful of tiles representing buildings, with the minis rarely coming into play. I always felt that they should have done that in reverse. The buildings should have been minis and the heroes and monsters could have been tiles for as much as they got used.

Kemet did it right. The cool monsters are important and you get to play with them.

Sagrilarus replied the topic: #314275 21 Sep 2020 11:29
I liked Cleopatra. I bought it when it was new, when Days of Wonder lived up to their name and had that instantly recognizable look and feel. It's a good game, but a game you can play with pizza on the table and the Orioles losing on the TV. Plenty of room for socializing in spite of there not being a social aspect to the game.

It got sidelined after we played it three or four times, and oddly enough I bought a second copy when GameSurplus.com was unloading it for $10 a copy. It got me free shipping so it was more or less free. Sat on both for awhile, then traded both away when it became hard to find and people decided they wanted it again.

I'd pull it out again, and I think the corruption factor is a good idea that hasn't been used again, or at least I haven't come across it. We'd always total score first and then reveal corruption, because "winner or dinner" seemed like a more dramatic ending.

Shellhead replied the topic: #314282 21 Sep 2020 12:43
When I ponder buying a board game, replay value is always an important consideration. I don't want to play a game just a few times and then leave it gathering dust on a shelf. So I have learned to watch for certain elements that suggest replay value: asymmetric starting conditions, modular board sections/tiles, variable player powers, and maybe expansions.

ubarose replied the topic: #314285 21 Sep 2020 13:16
Francie is the most careful purchaser of board games that I know, and the most ruthless culler. She has been playing and buying board games for 20 years, but her entire personal collection fits into a single standard sized bookcase and two tubs (one of everything Ticket to Ride, and one of everything Railways of the World). Her games either get played often and regularly, or get traded for something that will be.

Cleopatra and The Society of Architects is her one anomaly.

dclose replied the topic: #314287 21 Sep 2020 13:47
I adore Cleopatra and The Society of Architects! And so does my game group. And no, we aren't investing in the reboot because the classic is perfect just as it is!

gilhova replied the topic: #314290 21 Sep 2020 14:20
This game has two of my favorite mechanisms: corruption (obvs) and a boxed deck of cards (cards that can come out of a deck face-down or face-up). I wish I could see them in more games; Phil Walker-Harding had a card-based dungeon crawl with both of those mechanisms a few years ago!