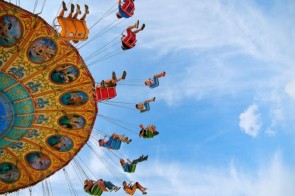 I think like pretty much every hobby, playing board games is about having fun. You might prefer to play solo, you might like to play with your partner or you have a group of friends you play with. You probably play different types of games with different people. Maybe you play lighter games with your loved one in the evenings, because you're both tired after work and want to have some relaxing time together, but when you play with your games group you want something complex and thinky to really stretch your brain. Ultimately though, I think it's all about having fun.

So the question is, where the fun of playing board games comes from. The answer is, as so often: it depends. Different people have different things they enjoy, and what someone enjoys also changes from day to day or hour to hour. When it comes to playing games, it will also depend on who you play with.

In my experience, people want to have a feeling of achievement and progression when they play games. In many games, you start with something very basic and simple and you slowly make it better and better. That's certainly true for engine building games, of course, but area control, deck building and even tile laying games can all give that sense of progression and achievement.

I would say that even in a game of Carcassonne, you do feel like you're progressing. You all build the map together, you add to your own cities, roads or monasteries. You place meeples and take meeples back when you score a feature. It feels like things grow in front of you and by the end of the game you feel like you've achieved a lot, even if you never achieve everything and some cities, roads or monasteries remain unfinished.

Fun can also come from beautiful illustrations, custom meeples, chunky dice, realistic resources or even from the ever-popular miniatures. A clean graphic design can also help with making a game more fun. The visual element is certainly important to me and I think a lot of people feel the same. It's not just the visual element, but often also the tactility. Rolling chunky dice, playing with metal coins, moving amazing miniatures or otherwise touching and physically interacting with the game can be a lot of fun.

I would even go as far as saying that for some people, visual appeal and tactility can be the main source of fun when they play games - at least sometimes. I think many of use have played a game that isn't actually that exciting or clever, but because it looks or feels great, we still had a lot of fun.

In a similar vein are IPs. A game that uses a popular book, film or other intellectual property can sometimes get away with actually not offering much in the way of gameplay or complexity or anything new and exciting, yet because the players love the IP, they love the game. I'm sure many of us seen this also.

Of course, that is not to say that great IPs always lead to terrible games, just like great artwork or components always mean the game itself is bad. When a great game is married with great artwork, components or IP, then it really shines, and there have been games like this that will have ticked all of the boxes for us.

Storytelling is also often very important to creating a fun experience. Some people I know just love spinning a story as we play a game. They seem to get most of their enjoyment from narrating what's happening and linking it all back to what happened earlier in the game. They don't care much about winning, but when another player's actions fit perfectly into the narrative the game has told so far, they are over the moon and have a lot of fun, and it's often those moments in a game that we all remember.

On the other side of all of this is that fun can come purely from the mechanisms and the gameplay. Some people love an abstract game much more than one with an amazing setting or theme. They get their fun from playing well and maximizing their turns, when they're most efficient with their resources or make the most points. Artwork, components, story and everything else has no impact on their enjoyment of the game.

Often, for these people, it's more about solving the puzzle that the game presents. They basically play solo, even when they're not playing alone. They probably enjoy multiplayer solitaire games just as much as solo games and just as much as multiplayer games, because really it's about how well they do on their turn and how efficient they are, rather than how well they play against other players.

Finally, I think there is a group of people for whom the fun comes from socialising with others. Spending time with friends or family, maybe a loved one, is more important than anything else about the game. To be honest, I think for many of us, that's at the core of playing games with others. So even when we enjoy a complex strategy game and love that we're playing really well and enjoy the wonderful art, ultimately the most fun we get is from being with a great bunch of people - even if these days it's not in person, but virtually.

In fact, I think that's why our hobby is so great. You can play games with complete strangers and have a good time. Each of you might see the fun in something different, but everyone has fun in their own way. Board games provide the shared interest that allows us to be together, even if we're all very different as individuals. Board games can be a focal point that allows us to be ourselves, or become someone else, while having fun.