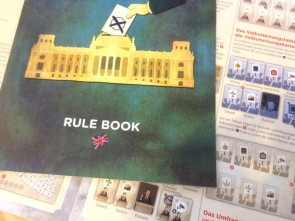 It is nice when you have a regular games group, be it friends or family or a mix of both. You get to play games regularly, you can share each others' collections, you can maybe even decide to buy games together and split the cost and there are many other positives when you have a group of people to play games with. What I want to talk about in this article, is why I think it's so wonderful to learn a new game together with a group of people you regularly play with.

I don't think many people like the learning part of playing a new game. It can be interesting and maybe people don't really mind, but it's more of a necessary evil, because everyone wants to get on with playing the game, than spend time reading rules or listening to a rules explanation.

Yet, when you have a games group that you see regularly, you will have found a way of dealing with learning rules. Every games group will have their own approach, which may differ from game to game, but often it's someone within the group who teaches the game. It could be the same person, because they're really good at teaching, or maybe it's whoever bought the game and wants to introduce it to the others. Maybe your group's rule is that everyone needs to learn a game in their own time and however works best for them, before you all play it together.

However, whatever it is, it's just nice that you know what's expected and between you, you have worked out a way that works well and that everyone is comfortable with.

Of course, learning the rules is only the first step. The next thing is to play the game and master it, which is another form of learning. Again, it's nice when you all start out at the same level when you start playing a game together as a group. Nobody is an expert yet, so everyone can explore their ideas, try out their strategies and find something that suits their play style.

Chances are, some people will grasp a game more quickly and get better at it faster than others. In our games group, there is someone who tends to really quickly grasp a game and they tend to win the first few times we play it. However, it still feels nice learning to master a game together. The person in our group who grasps games quickly finds it hard to express their understanding of the game, but nevertheless, we always discuss afterwards how we found our first play and what we've learned. We try and share what we've learned, so that next time we play we can all improve.

Over time, everyone will (probably) get better at the game, as you learn more with each play, but as everyone adjusts their strategies, you have to adapt to those changes. Again, it's really only something that happens when you play the same game with the same people. Together, you all improve your understanding of a game and as you do, you change the way you play, which in turn affects how the game works for you as a group, which means everyone has to find new ways of winning that are no longer available, because other players have learned to defend themselves against your previous approach.

It's a wonderful dynamic, where everyone needs to adapt to everyone else's changes in approach. I suppose, you do get something similar when you play the same game with different people. Suddenly, a strategy that always meant victory for you doesn't work any longer, because the new people you play with play the game differently, forcing you to find a new solution. The problem is, you can never test that new solution again, if you don't play with those people again.

Another wonderful thing about playing with the same group of people regularly, is the feeling when you finally win a game, after trying and failing many times before. I remember finally winning chess against my brother. It wasn't so much about defeating my brother, even though that did play a part, of course, but more about being able to win at chess, which I had never won against him and generally usually lost whoever I played with.

Winning a game that you usually lose is a great feeling, but winning that game against the same people you played many times before feels even better, because they have shown how well they play the game up until that moment when you finally clinch victory.

That makes me sounds like a bad winner, but rest assured, I rarely win games, so I think I am allowed to enjoy a victory, when it does eventually happen. So when I do win, I don't jump up and do a victory lap, I don't pump my fists in the air and I don't rub it in.

Ultimately, for me playing games with a regular group of people is very much about sharing an experience together and learning something new as a group. It's the social aspect, that's important, and the fact that there is something to look forward to for me each week. Not that there is nothing else for me to look forward to, but my regular games evening is definitely important to me and I cherish the friends who share that time with me.

I'd love to hear if you have a regular games group yourself. How often do you meet? How do you approach learning new games? What do you like about your games group? Please share your thoughts in the comments below.

Then each group member learns a different way. My wife's eyes glaze over after 5 minutes of rules and just wants to play while I'm trying to give them a framework of the game.

I should probably make up rules cheat sheets ahead of time for each person or give them the UH rules summaries.

People are the best and worst thing about the hobby. LOL

the_jake_1973 wrote: As the person in the group who buys the games, I end up learning in by running solo and then passing my knowledge on to the group. I've tried sending rules ahead of time, but people don't want to read them.

Then each group member learns a different way. My wife's eyes glaze over after 5 minutes of rules and just wants to play while I'm trying to give them a framework of the game.

I should probably make up rules cheat sheets ahead of time for each person or give them the UH rules summaries.

People are the best and worst thing about the hobby. LOL

This is virtually me and my group

- I even have one person (not a partner) that doesn't want the rules explained in too much detail but now, after several fiascos, I tell him to pull his head in as I remind him of all the times I've had to explain basic things to him in previous games because we skipped the rules.
I buy them because I am the full on thematic boardgamer that needs to have as many great games as I can make an excuse for owning, while the other three really enjoy playing them but play so many other genres (rpg, tabletop minis, video) that they are quite happy for me to be the library,

the_jake_1973 wrote: It is a thankless job we have, Southernman. Stay strong, bruv!

I'm a strong (but fair-ish) fucker so keep them all on the straight and narrow, it helps in the end as at least two of them have a pretty good memory for rules (as good if not better than me) and will keep the game running without too many rulebook dives. It also helps that we all play for the fun rather than only for the win, we play hard during it but the game experience is the aim.

Jackwraith replied the topic: #319048 09 Feb 2021 18:32
I've been complimented a couple different times about how clear my rules explanations are. I think it's because I practice. I read through the rules and then map out how I'm going to deliver them to my impending audience. I even do it with games I'm already familiar with or have played before, just so that I know that the next time I'm explaining, I can minimize the amount of eye glazing or people failing to enjoy the experience because they're not sure about what's going on.
Read More...