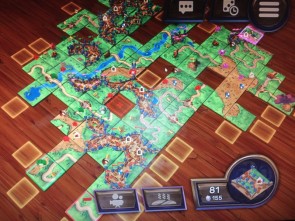 Many of us have taken to playing online when the pandemic started to take hold and moved regular games nights into the digital world. I have written about different online board game platforms and their pros and cons in previous articles and you can find out which games I personally play online, but this time I want to focus on so-called play-and-pass games, where you don't play a game with others at the same time, but everyone takes their turn when they have time and log off again. It's a bit like old-school postal games, but with a digital twist.

We all know how to play games with someone in real-time. That's what we do when we meet up and play a board game face-to-face and it's what many of us have also done online, when we were no longer able to get together in person. When you play real-time, you take your turn and then pass to the next player, who takes their turn and then passes to the next and so on. As I say, it's what we're used to. That way you usually play a game in one night or in a day.

Some longer games you may split over several days, leaving everything set up or using some sort of save procedure where you pack everything away in a certain way, so that it's easy to set everything up again the next time you all get together to continue the game. It's also what you might be used to from campaign games, for example.

The important part of real-time gaming is that you're all there together - either physically or virtually - or maybe even a combination of both, I suppose.

Play-and-pass is different. Yes, you still take your turn and then pass to the next player, but that player is probably not there with you and isn't even there at the end of a voice, video or other chat. The other player may be in bed and they will take their turn when they have time again to do so.

The benefit of this mode of playing is that you don't have to arrange a day and time for everyone to be available. Everyone plays when they have the time and inclination to do so. Chances are that you will have agreed on a maximum time between turns, at least roughly, say for example one turn a day. That way you will roughly know how long the game is going to take and if players take their turns more frequently, then that's great.

That's how postal games used to be played. Chess is famous for this. Players would make their move, write it on a postcard or in a letter and send it to the other player. As soon as they received the post, they would execute the move of the first player on their board and then take their turn, again posting their move to their opponent. It would go backwards and forwards until the end of the game. Players would usually agree that every move would be sent within a week, for example, so that there was a reasonable limit to how long the game would take overall.

Taking this into the digital age, there are many online gaming platforms that allow for play-and-pass games. These platforms either leave it up to players to decide what the timeframe for turns is or they will enforce a certain timeout, say one turn every 24 hours, and anyone who takes longer will forfeit the game. That's not always possible, of course, but it's an option for some games.

Some digital games will replace players with AI opponents, if their time has run out. That can be quite confusing at first, but is useful as the other players can continue to play and don't just happen to win by default, simply because the other player took too long. It's a more satisfying way of ending a game, because you get to play to the end and don't stop it early.

Other platforms implement a sort of very long chess clock, where every player has a certain amount of time for the whole of the game. As soon as a player has taken and confirmed their turn, their clock would stop and the next player's clock start. For play-and-pass games, these clocks are usually set to a number of days, depending on how frequently players believe they will be able to take their turns, because if someone isn't around for a while, their clock will continue to tick down mercilessly.

Using a chess clock is also useful in real-time online games, but is less popular there. However, for longer games, it can be useful to set a number of hours for every player to complete the game in, so that everyone can be assured that the game will finish by a reasonable time in the evening and not drag on into the early hours of the next morning.

I do love play-and-pass games, but I do always make it clear that I will take a few turns a week. I will aim for one turn a day, so seven turns in a week, and I often play more quickly than that, but I don't always have time, so I want to set the right expectations from the start.

To be able to successfully have a play-and-pass game, you need to be able to easily see what other players have been doing and generally what has happened in a game up to the point when it's your turn again. In a card game, for example, it's important that you can check discard piles, because it's unlikely you will remember what you played the day before, for example. So games whose rules forbid looking at discarded cards don't usually work well in a play-and-pass format for that reason.

However, it is important to try and remember your strategy when gaming in a play-and-pass format. It's not always easy though and I find that I usually just play a single turn, meaning that I take an action that makes sense at that point in time, rather than considering the strategy that I might have had in my head at the beginning of the game but have since forgotten.

Of course, some games lend themselves more easily to play-and-pass, while others are really only possible in a real-time setting. Yet, I do think there is a lot to be said for play-and-pass. It has allowed me to play a lot of games with a lot of different people and learn new things with each game. It also allows me to play some games more often before I review them, which is useful to me.

So, if you haven't tried play-and-pass yourself, then give it a try. You may find it another way of playing your favourite games or learning new ones.