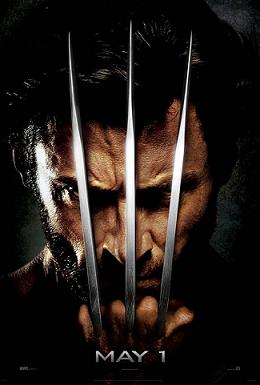 The last time we saw Wolverine on the big screen, he was leading his merry band of mutants in the underwhelming X3.  And X3 made no bones about it; even if the movie series had always been Wolvie's show, X3 made a point to remove everyone else who would upstage the furry mutant.

Even though it probably would have been best to leave things alone for awhile, the franchise now continues with X-Men Origins: Wolverine, which the studio is no doubt hoping to make a lucrative franchise of its own.  And why not?  The X-Men movies have made over 1.1 BILLION dollars worldwide, and by keeping things going with "Origins" stories, they can tread 'safe' narrative ground with a pared down (and more affordable) cast.


X-Men Origins: Wolverine tells the backstory of Logan, from the time he was a sickly boy, through his relationship with one Victor Creed, his roles in various wars, and ultimately the chain of events that left him the nearly undestructable but completely memory-wiped mutant introduced in the first X-Men movie.


At first, the movie starts out fairly strongly.  I enjoyed the early scenes, particularly the montage depicting Logan and Victor taking part in various wars.  With each passing war, Victor grows more visious and savage, and it's obvious that at some point the two of them will have to part ways.  Soon enough, Victor crosses the line and both of them find themselves rotting in prison.  Enter one William Stryker, a name that should be familiar to fans of the movie franchise as the chief villain in X2.  To be honest, I almost expected them to lazily slop together that part of the story and even possibly forget it was Stryker who was involved with Logan's transformation, but the script definitely follows the same continuity to a tee (sometimes laborously so.)

By the time the movie reached the "initial incident" that essentially set Logan down the path that would lead him to be Wolverine, I was sitting in the theater wondering how the reviews for the movie had been so savage.  Here was a decent movie, little heavy on the fanservice, but an origin pic nonetheless that was shaping up pretty nicely.


Unfortunately, the movie was only half over at that point.  And from then forward, it becomes an umitigated--almost amateurish--mess.  By the time the credits had rolled (with a completely pointless "after the initial credits" scene)--I was left wondering, "what the hell was THAT?"


The problem is that the movie has a definite origin, and knows where it's heading, but seemingly had no good idea on how to provide that story with a decent climax, or one that would be satisfying to movie-goers.  After all, we know that William Stryker can't die, and we know that Wolverine ends up wandering around with little or no memory of his past, so having a movie with a fitting conclusion must have been challenging.


As I was leaving the theater I thought more about it and realized that the reason origin stories are generally strong is because they're more or less set in stone.  Bruce Wayne didn't just one day decide to become Batman--his parents were killed and that sent him on his path.  Superman wasn't some guy from Jersey who got toxic gunk spilled on him--he's an alien sent to Earth by Krypton.  So it's hard to screw that up, really.  Sure, you can play with it some--Peter Parker's organic web shooters--but for the most part the 'heavy lifting' has been done for you.

Origin movies do seem to stumble because they're often so front-loaded that it leaves little for their official "first adventure."  Even the better ones like Superman and Spider-Man show weaknesses in their second half.  The difference is a good director can overcome this narrative weakness, if the script isn't too bad.

The problem with X-Men Origins: Wolverine is that A.) It has some workman-level director at the helm and B.) the second half of the script really is atrocious.  I don't want to give anything away, but let's just say that the movie goes beyond the realm of believability by making Stryker a master-mixer of human/DNA cocktails.

What you're left with is a story that can't have a good conclusion that gets there via a ridiculous series of "I'm sure the director thought this looked bad-ass" scenes and then coincidences where characters just happen to go (or be, or end up) exactly where they need to be for the next scene.  There's one sequence at the end where two characters are in completely different locations; at the conclusion of the scene, one of them turns to find the other one right there, not missing a beat.  When you see just exactly the circumstances, you'll realize how ridiculous this is.  It would be like you and a buddy being 10 blocks apart, and you turning ten seconds later to see him right behind you.


I think the cardinal sin that the movie makes is the same that Mortal Kombat: Annihilation made--and that's not good company to be in.  Mortal Kombat: Annihilation tried to literally take things from one medium and clumsily shove it as is on the screen...so you get things like Raiden doing a torpedo push in the film and it looks completely ridiculous.  Ditto here; the final battle probably would have actually made for a decent series of kick-ass panels, but as it is directly portrayed on the screen it comes across as fake, over the top, and a total amateur-hour production.  (Special shout out goes to the Blob, who shows up in probably the worst fat costume you will ever see.  Again, a case of the director taking the extremes of comic bookdom and trying to put it literally on the screen. Oh, and the most forced working in of the term "Blob" you'll EVER see, bar none.)

Anyway, so you're really dealing with what feels like two different movies here, and you can thank the strength of the first half on Wolverine's established character and backstory and the performance of Hugh Jackman, who really does show up and gives it his all in the titular role.  There are some cameos in the film, including the much ballyhooed appearance by Gambit who ultimately adds little to the movie and is played by a guy who isn't even in the same ballpark acting and charisma-wise to Jackman.  There is also a surprise cameo that I wasn't aware of that was a nice surprise (you'll know it when you see it.)

Like I said, the continuity is nice--things are addressed, such as why Cyclops wouldn't know Logan later on.  Some things are not addressed, one thing in particular--how Victor Creed went from the sardonic slayer in this story to the nearly dumb as a rock version in the first X-Men movie.  There are some easter eggs for fans of the franchise--pay very close attention during the scenes that take place with mutants locked away and you'll see several hidden things.


It really is too bad the filmmakers had no idea how to provide this story with a good place to go, and it's worse that this is what they came up with.  So you're left with a movie that has a few good bits but mostly is one Origin story you can likely do without.


They're already planning a similar origin movie for Magneto; if this is the level of effort they plan on putting into it, I say just let the franchise die and reboot it in ten years.  Wolverine and the X-Men deserve much better than this.